Categorized as
15149
Tagged as
CaliforniaconservationEndangeredevidencetodayWashington
Related

Conservation groups today hailed protection of 9.6 million acres of critical habitat for the threatened northern spotted owl across federal lands in Washington, Oregon and Northern California, but were deeply disappointed by the exclusion of all private and most state lands, resulting in a 4.2 million cut from the proposed designation. The owl has continued to decline since being protected under the Endangered Species Act in 1990, in part because of continued loss of habitat on private and state lands. 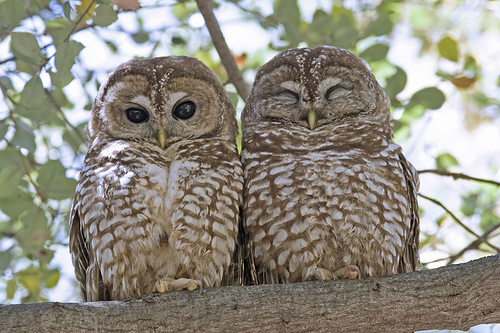 “The forests that owls depend on are the same forests we cherish for clean drinking water, habitat for salmon and other wildlife, and outdoor recreation with our families,” said Joseph Vaile, program director of the Klamath-Siskiyou Wildlands Center in Ashland, Ore. “We need to focus on protecting and restoring our remaining mature and old-growth forests across all lands, so we can recover endangered wildlife and produce sustainable jobs in rural communities.”

Today’s designation replaces a 2008 designation by the Bush administration that had ignored years of scientific evidence showing that spotted owls in the Pacific Northwest needed more, not less, old-growth forest habitat protection, and had slashed a 1992 designation of nearly 7 million acres by more than 1.5 million acres. This cut of critical habitat was based on a recovery plan for the owl that was widely criticized by the scientific community and revealed in congressional hearings to have been the product of direct political interference designed to undermine the protective measures of the Northwest Forest Plan. Conservation groups successfully challenged the 2008 designation, resulting in today’s designation, which is a substantial increase from both previous designations.

“In restoring extensive protections on federal lands, today’s decision, protecting millions of acres of habitat for the spotted owl, marks the end of a dark chapter in the Endangered Species Act’s implementation when politics were allowed to blot out science,” said Noah Greenwald, endangered species director at the Center for Biological Diversity. “It is, however, deeply disappointing that the Obama administration has elected to exclude all private and most state lands, which are absolutely essential to the recovery of the spotted owl and dozens of other wildlife species.”

While the final rule restores protections to essential federal lands, it fails to fully account for and implement the recovery goal of critical habitat because it proposes to exclude far too much habitat on non-federal lands. Many of these lands provide essential habitat for the owl; many private lands in the “Redwood Coast” region, for example, are absolutely essential because the owl can nest in younger trees with redwoods and the owl’s productivity is consistently higher in the redwood zone as compared with the remainder of the range.

“The evidence is overwhelming that redwood forests are essential to the conservation of the species. Leaving them out of the final rule is a big mistake,” remarked Andrew Orahoske, conservation director for the Environmental Protection Information Center.

Conservation groups also remain concerned about statements in the proposed critical habitat rule calling for “active management” of spotted owl critical habitat, including logging. The scientific basis for logging existing spotted owl habitat to benefit the species remains questionable, at best, with numerous studies demonstrating the owl is sensitive to logging of its mature and old-growth forest habitat.

“The owl needs these areas of protected habitat to survive,” said Steve Holmer, senior policy advisor for American Bird Conservancy. “We remain concerned, however, that Fish and Wildlife may allow increased logging in critical habitat, which could also imperil the threatened marbled murrelet, and help the spotted owl’s competitor, the barred owl.”

At most, 20 percent of the Pacific Northwest’s original old-growth forests remain. In addition to providing critical habitat for spotted owls, salmon, steelhead and other species, mature and old-growth forests are important sources of clean water and help reduce global warming.