Categorized as
4788
Tagged as
ChinainformationWWF
Related

A total of 380 Yangtze finless porpoise have been visually identified during a survey expedition along the Yangtze River, marking a significant decline from a previous research in 2006, according to initial results. 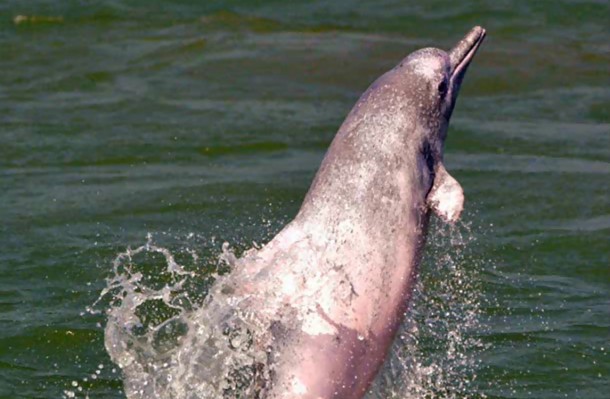 “There is a notable downtrend in the population size of the finless porpoise based on our observation,” said Wang Kexiong, deputy head of the research expedition and an associate researcher at the Chinese Academy of Sciences’ Institute of Hydrobiology (IHB).

Two survey ships docked at IHB’s wharf in Wuhan of Hubei on Monday, concluding a 44-day and 3,400km round-trip voyage between the Chinese cities of Yichang and Shanghai.

Results of the expedition, including the population of the finless porpoise in the Yangtze River, are to be made available in about two months after sufficient analysis, said Wang.

“Compared with the 2006 survey, the distribution areas of finless porpoise remains roughly the same, with signs of scattering in some parts,” said Wang.

There are fewer finless porpoise in the mainstream of the Yangtze while more discoveries have been made in wharf and port areas.

“That could be attributed to rich fish bait resources there. Busy shipping traffic in the mainstream, especially in port regions, poses a threat to the survival of finless porpoise,” said Wang.

“Such shipping traffic volumes would become a potential threat to the finless porpoise who rely on their sonar system to survive,” said Zhang Xinqiao, expedition team member and WWF finless porpoise programme officer.

The team encountered 9,643 cargo ships and 736 fishery ships during voyage, which ran from 11 November – 23 December 2012.
.
Researchers found dense distributions of finless porpoise in waters that are not open to navigation, such as the Jiajiang River, and attribute this to less human disturbance.

Less optimistic was the discovery of illegal fishing practices in these areas, including traps that could affect finless porpoise.   .

“Generally, the finless porpoise are scattered in the Yangtze mainstream, with a small group of them living in a comparatively narrow area. Such an isolation is not necessarily a positive thing for their reproduction,” cautioned Wang.

The scattered distribution pattern could be the result of shipping traffic that made migration harder, projects that altered hydrological conditions in the middle and lower reaches and habit loss, said Wang.

The findings on the number of population and variation trend are to be finalized according to a model that takes validity of calculation, density of distribution, width of the river, sailing length and areas covered into consideration.

The results are to contribute to the drafting of Action Plan for the Yangtze Finless Porpoise Conservation by the Ministry of Agriculture and proposals concerning the conservation areas.

Led by China’s Ministry of Agriculture and organized by the IHB, WWF and Wuhan Baiji Dolphin Conservation Fund, the expedition first set sail on 11 November and comes only six years after the Baiji dolphin – another rare cetacean and close relative of the finless porpoise – was declared functionally extinct.