The Ex-Director of J.R. Simplot and team leader at Monsanto, Caius Rommens, has revealed the hidden dangers of the GMO potatoes he created, in a wide ranging interview for Sustainable Pulse, on the same day that his book ‘Pandora’s Potatoes: The Worst GMOs’ was released on Amazon. 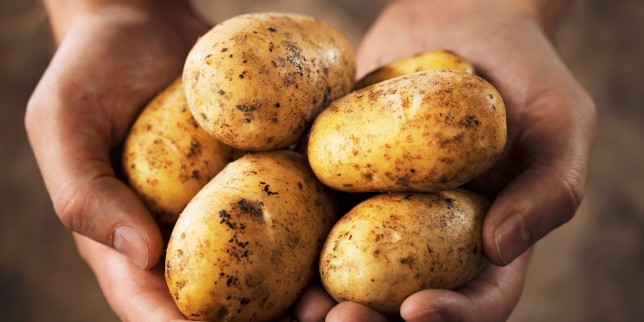 How many years did you spend working on creating GM potatoes? Was this all lab-based work or did you get out to see the farms that were growing the potatoes?

During my 26 years as a genetic engineer, I created hundreds of thousands of different GM potatoes at a direct cost of about $50 million. I started my work at universities in Amsterdam and Berkeley, continued at Monsanto, and then worked for many years at J. R. Simplot Company, which is one of the largest potato processors in the world. I had my potatoes tested in greenhouses or the field, but I rarely left the laboratory to visit the farms or experimental stations. Indeed, I believed that my theoretical knowledge about potatoes was sufficient to improve potatoes. This was one of my biggest mistakes.

Have the GM potatoes you helped create been approved by the FDA and EPA in the U.S. or indeed elsewhere in the world?

It is amazing that the USDA and FDA approved the GM potatoes by only evaluating our own data. How can the regulatory agencies assume there is no bias? When I was at J.R. Simplot, I truly believed that my GM potatoes were perfect, just like a parent believes his or her children are perfect. I was biased and all genetic engineers are biased. It is not just an emotional bias. We need the GM crops to be approved. There is a tremendous amount of pressure to succeed, to justify our existence by developing modifications that create hundreds of millions of dollars in value. We test our GM crops to confirm their safety, not to question their safety.

The regulatory petitions for deregulation are full with meaningless data but hardly include any attempts to reveal the unintended effects. For instance, the petitions describe the insertion site of the transgene, but they don’t mention the numerous random mutations that occurred during the tissue culture manipulations. And the petitions provide data on compounds that are safe and don’t matter, such as the regular amino acids and sugars, but hardly give any measurements on the levels of potential toxins or allergens.

The Canadian and Japanese agencies approved our GMO potatoes as well, and approvals are currently considered in China, South Korea, Taiwan, Malaysia, Singapore, Mexico, and the Philippines.

What was your role at Monsanto and J.R. Simplot?

I led a small team of 15 scientists at Monsanto, and I directed the entire biotech R&D effort at Simplot (up to 50 scientists). My initial focus was on disease control but I eventually considered all traits with commercial value. I published hundreds of patents and scientific studies on the various aspects of my work.

Why did you leave firstly Monsanto and then later J.R. Simplot?

I left Monsanto to start an independent biotech program at J.R. Simplot, and I left J.R. Simplot when my ‘pro-biotech’ filter was wearing thin and began to shatter; when I discovered the first mistakes. These first mistakes were minor but made me feel uncomfortable. I realized there had to be bigger mistakes still hidden from my view.

Why have you decided to reveal information about the failings of GM potatoes after spending many years creating them?

I dedicated many years of my life to the creation of GMO potatoes, and I initially believed that my potatoes were perfect but then I began to doubt. It again took me many years to take a step back from my work, reconsider it, and discover the mistakes. Looking back at myself and my colleagues, I believe now that we were all brainwashed; that we all brainwashed ourselves. We believed that the essence of life was a dead molecule, DNA, and that we could improve life by changing this molecule in the lab. We also assumed that theoretical knowledge was all we needed to succeed, and that a single genetic change would always have one intentional effect only.

We were supposed to understand DNA and to make valuable modifications, but the fact of the matter was that we knew as little about DNA as the average American knows about the Sanskrit version of the Bhagavad Gita. We just knew enough to be dangerous, especially when combined with our bias and narrowmindedness. We focused on short-term benefits (in the laboratory) without considering the long-term deficits (in the field). It was the same kind of thinking that produced DDT, PCBs, Agent Orange, recombinant bovine growth hormone, and so on. I believe that it is important for people to understand how little genetic engineers know, how biased they are, and how wrong they can be. My story is just an example.

Will GM potatoes not lead to larger yields and bigger tubers?

I somehow managed to ignore the almost daily experience that GM potatoes were not as healthy as normal potatoes. They were often misshapen, stunted, chlorotic, necrotic, and sterile, and many GM plants often died quickly. One of the reasons for this genetic inferiority is that GM potatoes are derived from ‘somatic’ cells, which are meant to live for only one season (to support a stem or leaf structure). These cells don’t have the genetic integrity to create new plants (like pollen cells and egg cells). So, by transforming somatic cells, we created GM potatoes that contained hundreds of genetic mutations, and these mutations compromised yield. Additionally, the genetic modifications often have ‘unintended’ effects that negatively affect both the agronomic performance and nutritional quality of a crop.

GM potatoes are meant to be bruise resistant, isn’t this a big benefit to farmers and food producers?

Normal potatoes easily develop damaged tissues that are entry points for pathogens and exit points for water. I believed that the GM potatoes were bruise resistant but now understand I was wrong. The GM potatoes bruise just as easily as normal potatoes, but the bruises are concealed. They don’t develop the dark color that helps processors identify and trim them. I didn’t understand that my potatoes were incapable of depositing melanin, a protective compound, when damaged or infected. More importantly, I didn’t understand that the concealed bruises accumulate certain toxins that may compromise the nutritional quality of potato foods.

Are the biotech traits in GM potatoes genetically stable?

A trait is stable only if it fits in the natural environment of the plant genome. If it doesn’t fit, which is often the case with GM crops, the trait may get silenced or recombined. My ex-colleagues at Syngenta and Monsanto often told me about their (under-reported) problems with GM corn and soybean, but none of their crops were as unstable as the GM potatoes. Two of the potato traits have already been lost and several others appear to be weakening.

Late blight resistance in GM potatoes has been sold as a major breakthrough, surely this is the case?

Late blight is one of the very few plant diseases that speak to the imagination, mostly because it caused major famines in Europe that forced millions of Europeans to migrate to the United States. But that was in the 1840s. Late blight is not a big issue where most potatoes are grown in the United States, which is in the arid Northwest, and late blight represents a manageable issue in the minor, more humid potato growing regions. Farmers there would like to have access to late blight resistant potatoes, but they would still have to worry about dozens of other diseases and pests that can be equally harmful.

My concern is that any attempt to promote the production of GM potatoes in humid regions (as vulnerable as Bangladesh and Indonesia) would actually increase rather than reduce disease issues. Furthermore, late blight is one of the most dynamic pathogens affecting agriculture. It is known to quickly evolve around any barrier to resistance. Therefore, the efficacy of a late blight resistance gene can never be guaranteed, and the resistance gene can be broken at any moment. In fact, some European and Middle American strains have already broken the resistance.

Are GM potatoes less carcinogenic, as suggested by the GMO industry?

I guess that many people will ask themselves: are potatoes carcinogenic? I don’t think there is any evidence for that. So, an even more interesting question is: why would GM potatoes be promoted as less carcinogenic?

Do GM potatoes include a legally acquired gene?

I mostly modified potatoes by using their own DNA. In other words, I used the DNA of a public variety to create a proprietary variety. This strategy may be ethically problematic but is legally acceptable. However, one of the genes that were used to create the GM potatoes is derived from a unique wild potato plant that grows in Argentina. I believe that the attainment and patenting of this gene without permission from Argentina was an act of biopiracy.

Is it possible for GM potatoes to cause gene-silencing in other potatoes or pollinating insects such as bees?

The problem with certain insects, including bees, is that they cannot degrade the small double-stranded RNAs that cause gene silencing. These double-stranded RNAs were intended to silence several potato genes in tubers, but they are likely to be expressed in pollen as well. So, when the pollen is consumed by bees, the double stranded RNAs in this pollen may silence bee genes that share inadvertent homology.

Your new book Pandora’s Potatoes, which is available to the public for the first time this week, includes many points as to why the GM potatoes you helped create should not be grown by farmers or eaten by the public. What would you like to say to the FDA and EPA?

The main problem about the current process for deregulation of GMO crops is that it is based on an evaluation of data provided by the developers of GMO crops. There is a conflict of interest. I propose that the safety of GMO crops is assessed by an independent group of scientists trained at identifying unintended effects.

Where can people find your new book ‘Pandora’s Potatoes’?

The book is now available on Amazon.