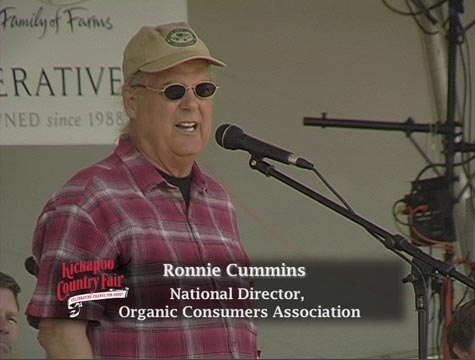 How should Californians vote on Proposition 37 and why?

Californians should vote Yes on Prop. 37 because it is their right to know what is in their food, and how it is being produced. A recent French study by Gilles-Eric Séralini, has shown that rats fed a lifetime diet of genetically modified corn had drastically increased their chances of tumors, cancer, and liver problems. This study also noted changes in sex hormones. A Russian study by Maria Konovalova found evidence that would suggest that multi-generational diets consisting of GM soy can lead to reproductive issues. Furthermore, a vast majority of the genetically modified crops in America are modified to be resistant to a pesticide called glyphosate (known commercially as Roundup). These “Roundup ready” crops can then withstand being sprayed several times in their life cycle, increasing the amount of the chemical residues left in the plant when it reaches the consumer. Glyphosate has been linked to many health issues. A study published by the Institute of Science in Society has found that glyphosate exposure, even at extremely low amounts, can lead to birth defects, reproductive problems, cancers such as non-Hodgkin’s lymphoma, and Parkinsonism. With all of these studies pointing towards adverse health effects associated with genetically modified organisms (GMOs), it is only fair that consumers are given the opportunity to choose whether or not to consume them, and the only way they can do that, is by requiring a label on foods that contain these GMOs.

What difference will it make to companies such as Monsanto if foods that contain GMOs are labeled in California?

The effect to Monsanto will be determined by the market, and the way Monsanto, and other companies producing GMO seeds, react to the market. Passing Prop 37 will likely radically reduce the market share for GMO seeds and food ingredients. The point of Prop 37 is to inform consumers what is in their food, and allow them to choose what they buy.

Has the latest research published by Prof. Gilles-Eric Séralini had any influence on public opinion regarding the Proposition 37 ballot, in your opinion?

I think that the study published by Prof. Gilles-Eric Séralini has opened the eyes of many consumers to the adverse health effects of GMOs, and the need for long-term independent studies of the effects of GMOs on humans. However, polls have consistently shown that over the years Americans have remained 80-90% in favor of labeling GMOs.

Who are the main supporters behind the ‘No’ campaign alongside Monsanto?

Other than Monsanto; DuPont, Bayer, Dow, Syngenta, and BASF are the largest contributors to the “No on 37” campaign. These are all chemical companies who benefit from the GMO industry by either producing GMO seeds, or producing the pesticides associated with GMO crops. Coca Cola, PepsiCo, Kellogg, Conagra, H.J. Heinz, General Mills, and Smuckers, are also supporting the “No on 37 campaign. This is because they all use ingredients derived from GMO plants in their products.

What do you think will be the reaction of consumers if the ‘Yes’ campaign is successful?

The main point of Proposition 37 is that consumers will have the choice of whether or not to purchase foods containing GMOs. Considering the evidence against GMOs, I think consumers will choose to buy products that do not contain GMOs.

*Proposition 37, a Mandatory Labeling of Genetically Engineered Food Initiative, is on the November 6, 2012 ballot in California as an initiated state statute.

If Proposition 37 is approved by voters, it will: