In a study published in “Food and Chemical Toxicology”, researchers led by Professor Gilles-Eric Seralini from CRIIGEN have found that rats fed on a diet containing NK603 Roundup tolerant GM maize or given water containing Roundup, at levels permitted in drinking water and GM crops in the US, developed cancers faster and died earlier than rats fed on a standard diet. They suffered breast cancer and severe liver and kidney damage. 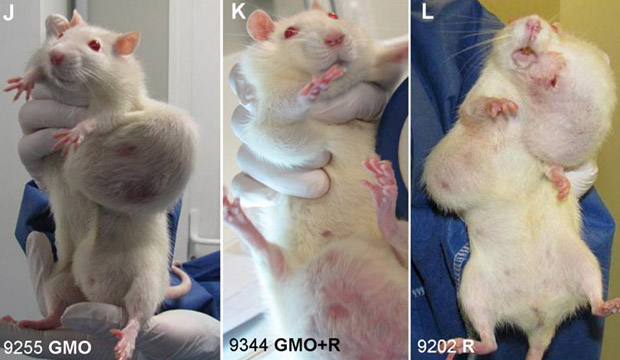 In the first ever study to examine the long-term effects of Monsanto’s Roundup herbicide and the NK603 Roundup-resistant GM maize also developed by Monsanto, the CRIIGEN scientists found that rats exposed to even the smallest amounts, developed mammary tumors and severe liver and kidney damage as early as four months in males, and seven months for females, compared with 23 and 14 months respectively for a control group.

Led by Professor Seralini, the researchers studied 10 groups, each containing 10 male and 10 female rats, over their normal lifetime. Three groups were given Roundup – developed by Monstanto – in their drinking water at three different levels consistent with exposure through the food chain from crops sprayed with the herbicide. Three groups were fed diets containing different proportions of Roundup resistant maize at 11%, 22% and 33%. Three groups were given both Roundup and the GM maize at the same three dosages. The control group was fed an equivalent diet with no Roundup or NK603 containing 33% of non-GM maize.

Dr Michael Antoniou, molecular biologist and gene expert at Kings College, London, and member of CRIIGEN stated: “This is the most thorough research ever published into the health effects of GM food crops and the herbicide Roundup on rats. It shows an extraordinary number of cancers developing earlier and more aggressively – particularly in female animals.  I am shocked by the extreme negative health impacts.”

“The rat has long been used as a surrogate for human toxicity. All new pharmaceutical, agricultural and household substances are, prior to their approval, tested on rats. This is as good an indicator as we can expect that the consumption of GM maize and the herbicide Roundup, impacts seriously on human health,” Antoniou concluded.

The report states: “Similar degrees of pathological symptoms were noticed to occur from the lowest to the highest doses suggesting a threshold effect. This corresponds to levels likely to arise from consumption or environmental exposure, such as either 11% GM maize in food, or 50ng/L of glyphosate in R-formulation [the lowest concentration of Roundup in the rats’ drinking water] as can be found in some contaminated drinking tap water, and which falls within authorized limits.”

The research findings raise serious questions about the current regulatory process for licensing industrial chemicals, pesticides and other novel crops. The scientists observe that all GM crops have been approved safe for consumption on the basis of 90-day animal feeding trials. They also point out that only Roundup’s active principle, glyphosate, has been tested rather than the commercial product, which includes ingredients that enable the glyphosate to penetrate plants more efficiently.

For Full Information on this study click here: www.criigen.org

The health effects of a Roundup-tolerant genetically modiﬁed maize (from 11% in the diet), cultivated with or without Roundup, and Roundup alone (from 0.1 ppb in water), were studied 2 years in rats. In females, all treated groups died 2–3 times more than controls, and more rapidly. This difference was visible in 3 male groups fed GMOs. All results were hormone and sex dependent, and the pathological pro-ﬁles were comparable. Females developed large mammary tumors almost always more often than and before controls, the pituitary was the second most disabled organ; the sex hormonal balance was modiﬁed by GMO and Roundup treatments. In treated males, liver congestions and necrosis were 2.5–5.5 times higher. This pathology was conﬁrmed by optic and transmission electron microscopy. Marked and severe kidney nephropathies were also generally 1.3–2.3 greater. Males presented 4 times more large palpable tumors than controls which occurred up to 600 days earlier. Biochemistry data conﬁrmed very signiﬁcant kidney chronic deﬁciencies; for all treatments and both sexes, 76% of the altered parameters were kidney related. These results can be explained by the non linear endocrine-disrupting effects of Roundup, but also by the overexpression of the transgene in the GMO and its metabolic consequences.

51 Comments so far. Feel free to join this conversation.