Categorized as
4634
Tagged as
AssociationbirthconservationDurrellfuturetimetrade
Related

The team behind the White-footed tamarin conservation programme in Colombia have two big reasons to celebrate – not only has the programme been given a prestigious award but the first baby tamarins have been born to captive bred parents, illustrating the vast improvements the programme has made to conditions in the country’s zoos and some of the rescue centres that hold the species. 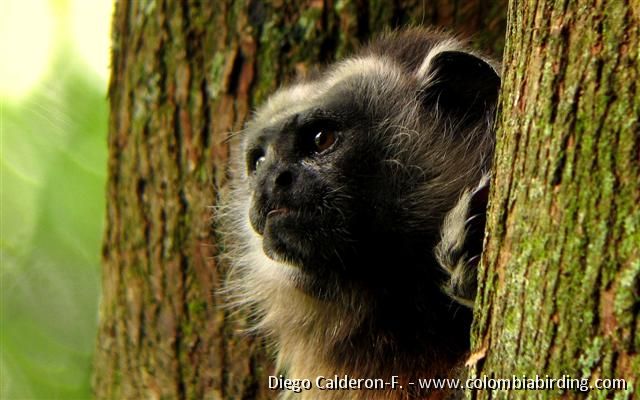 “The Silvery-brown (White-footed) Tamarin International Conservation Programme”, which is led by Durrell, Zoo Beauval and Bristol Zoo, has been declared a “Leader for the Conservation of South American Biodiversity” by ALPZA (Latin American Zoo and Aquaria Association). It is the first time the association has awarded the title.

The award reflects the huge difference the conservation programme has already made to the lives of tamarins in captivity and the impact this and other on-going work will ultimately have on the survival of the endangered endemic species.

The birth of the babies is testament to this important work. Dominic Wormell, Durrell’s Head of Mammals, said: “Before the conservation programme was set up, the mortality rate for confiscated tamarins taken to rescue centres and zoos was at a staggering 90%. They died quickly and never bred. However, through education and practical environmental changes, this mortality rate has been reduced to 20%. A total of 50 baby tamarins have been born to parents brought into captivity but this is the first time that these offspring have gone on to reproduce themselves, demonstrating that the animals are well looked after and content.”

The conservation programme is collaboration between the three European organisations, which lead it, and Colombian zoos and rescue centres. It focuses on improving captive management through teaching workshops and research; learning more about how to protect the remaining wild tamarins through field research to help develop conservation action plans; and education programmes to tackle the illegal pet trade and habitat loss, which is happening on a grand scale – about 60% of the tamarins’ potential habitat has been lost in 20 years and what remains only exists on private land and therefore is not protected.

Since the programme’s implementation six years ago, an average total of 164 participants from 20 institutions have taken part in husbandry-based workshops each year and repeat visits to zoos and rescue centres have provided further advice and progress assessments. The programme’s success includes eight zoos joining, 19 breeding cages being built, the successful birth of the 50 infants and the first babies from captive bred parents.

Mr Wormell, who was in Colombia last year to take part in the workshops and assess the progress of the conservation programme, said: “Six years ago, there was a series of disparate captive efforts in Colombia and institutions facing problems in isolation. Combined with the habitat lost and illegal pet trade, it was the perfect recipe for the extinction of the tamarins. By implementing our conservation programme we have a focused group that is able to work specifically on the problems facing the species in the wild and in captivity, where we now have healthy animals, enriched environments and thriving youngsters.”

In order to build on the award-winning work in Colombia, the conservation team will continue to work with the zoos and rescue centres, as well as carrying out essential fieldwork to establish the density of the various wild populations and a health assessment of the remaining animals. This will provide vital information for the future establishment of any reserve for the tamarins.

The birth of the baby tamarins to captive bred parents also potentially opens the door for some of the species to be brought to Durrell’s headquarters in Jersey. At present, Colombia’s strict laws do not allow any tamarins to leave the country until a second generation has been born in captivity but this has now been achieved. If some of the monkeys were brought to Durrell, it would enable a safety net population to be bred should conservation efforts in Colombia not go well in the future and enable staff to increase their knowledge of how to manage the species.