Categorized as
4619
Tagged as
concerndestructionEndangeredService
Related

ST. PETERSBURG, Fla.— The Center for Biological Diversity filed a formal notice of intent today to sue the U.S. Fish and Wildlife Service over the agency’s failure to protect 10 Florida wildlife species under the Endangered Species Act. All the species are dependent on Florida’s freshwater and wetland habitats, degraded by a century of unbridled development. 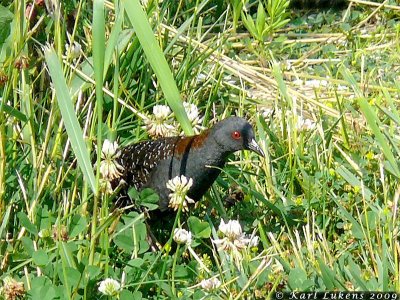 “These freshwater species are just a small sample of the fascinating, biologically important species native to Florida,” said Jaclyn Lopez, a Center attorney based in Florida. “The aquatic habitats they live in are urgently threatened by water demands and pollution, and they need Endangered Species Act protection to survive.”

The species covered by the Center’s action are the black rail, Georgia blind salamander, Palatka skipper butterfly, purple skimmer dragonfly, small-flower meadow beauty, Ichetucknee siltsnail, Florida cave amphipod and Panama City, Orlando cave and Big Blue Springs cave crayfish. In 2011, a year after the Center petitioned for their protection, the Service determined that all 10 species “may warrant” federal protection as endangered or threatened; yet it has failed to make the required 12-month findings to decide whether protection will be granted.

The 10 species share common threats: habitat destruction, water pollution and increasing water withdrawals. A number of them need the healthy cave and spring habitats dependent on the Floridan Aquifer. The aquifer, one of the most productive in the world, supplies water to several major cities, including Jacksonville, Orlando and St. Petersburg, Fla. It is subjected to intense pumping for municipal and agricultural purposes, including a new proposal to pump 13.2 million gallons per day for the Adena Springs Ranch. In addition to overpumping and drought stress, many of the water bodies the aquifer feeds are also affected by water pollution.

The black rail is a secretive, rarely encountered migratory bird that can be found throughout Florida. Because it nests in salt and freshwater marshes, water depth and quality are critical.

The Georgia blind salamander occurs not only in two Georgia counties, but in Jackson County, Fla., where it has been designated a Florida “species of special concern.” The creature spends its entire lifetime in the darkness of caves. There are fewer than 15 known populations, all threatened by water fluctuations and pollution.

The Palatka skipper is a small, brown butterfly found in the Keys. Its habitat is diminishing, and only 10 adults have been sighted since 2006.

The purple skimmer is a dragonfly that inhabits clear water lakes in northern Florida, but is now only regularly found at one lake.

The small-flower meadow beauty is a dainty, white, four-petaled flower known from the Florida panhandle. It occurs along the edges of ponds and wet areas, and is primarily threatened by habitat destruction due to hydrological and land-use alterations.

The Ichetucknee siltsnail is believed to occur in only 10 square yards of submerged mosses and cypress roots at Coffee Spring, along the west bank of the Ichetucknee River. The entirely spring-fed, crystal-clear river attracts many recreational visitors. The Ichetucknee springs are threatened by diminishing springs output brought on by drought and groundwater pumping, as well as nitrate pollution from atmospheric deposition and nearby pasture and crop lands. These threats compound its extremely limited distribution to put the siltsnail in imminent danger of extinction.

The Florida cave amphipod is found throughout northern Florida, but is severely threatened by water withdrawal and other factors. Amphipods are tiny scavenging crustaceans; population sites of this species are largely clustered in the panhandle region, where it is considered a “species of greatest conservation need.”

The Center for Biological Diversity is a national, nonprofit conservation organization with more than 375,000 members and online activists dedicated to the protection of endangered species and wild places.