Global food movement leaders and organizations representing hundreds of millions of farmers and food workers today set out their clear opposition to “gene drives” – a controversial new genetic forcing technology. Their call for a stop to this technology accompanies a new report, Forcing the Farm, that lifts the lid on how gene drives may harm food and farming systems. 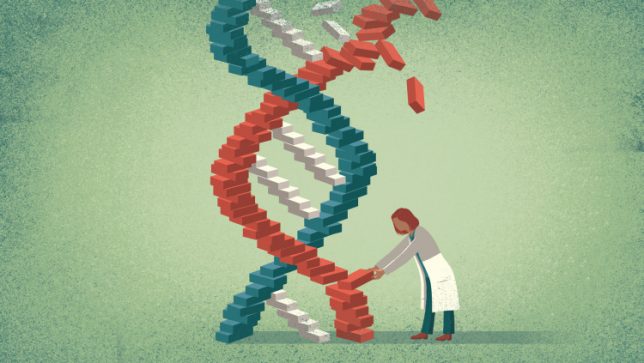 Gene drives are a genetic engineering tool that aim to force artificial genetic changes through entire populations of animals, insects and plants. Unlike previous genetically modified organisms (GMOs) these gene drive organisms (GDOs) are deliberately designed to spread genetic pollution as an agricultural strategy – for example, spreading ‘auto-extinction’ genes to wipe out agricultural pests. Agri-research bodies now developing these extinction-organisms include the California Cherry Board, the US Citrus Research Board and the private California company Agragene Inc. Next month, the United Nations Biodiversity Convention will meet to discuss measures to control this technology, including a possible moratorium.

“There is no place in a good food system for these deliberately spreading organisms,” says Mariann Bassey, chair of the African Food Sovereignty Alliance, whose 34 member organisations are among the 200+ groups and individuals who have signed the call against gene drives. “Gene drives may drive species to extinction and undermine sustainable and equitable food and agriculture,” Bassey continued.

Those launching the call for a moratorium on gene drives in food and agriculture include all past and present UN Special Rapporteurs on the Right to Food; the International Federation of Organic Agriculture Movements; IUF (the International Union representing Food and Farmworkers); and La Via Campesina, the largest network of peasant movements representing 200 million peasants in 81 countries. Signatories also include well-known commentators on food matters including seed activist Vandana Shiva, World Food Prize winner Dr Hans Herren, International President of Friends of the Earth International Karin Nansen, Activist and Food entrepreneur Nell Newman, and environmentalist and geneticist David Suzuki.

“Applying gene drives to food systems threatens to harm farmers’ rights and the rights of peasants as enshrined in international treaties,” explains Dr Olivier De Schutter, who served as the UN Rapporteur on the Right to Food from 2008-2014. “Gene drives would undermine the realization of human rights including the right to healthy, ecologically-produced and culturally appropriate food and nutrition.”

“La Via Campesina is firmly positioned against the gene drive technology. It is a threat to peasant economies, to people, countries and even the world’s food sovereignty – a technique which threatens life, biodiversity and social systems, ” said Genevieve LaLumiere, a Canadian young farmer of La Via Campesina. “This uncontrolled technology is dangerous and can contaminate our seeds, our animals and our soil; destabilize our ecosystems; and destroy our fundamental resources.” Marciano Da Silva from Brasil Peasant Organisation (also of La Via Campesina) continued, “gene drive technology is, fundamentally, a tool for patentability of native traits of our peasant seeds.”

The Forcing the Farm report, researched and produced by ETC Group and the Heinrich Böll Foundation, details several ways in which gene drive technology is being readied for application in agriculture (see box). The report exposes how gene drive developers are deliberately keeping from view agricultural applications while trying to focus public interest on high profile health and conservation projects. Reports from closed meetings with a US defence committee show that agribusiness firms such as Monsanto-Bayer and Cibus Bioscience appear to be engaging with gene drive development.

“Applying gene drives to food and agriculture turns biotech industry strategies on their head,” explains Jim Thomas, Co-Executive Director of ETC Group. “Previously GMO companies engineered the food crops. Now that consumers won’t buy GMO food, companies are coming to engineer the rest of the agricultural system instead – the weeds, the pests and the pollinators.”

“If spreading gene drives were to be released, they could pose an existential threat to organic, non-GMO and agroecological agriculture,” explains Peggy Miars, International Chair of IFOAM – Organics International, the umbrella organization for organic agriculture worldwide with close to 800 affiliates in 117 countries. “Any government who cares about protecting organic agriculture and the organic food market should move quickly to contain this threat.”