Hawaii has long been described as GMO Ground Zero, with biotech giants flocking to the paradise islands for the open air testing of their potentially dangerous new GM crops and pesticides. 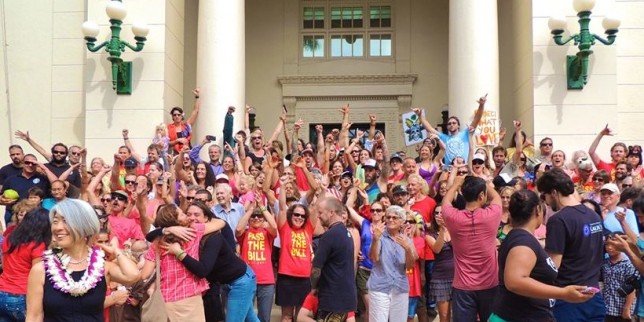 However, events over the last 2 weeks have caused Monsanto, Syngenta and friends to panic, as a groundswell of public opinion has left them on the edge of losing control of their home away from homes.

The island of Kauai delivered the first big right hook 10 days ago, when Bill 2491, ordering biotech companies to disclose pesticide use, was passed. Kauai County Council voted 5-2 to override Mayor Bernard Carvalho’s veto of the bill, leading to scenes of total jubilation amongst GMO Free supporters.

Andrea Brower, who spent several years co-directing the non-profit Malama Kauai told Sustainable Pulse that; “For the island, the passage of this bill into law means we are finally taking the first step towards getting the information we need to protect our people and land from the impacts of the agrochemical-GMO industry…Once we have full disclosure of pesticides use, along with an environmental and health impact study, it will be more clear what needs to be done to protect people’s health and the environment.”

“For these companies, making information public is dangerous and being held accountable is costly. They are not accustomed to being regulated in any meaningful way, and are afraid of the possibility of government actually working for the good of the people as opposed to facilitating corporate interests. So yes, Kauai’s pesticide disclosure law is a real concern to them because it marks an assertion of people’s rights. Testifying before the Kauai County Council, BASF’s operation manager Kirby Kester stated that the industry was against the bill because it might have the ‘ramification’ of similar laws being ‘adopted in other counties and states.’ Let’s sure hope so!” Brower concluded.

Just 3 days after the first blow to Biotech’s grip on Hawaii an amazing second slap landed on their already sore faces with the governing council for Hawaii (or Big) Island banning the companies from operating on the island while barring growth of genetically modified organisms.

The Hawaii County Council approved Bill 113 by a vote of 6-3, which would mandate a possible 30 days in jail and up to a $1,000 fine for any violator of the ban on growing genetically modified organisms (GMOs) on Big Island, officially known as Hawaii Island, the largest and southernmost of the Hawaiian state.

“The problem starts at the top and falls down on the constituents which is why this crucial push from the ground up at the County level is absolutely warranted, critical and the cleanest, most accountable form of government accessible by the affected constituents we currently have in GMO Ground Zero. We will certainly tackle the State legislature for all the Hawaiian islands and expect more attempts to strip County rights to protect citizens’ life and health as they tried last year, but we are not naive to the biotech lobby influence on key legislators and definitely need to clean House,” Carmona continued.

How many more punches can Monsanto and friends take before they leave Hawaii for good? According to GMO Free supporters they are already down for the count!