The breeding skills of three female orange-tailed skinks have impressed conservationists and given the new safety net population for their Critically Endangered reptile species a real chance for the future. 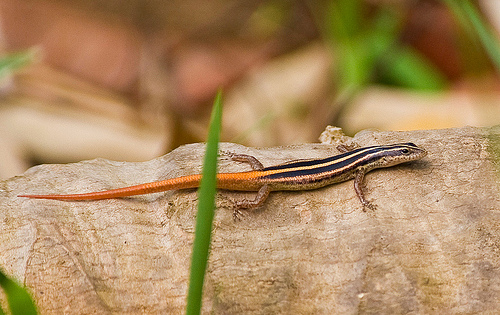 Over the past four months at the Durrell headquarters in Jersey, the females have produced a staggering 16 juveniles between them, all of which are doing well, and another 4 eggs are currently incubating.

This is despite the fact that female skinks produce only two large eggs at one time and the trio were the only females out of 22 rescued orange-tailed skinks that were brought to Durrell a year ago that were able to breed; the others were still too small or male.

Matt Goetz, Head of Durrell’s Herpetology Department, said: “These three orange-tailed skinks have gone above and beyond our expectations for them since they arrived at Durrell a year ago and started breeding in March. When they were rescued from Flat Island in Mauritius following the invasion of the predatory Indian musk shrew, we knew that a safety net population elsewhere was going to be essential as their numbers were critically low. But even in our wildest dreams, we couldn’t have hoped that the females would get off to such a flying start. They are clearly happy and healthy, and we are delighted that population numbers of the orange-tailed skink in Jersey are increasing so rapidly.”

The invasion of Flat Island by the Indian musk shrew followed the development of tourism there and sadly recent surveys have confirmed that no orange-tailed skinks have survived on the island.

Fortunately, fears about the extinction of the species led Durrell’s team, along with staff from the Mauritian Wildlife Foundation and the Mauritius National Parks and Conservation Service, to translocate 82 orange-tailed skinks to the Mauritian nature reserve, Gunner’s Quoin, in 2008 and a further 390 in 2010. Unlike Flat Island access by tourists and the public is prohibited.
The restoration of Mauritian endemic reptile communities is one of Durrell’s core conservation projects and in an attempt to establish a safety net population, 22 of the rescued skinks made their way to Jersey in June 2011.

Dr. Nik Cole, Durrell’s team leader in the Mauritian reptile project said: “Aside from the population at Durrell, the only surviving orange-tailed skinks are present on Gunner’s Quoin and it will be years before we know whether the translocation there has been a success or we manage to find a way to tackle the shrew problem. That is what makes the safety net population of this Critically Endangered reptile so important and in turn what makes the news about the breeding trio of females such a delight.”

The first of the females’ eggs were laid after conservationists created the onset of an artificial wet and hot season in the skinks’ new habitat in March. Having produced four clutches each, the females will now rest and the artificial climate will cool down. Towards the end of the year, the Durrell team will initiate another hot, rainy season and by then the remaining skinks will have reached maturity and should start breeding as well.