Categorized as
4389
Tagged as
breedingDNAEuropefarmersFDAproductiontarget
Related

Cattle are being genetically engineered using gene-editing tools to not grow horns. But according to newly published research by experts at the US Food and Drug Administration (FDA), gene-editing errors in the genome of these cattle are often being overlooked, GM Watch recently reported. 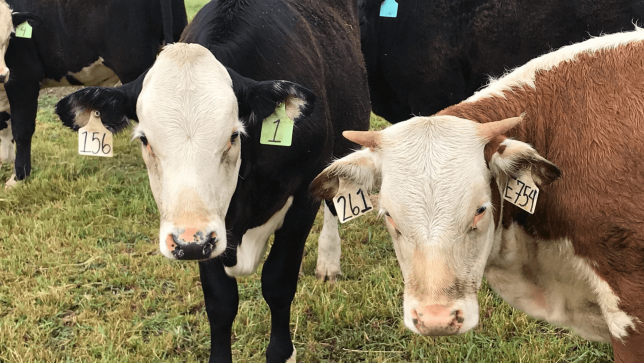 The animals were genetically engineered by the biotech company Recombinetics. The company also filed a patent on the genetically engineered cattle. The cattle have for some years been hyped as a positive application of new genetic engineering techniques and a boon for animal welfare, since these GM cattle will not need to be de-horned. However, it appears to have so far gone unnoticed that the gene-editing has resulted in major unintended outcomes.

The gene editing scissors (nucleases) used in this case are known as TALENs, a method frequently described as highly precise, and indeed, no off-target genetic changes were detected by the developers of these hornless cattle at Recombinetics.

However, the FDA research shows major unintended effects at one of the two intended target sites. The desired “POLLED” gene variant was correctly inserted into the two intended genome sites. But there was an unintended additional change: two copies of the entire DNA construction (plasmid) that carried the POLLED sequence were also integrated into one of the two target sites. Within these unintended integrations of the plasmids, the researchers found complete gene sequences that confer resistance to three different antibiotics.

It is crucial to recognise that both the intended insertion of the POLLED gene variants and unintended integrations of the plasmids into the cattle genome occur after the TALEN has completed its task of cutting the DNA at the intended editing sites. These desired and undesired DNA insertion events take place via the cell’s innate DNA repair processes, which are activated once the TALEN gene-editing tool has cut and thus damaged the DNA.

Therefore no matter how “precise” the initial gene-editing event is in terms of location, undesirable outcomes can occur at the intended site stemming from the DNA repair processes that follow the cutting of the DNA by the editing tool.

The findings described in the paper by the US FDA scientists are yet another illustration that looking only for off-target effects from a gene-editing procedure is not enough to identify the full spectrum of undesirable outcomes, which can occur even at the intended gene-editing site.

No research has been carried out on the possible consequences for animal health, or whether these additional genes are biologically active.

As the experts from the FDA point out, the errors caused by the genetic engineering technique are unlikely to be isolated cases. They suspect that such errors are “under reported or overlooked”.

The FDA scientists highlight several reasons why Recombinetics failed to detect these errors in its screening methods and recommend procedures that should be followed in future in order to provide a more accurate picture.

GMWatch concludes that Recombinetics made assumptions as to outcomes from the POLLED genome editing and in so doing, their analytical procedures were inadequate to detect the unintended on-target effects – in this case, the integration of the POLLED template plasmid DNA molecule. This elementary mistake has evidently come back to haunt them.

Given that the the POLLED gene-editing event is present in every cell of the animal, the antibiotic resistance genes will also be present in every cell. If these genes are active, they will produce a body-wide antibiotic resistance which can render these medicines ineffective when used to combat pathogenic bacterial infections in the animals. This factor invalidates any claims of animal welfare benefits from producing gene-edited POLLED cattle.

The new research exposes much of the hype around gene-edited animals as false and misleading. For example, an article published by UC Davis Dept of Animal Science about the animal scientist and promoter of gene-edited animals, Alison Van Eenennaam, begins, “Gene editing — one of the newest and most promising tools of biotechnology — enables animal breeders to make beneficial genetic changes, without bringing along unwanted genetic changes.”

Yet “unwanted genetic changes” from gene editing are exactly what the FDA scientists found.

The UC Davis article goes on to claim that “gene editing has tremendous potential to boost the sustainability of livestock production, while also enhancing food-animal health and welfare”.

In truth, no one has assessed the effects of gene editing on animal welfare, but it’s easy to predict that the mess created in the genome revealed by the new research will not have beneficial effects on the animal and may create major problems.

These findings, combined with the new findings of the FDA experts, highlight the fact that off-target effects are only part of the imprecision problem with gene editing. The other part is the unexpected effects that take place at the target site that is meant to be edited. These effects are often ignored in research that looks at unintended effects of gene editing.

Questions remain over whether gene-edited polled cattle are needed at all. GMWatch has received a comment from a beef producer who wishes to remain anonymous. He said, “We can make hornless cattle without gene editing. This is a ridiculous excuse for using the technology.”

Granted, the POLLED gene is more prevalent in beef cattle than dairy cattle. The cattle that Recombinetics edited with the POLLED gene were Holstein dairy cattle. So what were the developers’ reasons for editing the genome of the cattle? The Recombinetics publication presents several justifications. These are:
* The small number of breeding sires producing commercially available POLLED semen
* The cost to the farmer and pain to the animal involved in de-horning cattle, with the latter causing animal advocacy groups to campaign for mandatory anesthesia or a ban on de-horning
* The poor “genetic merit” of polled Holstein sires: breeding for the POLLED trait brings along with it other undesirable characteristics, such as poor milk yield
* The greater speed of gene editing vs conventional breeding in producing polled animals.

A paper co-authored by Alison Van Eenennaam repeats many of these arguments, such as the scarcity and poor genetic merit of polled dairy sires and the cost and pain involved in de-horning. In addition, the Van Eenennaam paper emphasises that breeding more polled animals from so few sires causes issues of inbreeding.

All this seems pretty convincing – until you step outside the rarified world of gene editing enthusiasts. Curiously, an article for the online magazine Progressive Dairy called “Polled Holsteins: Past, present and future” gives a totally different picture of the current situation with polled Holsteins.

The article concedes the relative scarcity of polled Holsteins – polled animals account for only 1% of the Holsteins registered with the Holstein Association. But it cites figures from the Association to the effect that “there are 12 polled bulls that are active and available with milking daughters, and there are 136 polled genomic bulls available. Of these bulls, 23 are homozygous polled, meaning that all offspring of these sires will be polled.”

That’s a rather healthier picture than that painted by Van Eenennaam and colleagues, who state, “In March 2018, only 3 Holstein and 0 Jersey active homozygous polled sires were registered with the National Association of Animal Breeders”. Different association, different figures?

“A good cow, not just a polled cow”

The Progressive Dairy article contains an interview with John Burket of Burket Falls Farm in Pennsylvania. Burket is a breeder of polled Holsteins, who has always insisted on producing “a good cow, not just a polled cow”. Burket’s main problem is not breeding good polled cattle, but the vagaries of fashion: “The enthusiasm for polled cattle run[s] hot and cold”, especially with domestic artificial insemination organizations.

Revealingly, the greatest enthusiasm for the Burket Farm genetics has come from Europe. Burket says, “They aggressively selected for the trait, and now they are years ahead of us as far as polled genetics. Animal welfare legislation in Europe based on consumer pressure will drive even further use of polled.”

So there we have it. High quality polled cattle can be easily bred, without gene editing. Animals are spared the pain of de-horning, while farmers are spared the cost. And Europe is “years” ahead of the US in the breeding of these animals, seemingly because they were quicker to recognise a useful thing when they saw it.

Recombinetics’ interests spread way beyond hornless cattle. According to Testbiotech, Recombinetics has applied for more than a dozen patents on genetically engineered animals. The large breeding corporates, Genus and Hendrix Genetics, might be amongst those profiting from the introduction of these animals onto the market. Both companies have contracted and funded the work of Recombinetics and its affiliate Acceligen. In addition to polled cattle, Recombinetics is moving to develop a gene-editing breeding method to eliminate the need to castrate pigs.

Urgent questions need to be answered regarding the safety and ethics of gene-editing techniques – including the real, as opposed to the imagined, effects on animal welfare.

We analyzed publicly available whole genome sequencing data from cattle which were germline genome-edited to introduce polledness. Our analysis discovered the unintended heterozygous integration of the plasmid and a second copy of the repair template sequence, at the target site. Our finding underscores the importance of employing screening methods suited to reliably detect the unintended integration of plasmids and multiple template copies.