New research has put to rest a theory that claimed to explain an important pathway by which the weedkiller chemical glyphosate has toxic effects on the human body, GM Watch reported recently. 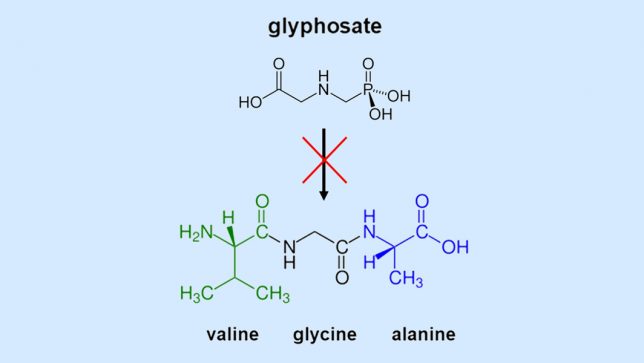 The theory has been promoted over several years by researchers who claimed that glyphosate substitutes for the amino acid glycine in the proteins that make up our body tissues, causing protein misfolding and toxicity. This hypothetical substitution was said to lead to a large array of human diseases, including diabetes, obesity, asthma, chronic obstructive pulmonary disease (COPD), hypothyroidism, Alzheimer’s, Parkinson’s, prion diseases, lupus, non-Hodgkin’s lymphoma, infertility, hypertension, osteoporosis, fatty liver disease, and chronic kidney disease.

However, no direct evidence exists for glyphosate substituting for glycine in proteins, including those in the bodies of mammals. So a group of researchers led by Dr Michael Antoniou of King’s College London decided to put the glyphosate-glycine substitution theory to the test. They treated growing breast cancer cells with glyphosate over a 6-day period. Then they extracted protein from the cells and tested it using an analytical tool called proteomics, to see if it had taken up any glyphosate. They also tested an untreated group of cells as a control.

They found that glyphosate did not substitute for glycine in the cells’ proteins. The results confirmed the findings of earlier studies in bacteria. The researchers concluded that this particular theory about how glyphosate affects humans and other mammals is incorrect.

In their published paper, the researchers commented on their findings: “Although our results will not come as a surprise to most of the scientific community, we believe they are nonetheless important in helping to clarify the debate on glyphosate toxicity in which many scientific hypotheses are considered as evidence of harm, ultimately influencing political debates, without being carefully tested in a controlled laboratory setting.”

However, Dr. Antoniou emphasises that the new research doesn’t show glyphosate is safe: “We know that there are other mechanisms for glyphosate’s toxicity, including oxidative stress, a process that can cause DNA damage that could in turn lead to cancer. And a large body of research links exposure to glyphosate and glyphosate-based herbicides with diseases such as cancer and fatty liver disease.”

Glyphosate (N-phosphonomethyl glycine) and its commercial herbicide formulations have been shown to exert toxicity via various mechanisms. It has been asserted that glyphosate substitutes for glycine in polypeptide chains leading to protein misfolding and toxicity. However, as no direct evidence exists for glycine to glyphosate substitution in proteins, including in mammalian organisms, we tested this claim by conducting a proteomics analysis of MDA-MB-231 human breast cancer cells grown in the presence of 100 mg/L glyphosate for 6 days. Protein extracts from three treated and three untreated cell cultures were analysed as one TMT-6plex labelled sample, to highlight a specific pattern (+/+/+/−/−/−) of reporter intensities for peptides bearing true glyphosate treatment induced-post translational modifications as well as allowing an investigation of the total proteome.

Comparative statistical analysis of global proteome changes between glyphosate treated and non-treated samples did not show significant differences. Crucially, filtering of data to focus analysis on peptides potentially bearing glycine for glyphosate replacement revealed that the TMT reporter intensity pattern of all candidates showed conclusively that they are all false discoveries, with none displaying the expected TMT pattern for such a substitution. Thus, the assertion that glyphosate substitutes for glycine in protein polypeptide chains is incorrect.