Feral species of cane toads in Australia could be turning even more deadly, due to their exposure to a common everyday weedkiller – Glyphosate. 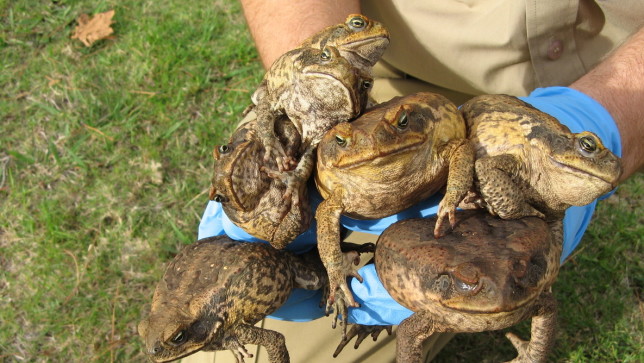 Scientists in Hungary have discovered that toad tadpoles, which have come into contact with the globally–used weedkiller Glyphogan, produce much more of the toxic chemicals used to ward off predators.

The findings, published by The Royal Society on Wednesday, are particularly relevant to Australia’s cane toad population.

Other peer-reviewed studies have also showed the damage caused by glyphosate and other pesticides to tadpoles and adult toads, including:

Scientists say they fear Australian feral cane toads could become even more toxic, due to the wide variety of habitats on offer, and the amount of pollutants and pesticides our cane toads are exposed to.

“Our results indicate that pesticide pollution might exacerbate the problem of invasive toxic species,” author of the study Veronika Bokony said.

“For example, in Australia, the survival of native tadpoles is reduced by poisoning from ingestion of toxic cane toad eggs, and predators suffer drastic mortality due to ingesting or mouthing cane toads.”

The study involves testing the effects of the glyphosate-based weedkiller Glyphogan on a vast amount of common tadpoles in a laboratory and a pond at an experiment station near Budapest.

Results showed that all of the exposed tadpoles produced significantly more amounts of bufadienolides (the toxic steroids used by as toads, snakes, and certain plants) after being exposed to Glyphogan for between nine days and three weeks.

The developments spell bad news for our native ecosystems, with scientists opining that the more toxic toads become, the more their predators may switch to other prey.

Cane toads have already had a devastating effect on native Australian animals since arriving on our shores in 1935 and spreading across the country.

The northern quoll populations were hit hardest by the toads arrival, and their poison has also taken down freshwater crocs, snakes and goannas.