A new study by experts from Ohio Northern University in the U.S. has shown that glyphosate herbicides are a main cause of the tragic phosphorus poisoning of Lake Erie, which has been causing an increase of harmful algae blooms that foul drinking water and kill fish. 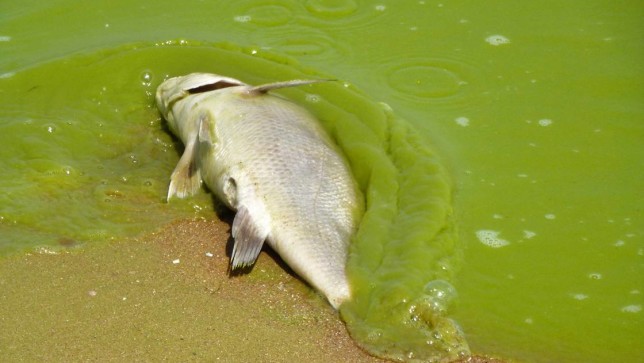 The study follows a joint agreement by the U.S. and Canadian governments earlier in 2016 to seek a 40% reduction in phosphorus runoff into sections of Lake Erie plagued by the harmful algae blooms.

Low soil pH and certain metals are causing glyphosate to release phosphorus from the soil, which is responsible for about 25% of dissolved reactive phosphorus runoff in the Maumee watershed.

Scientists now know that the increase in dissolved reactive phosphorus (DRP) runoff that’s been plaguing the western Lake Erie basin is mostly coming from farms located in the Maumee watershed.

But the question they’re still trying to answer is — why?

Christopher Spiese, a chemist at Ohio Northern University, says a combination of factors is causing the problem. But at the Conservation Tillage and Technology Conference held earlier this year in Ada, Ohio, he focused in on one specific practice that’s changed over the last few decades — the use of glyphosate.

Since then, total P in Lake Erie has decreased significantly, Spiese says. DRP loads were also coming down, but started increasing in the mid 1990s.

At that same time, glyphosate use took off with the advent of herbicide-tolerant crops. As of 2014, Spiese says, more than 95% of soybeans and over half of corn in the U.S. are Roundup Ready, and those percentages probably haven’t changed over the last 2 years.

“These crops that are able to grow in the presence of glyphosate have really kind of started to take over, to the point where we’re washed in Roundup,” he says.

So Spiese and his team at Ohio Northern University decided to see if the correlation between the increased use of glyphosate (Roundup) and increased DRP loads in Lake Erie were related.

To determine if glyphosate is a contributor to DRP runoff, Spiese says three things have to be true:

Spiese looked at the first statement and found there is a significant correlation between DRP loads and the number of acres growing herbicide-tolerant crops, counting for about 30% variability in the DRP loading.

“For every acre of Roundup Ready soybeans and corn that you plant, it works out to be about one-third of a pound of P coming down the Maumee,” he says.

Next, he looked at whether glyphosate — which contains P and has a similar chemical structure to phosphate — can release P from the soil. He clarifies he was looking at desorption of P, not whether the P in the glyphosate was contributing to the DRP loads.

Through his own and others’ research, Spiese found that depending on the types of metal in the soil, glyphosate does release P. For example, when glyphosate is applied to soil containing iron oxide-hydroxide, P is immediately released. But almost nothing is removed when it’s an iron oxide material.

Finally, Spiese took soil samples all over the Maumee watershed, applied P to them and then sprayed glyphosate to see how much P was released vs. soil that wasn’t sprayed with glyphosate after 24 hours. He saw desorption occurred all over the watershed, but certain areas were higher than others, specifically in the southeastern corner.

Based on the average two glyphosate applications growers make every year, Spiese estimates that overall, 20-25% of the DRP runoff is caused by glyphosate. But depending on the location within the watershed, that percentage could be much lower or much greater.

Spiese and his team are now trying to determine why the southeastern corner and other ‘hot spots’ are seeing P detach from the soil because of glyphosate.

Soil pH appears to be one component. Spiese says the pH levels in the Maumee watershed ranged from about 5.5-8, and they found as the pH increased, less P was released.

A higher presence of iron and calcium were also leading factors, and soil P test levels also appear to have an influence, Spiese says.

It’s not been determined yet, but no-till may play a role in this situation.

“We know that the longer a field is in no-till, the more you can mobilize some of the metals,” Spiese says. “We’re still kind of feeling our way along with that to figure out, is that going to increase or decrease our desorption ratio?”

Another consideration is the residue that’s left on the soil surface that may have glyphosate still attached to it. Spiese says he recently read about a study out of France that looked at glyphosate applied to the top of plants vs. bare soil.

“That appears to do a couple of things,” he says. “No. 1, after the farmer harvests, with no-till you leave the residue in place. That’s effectively a second application of glyphosate. Anything that’s stuck to the plant leaves doesn’t get incorporated with the soil, and that does things like prevent mineralization of the glyphosate.”

That means the half-life of glyphosate goes up significantly, Spiese says. But that may not make a difference, depending on the no-tiller’s soils.

“If your soil is one of those where you’ve got a relatively basic pH, relatively metal poor, I don’t think it’s going to make one difference if you spray glyphosate or not,” he says. “If you’re in an acidic soil with a lot of iron, I would be hesitant to tell you to spray glyphosate, just because of the risk. It’s a very geographic problem.”

The one thing no-tillers should take away from all of this, Spiese says, is to keep an open mind about possible changes scientists recommend based on these findings and future research.

He adds that some of the best advice he heard came from USDA-Agricultural Research Service ag engineer Kevin King, who recommends growers experiment with P and glyphosate applications on their farm.

“Skip laying down P for a couple rows and see what happens to your yields,” Spiese says. “Stop spraying glyphosate. Change your cover crop. There are a lot of different things that can be done. It’s just a matter of taking a little bit of risk and seeing what happens.”