Answering the call for greater transparency and choices in the food system, California State Senator Noreen Evans (D – Santa Rosa) introduced a new bill on Friday to label genetically engineered (GE, genetically modified, or GMO) foods sold in California. The bill is sponsored by a broad-based coalition of 16 environmental, consumer, food groups and small businesses called Californians for GE Food Labeling representing over a half million Californians. The bill is expected to face opposition from pesticide corporations and industrial food manufacturers. 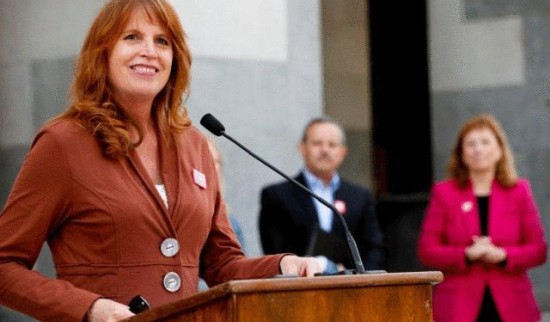 “Californians agree — we want the choice about the food we put on our dinner tables. We want a choice about the legacy we leave the Golden State’s children,” said Debbie Friedman, a co-chair of Moms Advocating Sustainability, one of the coalition groups. “Labeling genetically engineered foods gives us the opportunity to make informed decisions about our food, from farm to fork.”

Polls consistently show that over 90% of Americans and a high majority of Californians want meaningful labels that clearly identify GE foods. Since Proposition 37 — a 2012 measure that would have labeled GE foods — was narrowly defeated in California, dozens of other states have introduced similar initiatives and bills in state legislatures. Two states, Connecticut and Maine, have already passed GMO labeling bills. In Vermont, a GMO labeling bill just passed through the state’s Agricultural Committee, and voters in Oregon will likely vote on a similar initiative this fall.

Business leaders such as Whole Foods and Chipotle have also stepped up in the wake of Proposition 37, committing to label GE foods sold in their stores.

“This is an inevitable wave of change,” said Grant Lundberg, a third generation rice farmer, CEO of Lundberg Family Farms and former co-chair of the Proposition 37 initiative campaign. “The effort has come full circle to California. The new straightforward bill is an even simpler, clearer version of Proposition 37. It would simply require food sold in California grocery stores to be labeled if it contains genetically engineered ingredients.”

The bill introduced by Senator Evans earlier today — SB 1381 — will be referred to committee in the coming weeks. It is likely to face opposition from a set of powerful interest groups, including biotech and pesticide giant Monsanto, that attempted to confuse voters with a sophisticated $47 million public relations campaign in 2012.

“Labeling food is a clear and affordable way to give Californians choice,” said Mark Squire, owner and manager of the grocery store Good Earth Natural Foods. “Food manufacturers regularly update their labels, including nutrition information, and this is one more simple update they can make.”

Despite widespread public support for labeling, the federal government has failed to enact labeling. Meanwhile, over 60 nations across the globe already label GE foods, setting the United States and California — the world’s 12th largest economy — apart. Proponents are calling on California’s legislators to provide leadership on labeling and informed choices for the families of our state.

“Pesticide and junk food corporations are already taking the effort to Washington, DC, trying to make it illegal for states like California to pass their own labeling laws,” said Kristin Urquiza, co-coordinator of Californians for GE Food Labeling. “California leaders have an opportunity to cut through the misinformation and give shoppers the right to choose what kind of food and food system they want.”

Due to the intensity of the public relations campaign against Proposition 37 and GE labeling initiatives in other states, proponents of the new bill are removing any room for confusion. The new bill further clarifies the proposed law, explicitly protects farmers and places limits on potential litigation.

This isn’t the first time California legislators have taken steps to protect the state’s agricultural and food interests. They passed AB541 (Huffman) in 2008, to provide safeguards for farmers whose crops are contaminated by genetically engineered material.