More than 400 farmers coming from all over Bicol stormed the ongoing field testing of Golden Rice at the Department of Agriculture Regional Field Unit No. 5 at Pili, Camarines Sur. 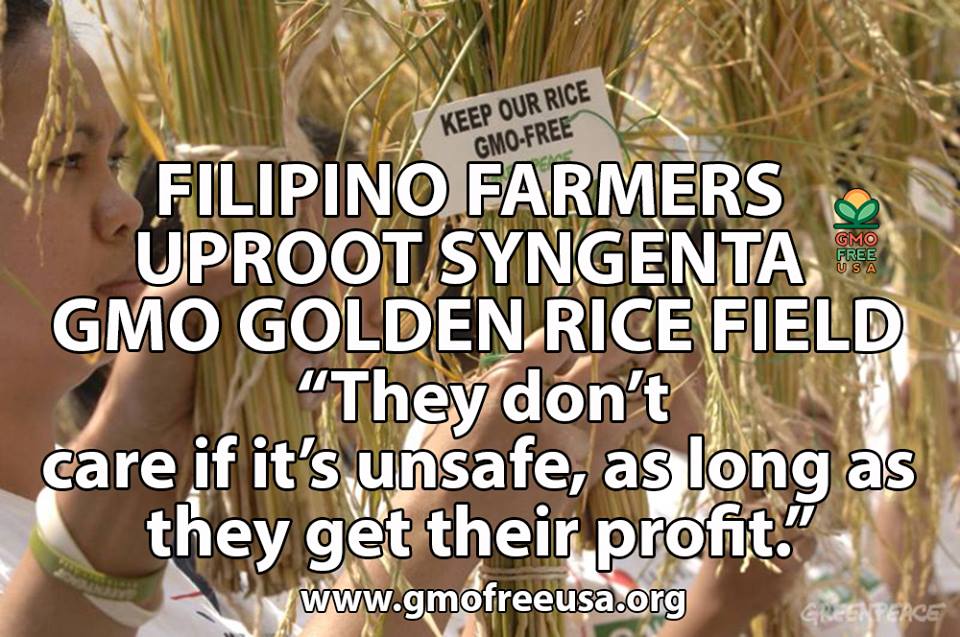 Farmers uprooted the genetically modified rice in order to stop the planned commercialization of Golden Rice.

“The farmers have decided to take action against the ongoing Golden Rice field trials. Golden Rice is not an answer to the country’s problem on hunger and malnutrition” said Bert Autor , a farmer and spokesperson of SIKWAL-GMO. SIKWAL-GMO is an alliance farmers, church people, students, academecians and consumers based in Bicol who are against GMOs and Agrochemical Transnational Corporations’ control on agriculture.

Golden Rice is genetically modified with genes coming from bacteria and corn to produce beta carotene. Proponents said that Golden Rice will be used to address Vitamin A Deficiency or VAD. The project is being undertaken by the Philippine Rice Research Institute (Philrice) with field trials being conducted in Ilocos Norte, Isabela, Nueva Ecija and Camarines Sur. Cases of VAD, however, is already declining in the country according to data coming from DOST-FNRI.

Autor stressed that the Agrochemical TNCs and the US are behind the push for the adoption of Golden Rice and other GMOs. US product exports to the Philippines which are derived from modern agricultural technology increased more than 265 percent from $142 Million in 2003 to $527 Million in 2011. Soybean-based products account for most of the exported product (67 percent) followed by feeds and fodder (17 percent). In an interview, Philip Shull, agricultural counselor at the US Embassy in Manila said that the Philippines is a huge market which is growing every year and that the US government is concerned about misunderstanding GM crops and products. Golden Rice patent is owned by agrochemical giant Syngenta.

“Agrochemical TNCs, which are protected and abetted by the US government, gained millions of profit from GMOs even at the expense of the health and livelihood of Filipino farmers and consumers. They don’t care if it’s unsafe, as long as they get their profit. Such is the fate of GM corn farmers. Farmers who shifted to GM corn farming suffered the most, as the price of GM seeds and other inputs skyrocketed. The farmers are now in debt, most of them lose their land to corn traders because they are unable to pay. Once Golden Rice is commercialized, this will only lead to the privatization of our rice. Agrochemical TNCs have been waiting for this opportunity, to finally control the rice seed industry. This would mean more profit to them, as rice is the staple of Filipinos and the people of Asia” added Autor.

The farmers quickly went to the field trial site, uprooted the GM rice and buried it inside the field trial. Autor said that the field trials would only put the Filipino’s health and the environment at risk. Golden Rice field trials also puts our traditional and native rice varieties at risk of contamination.

Autor further said that “last February, we had a dialogue with officials from DA RFU5. After airing our concerns, they promised us that they will not conduct any Golden Rice field trials. However, they still continued these clandestine  field trials. We are very concerned as news about feed testing will start this year and that the harvest will be used in these feed experiments. In China, the people have protested against the feed trials on children, prompting the proponents to compensate the affected families. We do not want our people, especially our children to be used in these experiments.”

Last May, the Court of Appeals ruled against the field testing of another GMO, the Bt (Bacillus thurngiensis) eggplant, saying that the field trial violates the basic constitutional right of Filipinos to health and a balanced and healthy ecology. Bt eggplant is genetically modified to produce toxins against the fruit and shoot borer. The Court of Appeals stated that there is no full scientific evidence that will ascertain the safety of the product, and that there is no single law that governs the study, introduction and use of GMOs. The court  ordered the permanent cease of Bt talong field trials and the protection, rehabilitation and restoration of the environment.

“This should serve as a stern warning to those planning to conduct GM field trials in Bicol. What we need is a comprehensive and long term solution to address hunger and malnutrition. Golden Rice, and GMOs in general will only aggravate the already dire condition of the small and resource-poor farmers . We call on the Department of Agriculture to immediately cancel Golden Rice and other GMO field testing in the country. We do not want Golden Rice!” asserted Autor.