After several years of apparent short term success in Burkina Faso of Bt cotton in increasing yields, and improving profits of small scale cotton farmers, authorities in Ghana have decided to go down the same road. Ghana’s National Biosafety Committee (NBC) has just approved field tests of GE rice in the Ashanti Region, and GE cotton field tests at 6 different locations in the Northern Region. Bt is bacillus thuringiensis, a pesticide used to control bollworms in cotton, and stem borers in rice. 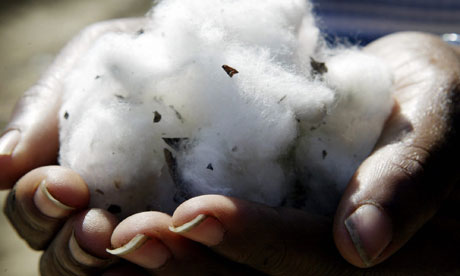 Why is Ghana looking only to the short term gains of Burkina? Why not also look at the much longer term experience of Bt cotton in India, China, the USA, and Indonesia? In all of these countries, there is evidence of huge problems arising from Bt crops after the first few years. There is an alarming record of growing dependency on agribusiness corporations, reduced profits, increasing debt of small scale farmers, and major environmental safety hazards. Is Ghana naively following bad advice from agribusiness corporations and their NGO and diplomatic agents?

Currently, West Africa has the enviable record of producing some of the best cotton in the world with the least use of pesticides and without genetic engineering. Introducing Bt cotton will put this at risk. Cotton and rice farmers in Ghana can easily recount the constraints limiting their production and profits. But none of these priority problems can be solved by introducing highly controversial GE hybrid seeds.

Potential demand by farmers is not driving this recent action by the Biosafety Committee. There is another, quite hidden, agenda pushing Ghana down the GE road. The so-called success of Bt cotton in Burkina is only being used as a pretext for this agenda.

The start of field trials for Bt crops in Ghana is highly alarming because there is no scientific evidence supporting the long term safety of genetically engineered (GE) crops. “Closed” field trials on research stations are no guarantee of preventing Bt contamination when wind and birds spread pollen laced with insecticide genes. What seems likely as a major factor pushing this highly risky venture is that the Biosafety Committee has been influenced by outside forces.

The risks Ghana is taking by starting down the GE road are many. Bt cotton and Bt rice have the pesticide Bt in every cell of the plant, including the pollen. There is some evidence suggesting that inhaling Bt pollen can sicken people and livestock, and in some cases even cause death, as happened in Mindanao in the Philippines. There are reports that thousands of sheep in India were killed after grazing on the fields of Bt cotton after harvest. And in both Germany and India, cows eating Bt crops have died. Bt infected pollen can drift far and wide, pollinating normal crops, contaminating them with the Bt altered genes. Transgenic proteins, the proteins transferred from one species to another by GE technology, can potentially cause serious immune reactions including allergies. This is a serious public health issue; and warrants an immediate ban on GM crops, including field trials, until proper assessment on the immune potential of all the transgenic proteins has been carried out.

Bt cotton also has a devastating effect on the soil, because the insecticide gene destroys vital microbial organisms, bacteria, and enzymes. A decade of planting with GM cotton, or any GM crop with Bt genes in it, could lead to total destruction of soil organisms, leaving dead soil unable to produce food. Bt enters our soil, our air, and our water.

It is highly unfortunate that key scientists involved do not seem concerned by these issues. Dr. Emmanuel Chamba, Plant Breeder and Principal Investigator for Bt Cotton research at the CSIR-Savanna Agric. Research Institute (SARI), Nyankpala, Tamale, seems preoccupied only by finding ways to control cotton’s two main insect pests, Bollworm complex and Sucking pests. And these, he indicated can be well taken care of by the Bt cotton.

But even on this narrow basis, the record of other countries is a savage contradiction to his words. Burkina Faso’s example only shows that the first few years of Bt cotton crops may be a success. But longer term experience in India, China and the US provide strong evidence that the insects soon develop resistance. Also, secondary pests, that before caused little or no damage, soon become major problems. The agrochemical companies then genetically engineer plants with stronger toxins. After the first few years the cotton farmers find they have to treat their fields more frequently with more and stronger chemicals. They enter a cycle of more expensive seeds, more pesticides, and more debt. They are required by contract to buy new seed each year along with the accompanying chemical fertilizers and pesticides. In the US and India this has led to a cycle of debt in which the agrochemical company eventually seizes the farmer’s land to pay the debt, leaving the farmer with nothing.

These are the grave risks that the Biosafety Committee decision is bringing to Ghana. Are the potential short term benefits of Bt crops worth these multiple risks? What are the lessons we need to learn from what happened in other countries? Even leaving aside the biosafety hazards, and regarding only production, in India, there is a striking correlation in the areas where Bt cotton is widely grown, and a dramatic increase in the rate of farmer suicides, many thousands per month. In most cases the farmers committing suicide have lost their farms due to a cycle of debt they incurred to buy new seed and pesticides, and negative income due to crop failures. Many attribute the huge price increase of cotton seed, which has gone up 8000% in India since Bt seed was introduced, as a contributing factor to farmer suicides.

In many countries, Bt cotton has proven subject to other crop diseases, particularly virus wilt. Farmers in the US and China have found whole fields wilting and when they pull up the plant there are almost no roots. Nothing can be done but destroy the entire field. Even in Burkina Faso, touted as a success story, farmers have been unhappy with the short fibers produced by Bt cotton. Most West African cotton has the highly desirable long fibers. In 2012 there was talk of stopping Bt cotton production completely in Burkina Faso. For now there are reports of a resort to the use of traditional seeds again, and a sharp decline from 70% to 40% of the land surface previously occupied by Bt cotton. So much for the so-called Burkina success story!

Dr. Margaret Ottah Atikpo, of the CSIR Crop Research Institute, stated that if the trials being conducted for genetically modified rice at Fumesua proves successful it will enable Ghana to grow rice that is nitrogen and water efficient as well as salt tolerant. “So that where the soils are poor, it doesn’t matter, it is supposed to thrive. You can grow it where you don’t have swamps and even where there is salt in the soil you can grow it,” she stressed.

However, Bt rice is supposed to help kill insect pests. But in Ghana, insect damage in rice is not a major problem faced by rice farmers. Moreover, Bt rice has nothing to do with what Dr Atikpo is saying about drought tolerance, and nitrogen efficiency. She is reciting the mantra the GE interests have promoted for over 20 years. But there is not yet any widespread example of success of GE crops being more drought resistant, much less significant increases in nitrogen efficiency.

To the contrary, all evidence to date indicates that GE crops need to be coddled with the special chemicals the agrochemical companies have designed for them. Most need more water rather than less. And most need steady and reliable irrigation and are unable to depend on rainwater. They are less likely to tolerate floods or drought, or secondary pests and diseases, than conventional varieties.

GE crops engineered with Bt are seldom used to feed people. They are mostly used for animal feed at present. A recent Australian study shows pigs fed a Bt corn and soy diet have inflamed stomachs and the females have enlarged uteruses. Rats fed GE corn over their lifespan develop enormous tumors. Do Ghanaians want to be human guinea pigs for Bt crops in humans?

Dr. Stephen Amoah, a research scientist at CSIR, Kumasi, says Ghana’s agricultural production is beset with a myriad of constraints. “These include declining soil fertility, pests, diseases, low yields of crops, drought, floods, post-harvest losses among others” He neglects to mention that over time all of these become greater problems with GE crops. Even though Ghana has increased food production in recent years, this has been by expanding land under cultivation. He worries about inadequate land to feed Ghana’s people.

There are many proven techniques that multiply productivity on very small areas of land, as the recent trend in urban agriculture, and work with agroecology science and farming systems research is demonstrating. These have nothing to do with genetic engineering. Seeds alone do not determine crop productivity. They are a contributing factor, but there are many more factors involved. This is why it is highly beneficial to ensure farmers have access to many varieties of seed, and grow a diversity of crops.

Farmers’ choice among the most appropriate varieties of seed is something the genetic engineers are trying to stamp out with their patented seeds and exclusive contracts. The giant agrochemical companies promoting their GMO varieties in Ghana are using their influence, and money, to divert Ghanaian scientists and politicians away from much more relevant approaches to agricultural science and food security, in their pursuit of profits.

The priority need of Ghanaian farmers is not GE seeds. The only people who need genetically engineered crops are the foreign agrochemical companies and their stockholders who profit from the monopoly sales of these products, with no regard for the human misery and bio-contamination they will cause.