Close on the heels of transnational seed company Monsanto abandoning its programme for development of genetically modified (GM) crops in Europe last month, there are growing calls for the company to do the same in India. 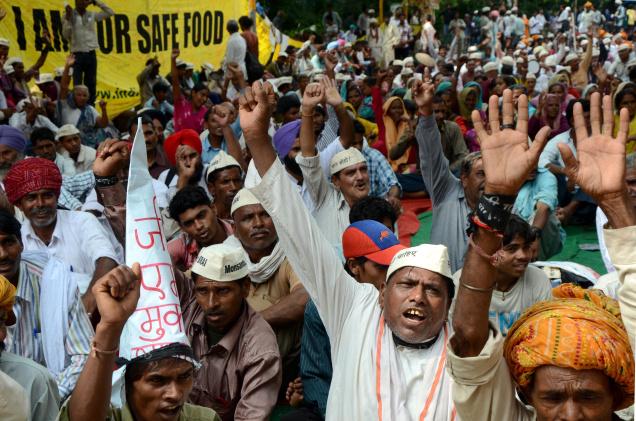 Its decision to withdraw all applications to grow GMO crops in Europe came in the face of strong opposition to the technology that was hurting its commercial interests.

“Monsanto, Quit India” and “Centre, reject Biotechnology Regulatory Authority Bill” were the demands raised by thousands of farmers and activists from across 20 States at a demonstration here on the eve of “Quit India” movement.

If the Congress respected Mahatma Gandhi, it would ask Monsanto to quit India, D. Raja of the CPI told the gathering.

A delegation of farmers and activists of the Coalition for GM-Free India, who could not get to meet Prime Minister Manmohan Singh, presented Minister of State in the PMO V. Narayanasamy a national flag made up of non-GM cotton for Dr. Singh to unfurl at the Red Fort on Independence Day.

“Cotton and the cloth made from indigenous cotton are a symbol of our freedom struggle,” said Kavita Kuruganti of Alliance for Sustainable and Holistic Agriculture. “Today, 93 per cent of the country’s cotton seed is controlled by Monsanto. It is now in the hands of the Prime Minister to protect our seed sovereignty as well as our food, farms and freedom.”

A report of the Supreme Court-appointed Technical Experts Committee on GMOs recently recommended that there should not be any field trials of GM crops until gaps in the regulatory system are addressed. The panel suggested early risk assessment and emphasised need for chronic and trans-generational toxicity testing of GM products on humans, livestock, environment and biodiversity.

Minister for Environment and Forests Jayanthi Natarajan, too, has expressed concern at field-testing of GM crops and has put on hold approvals given by the regulatory authority under her Ministry in view of a public interest litigation petition in the Supreme Court.

Cutting across party lines, Members of Parliament joined the sit-in to express their solidarity with the coalition of about 250 civil society and farmers groups. BJP’s Murli Manohar Joshi and Dharmendar Pradhan (members of the Agriculture Standing Committee); DMK MPs, including T.K.S. Elangovan, T.M. Selvaganapathi, K.P. Ramalingam, A.K.S. Vijayan and S. Thangavelu; and MDMK’s A. Ganesamurthi expressed their support and assured farmers that they would take up the issue in Parliament.

Chairman of the Standing Committee on Agriculture and CPI(M) leader Basudeb Acharia said the panel had recommended that the BRAI Bill that provided for single-window clearance to GM technology should not be tabled in Parliament. The panel had opposed field trials of GM crops until a strong, revamped, multidisciplinary regulatory system was in place. M.B. Rajesh of the CPI(M) said the party backed the protestors’ demands.