GM Crops are a threat to our dwindling water supplies; they are less water-efficient and contaminate fresh water. 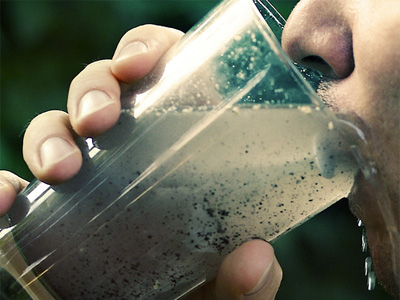 A fully referenced and illustrated version of this article is posted on ISIS members website and is otherwise available for download here.

Genetically Modified (GM) crops are widely recognised for their potential to damage both human health and the environment. Evidence is now accumulating of the contamination of streams, rivers, rain, as well as groundwater with GM-associated chemicals including Monsanto’s glyphosate-based herbicide, while genetic elements such as antibiotic resistant genes are emerging in water-borne microbes. Further, GM crops have been shown to be less water efficient, corroborating farmer’s reports of failing GM crops during droughts. Industrial farming in general has been shown to be ill-adapted to extreme weather events such as hurricanes as well as droughts; and GM crops are not expected to do any better.

Glyphosate, the active ingredient of Monsanto’s Roundup herbicide, is one of the most commonly used herbicides in the world, owing to the widespread planting of glyphosate-tolerant (GT) crops. It has been associated with a host of human and livestock health issues including birth defects, reproductive problems, carcinogenicity, endocrine disruption, neurotoxicity and internal organ toxicity, as well as lethality to frogs and  harm to soil and aquatic ecosystems (see [5] Why Glyphosate Should be Banned, SiS 56). With all this in mind, the contamination of water supplies with glyphosate, a highly water soluble herbicide, has wide-ranging implications.

Groundwater has recently been shown to be contaminated with glyphosate. Groundwater is water located under the Earth’s surface and supplies wells, aquifers and streams and makes up approximately 70 % of the world’s fresh water supply. As rivers and lakes tend to be supported by groundwater, much of the water we use for agriculture, industry and drinking water is either groundwater or has been groundwater at some point in the water cycle. An important study published in 2011 found that of 140 groundwater samples taken from Catalonia, Spain, 41 % of them had glyphosate levels above the limit of detection [6]; contrary to the claim by Monsanto that the herbicide biodegrades rapidly in the environment. Moreover, the highest detected level reached 2.5 mg/L, which is above the already controversially high 0.1mg/L and 0.7mg/L drinking water limits in place in the EU and US respectively.  Catalonia is a region that does not even grow glyphosate-tolerant GM crops that have been directly linked to increased glyphosate use in the US (see [7] GM Crops Increase Pesticide Use, SiS 56).

Thorough studies of groundwater contamination in abundant GT crop growing areas are unfortunately lacking. Smaller regional studies in the US and Canada however show widespread contamination of rivers, streams and atmospheric deposition. Two studies were conducted by The US Geological Survey in 2002, the first tested 51 streams in nine Midwestern states, during three runoff events: after the application of pre-emergence herbicides, after the application of post-emergence herbicides, and during harvest season. Glyphosate was detected at or above 0.1 mg/L in 35 % of pre-emergence, 40 % of post-emergence, and 31 % of harvest season samples, with a maximum concentration of 8.7 mg/L [8]. The second study found that over a third of streams in the Midwest US state of Kansas, over a third of 53 streams were contaminated with glyphosate, while two-thirds were contaminated with a glyphosate metabolite AMPA (2-amino-3-(3-hydroxy-5-methyl-isoxazol-4-yl)propanoic acid) [9]. A study of urban streams in King County, Washington, US found all tested streams had glyphosate [10]. Also documented was glyphosate contamination in 60-100% of air and rain samples tested; suggesting that glyphosate exposure is omnipresent in the US [11]. The concentrations detected ranged from <0.1 to 2.5µg/L in air and rain samples, respectively.

Similar results were obtained in Canada; a study in Alberta found that atmospheric water deposited glyphosate at <0.001 to 1.51 μg/m2/day, while samples from surface water (3 wetlands and 1o streams) had up to 6.079μg/L, which was likely to be lower than normal due to severe drought in 2002 when the samples were collected. The study also highlighted the transport and persistence of glyphosate in soil sediments [12]. Glyphosate use has increased widely since 2002 when these studies were conducted.

There are no legal standards in place anywhere in the world on safe levels of Bt toxins in drinking water, although the US EPA acknowledges that humans may well be exposed to the toxin via food or drinking water [13]. They conclude that as Bt toxins pose no health problems to humans, ingestion of the toxin is therefore of no concern. However, our review of the literature showed otherwise [14] Bt Crop Hazards and Failures (SiS 53). Bt toxins are implicated human health complications including allergenicity and other immune reactions, skin and eye problems, as well as internal organ toxicity in feeding trials on animals and in vitro studies of toxicity and lethality to human kidney cells at low doses (see [15] Bt Toxin Kills Human Kidney Cells, SiS 52). Environmental concerns include effects on soil microorganisms and off-target beneficial insects such as bees, caddis flies and Daphnia magna (see[16] Bt Toxin  Threatens Aquatic Ecosystems, SiS 36).

Analysis of the streams and water columns in Midwestern US, where an estimated 91 % of streams are located within 500 meters of maize fields, found that 23 % of water column sites and 13 % of stream sites had detectable levels of the Bt Cry1Ab protein 6 months after harvest. Furthermore, 86 % of stream sites contained Bt maize detritus (organic matter from the plants) [17]. A similar study conducted in Canada found cry1Ab DNA as far away as 82 kilometers from the nearest Bt maize field, suggesting that it travels long distances through the water column [18].  Looking at the presence of the cry1Ab DNA, they found it persisted for 21 and 40 days in surface water and sediment, respectively. Sediment-associated cry1Ab gene from Bt maize tended to decrease with distance from the Bt maize field.  The ability of DNA to bind to clay substances increases its half-life and thus, as the authors of the study state, increases the risk of horizontal gene transfer (see [19] Horizontal Gene Transfer from GMOs Does Happen,SiS 38). Horizontal gene transfer and recombination is the main route for generating new pathogens and spreading antibiotic and drug resistance, and genetic engineering is nothing if not greatly facilitated horizontal gene transfer and recombination. Persistence of Bt toxin DNA in our water systems is therefore a real concern.

Antibiotic resistance is becoming a real threat to the therapeutic use antiobiotics. Contributing to this problem is the common inclusion of antibiotic resistance genes in DNA constructs destined for GM organisms. A study conducted in China now shows widespread contamination of 6 out of 6 urban rivers with bacteria carrying a synthetic version of the blá antibiotic resistance gene [20] (see [21] GM Antibiotic Resistance in China’s Rivers, SiS 57). The blá gene confers resistance to the most common class of antibiotics called β-lactams, which include penicillin derivatives (penams), cephalosporins (cephems), monobactams, and carbapenems. Sequencing of the bacterial DNA revealed that the sequence was derived from the lab as it does not exist naturally, confirming it as a contaminant from human activities. The rivers sampled are in highly industrial areas and, the Pearl River in particular, has previously been reported to be the most polluted with antibiotics. Though authors do not speculate on which particular industry is responsible for the pollution, it is clear that synthetic plasmid vectors are a source of antibiotic resistance. Contamination from GM crop cultivation is indeed entirely possible. The majority of GM crops already released commercially or field trialled in the open environment carry antibiotic resistant genes derived from the synthetic plasmids that were used for genetic modification. China both grows and imports GM foods and trees, many of which harbour the blá gene including: Syngenta’s Bt11 Yieldgard Maize and Bt176 NaturGard Knockout Maize, Monsanto’s Mon21 Roundup Ready Maize and Bayer’s ZM003 Liberty Link Maize. China has also been developing many GM crops, including rice. Bt ‘Shanyou’63, was already the subject of controversy since 2005; the unapproved variety (both in China and other countries) illegally sold and planted in Hubei province, contaminated Chinese rice products exported to Europe and Japan, and has been detected in China and various countries since then. Bt63 was developed in Huazhong Agriculture University in Wuhan, Hubei Province. Perhaps it is not a coincidence that the Yangtze River, one of those tested in the study, runs through the Hubei province.                 Horizontal gene transfer from genetically engineered plasmids to microbes in the soil or from lactic acid bacteria to human and animal gut microbes is a likely consequence of such pollution, and may well underlie the rise in resistance in animals as well as humans.

In 2012 the US suffered from the worst drought in 50 years. As a result, crop yields were severely affected as well as cereal food prices. The overwhelming majority of corn and soybean crops grown in the US are GM but evidence from Howard Vlieger, a farmer who grew both GM and non-GM varieties of corn and soybean showed that his GM varieties suffered more than the conventional varieties. In fact, he reported that his conventional varieties were not only surviving the drought, but flourishing (see [22] GM Crops Destroyed by US Drought but non-GM Varieties Flourish, SiS 56). For his corn crops, he harvested 100-120 and 8-50bushels/acre for non-GM crops GM respectively.

This report from the farmer can be corroborated by scientific studies that show GM GT soybean absorbs less water and requires more water than conventional varieties (see figure 1). Previous studies by the same researchers found that GT soybean had reduced lignin content as well as reduced photosynthesis rates, both of which may be contributory underlying mechanisms for reduced water efficiency and absorption.

To date, there have been no studies assessing the ability of GM crops to adapt and cope with extreme weather conditions such as hurricanes, flooding and extreme drought.

However, GM crop cultivation can be considered an extreme form of industrial agriculture, which was found in studies to suffer more damage than organic agriculture following extreme weather events. In contrast, organic fields retained more top soil, which helps to retain water during drought and minimises landslides and runoff during flooding. Organic soils were found to have increased soil microorganisms such as mycorrhizae, which help maintain soil structure and retain water. Two studies, one in Central America and the other in Japan have confirmed this, with organic crops out-yielding industrially produced crops following hurricanes [23, 24]. Independent studies directly assessing GM crops and climate change have yet to be done.

Available studies have exposed GM agriculture’s contribution to the pollution of our finite water supplies with toxic herbicides, insecticidal proteins and genetically modified DNA, including antibiotic resistance marker genes in pathogenic bacteria. GM crops are also likely contributing to the depletion of this essential resource, as they require more water to grow. Thorough national and international studies are needed to define the extent of the problem.