Sustainable Pulse Interview with the Founding Head of Occupy Monsanto, Fritz G. Kreiss, on GMOs, Monsanto and much more besides. 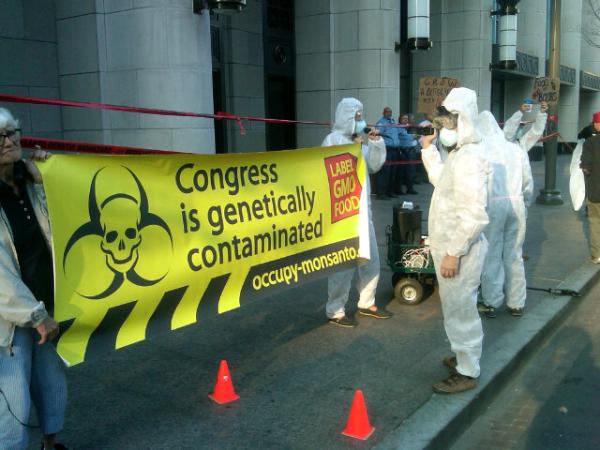 Occupy Monsanto sprung up soon after the Occupy Wall Street campaign got in to full flow. What makes these campaigns similar?

Occupy Monsanto was simply created to recognize at an opportune time to highlight the endemic problems in our food and economic situations and how they relate. That, combined with my own training in natural health and nutrition, allowed for the chance to create a movement to highlight the corruption in our food system, along with the FDA, and the USDA themselves as well as raise awareness on many health and sustainability issues that people can make differences in their own lives by choosing foods, products, and sources that both increase their own health as well as that of the environment while also helping support the small scale farmers that need our support to protect them against the industrial mega-farms that have taken over in recent years.

Prof. Gilles-Eric Seralini’s 2012 study on GM Maize and Roundup made headlines worldwide – what is Occupy Monsanto’s view on the reaction to it from the mainstream media?

I was disappointed more than anything that it was met with such criticism without proper consideration, I have not read the entire study but even in the original statements and the brief abstract it was quite clear that there was very significant evidence pointing to the probability that these GMOs and the RoundUp that goes with them are carcinogenic to at least a degree. Even to those that reject the study altogether for not meeting some personal standards of “purity” forgets to pay attention to the fact that this is the only lifetime long term study of its kind ever done on Genetically Engineered Crops, outside of course the experiment being conducted upon all of us in the arena of daily life.

What forms of protest work best regarding opposing GMOs?

It’s my philosophy that the number one focus is to create awareness and help educate the public. First off, there is the strange truth that most people are not only unaware that they are eating GMOs, a great many still don’t know that such things even exist. I myself was once a big fan of the possibilities of biotech being used for good, I still remember reading about the magical superfood tomato that would be so enriched with nutrition that it could supply 100% of all our nutritional needs. That article was printed in 1992, saying that we’d have these tomatoes by the year 2000 or so; it’s now 2013 and not one single actual improvement in our foods has been made by genetic engineering and instead we’ve been bilked into switching over to seeds created to sell more pesticides that have since failed and the industries only response is to create new versions of the same technology so that farmers need to dump even more and more harmful pesticides and herbicides on our crops.

A couple of my biggest favorites have come from the Label It Yourself campaign and the very successful concepts started up by GMO Free USA’s campaigns to boycott the companies who fought labeling in order to keep the truth about what they put in their products hidden.

The Just Label It campaign is now finding its feet in states across the US, what is Occupy Monsanto’s view on the Prop 37 vote in California and the way forward for the campaign?

I see the prop failing as nothing more than a great shame due to a massive disinformation and propaganda campaign used to lie and delude the public. I’d love to see if there were actual lawsuits that took place to make the companies and organizations that lied to the public take responsibility for their illegal and immoral actions. The way forward is already coming as the momentum is still continuing to build in the aftermath and while we don’t know for sure what state will pull it off first or which one will be the tipping point to make it national and eventually start changing regulations in Canada and other countries as well. I don’t have direct contact with the most of the people that are running the campaign to get it back on the ballot for 2014 but look forward to hearing more and I certainly wish them the best of luck.

Who are the main Monsanto supporters in the US government and how can the general public stop them from pushing all of their pro-Monsanto policies through?

That’s a very complex issue in many ways. Monsanto is so enmeshed and entwined in many aspects of our government that it is more along the lines of everything in shades of gray and while Obama himself (I think with legitimate intention behind it at the time) promised to have GMOs labeled, obviously he has not only done nothing to do so but also put together one of the most pro-Monsanto administrations of the last 20+ years since Bush Sr. first put them in power.

Does Occupy Monsanto concentrate solely on opposing Monsanto in the US, if not then which are the most important parts of the World in the fight against GMOs?

Monsanto must be “occupied” wherever they go to ensure that they cannot further harm those who can’t protect themselves from a multinational behemoth, whether small scale farmers, peasants that get trapped in bad economic situations or are harmed through the work they do on farms owned by others, or the general public that deserves a healthy and nutritious food system. The US is certainly the key as we are also the source and main home of Monsanto et al, but other particularly important battlegrounds are India where they’ve already directly caused the deaths of hundreds of thousands, Africa where they would likely put thousands of innocents in economic servitude as they did in India, and South America where they’ve had dozens of activists killed over the years and is also one of the continents most covered in pesticides and GMOs.

What is next for Occupy Monsanto and its supporters – what is the ultimate target for you?

Currently I’m considering the possibility of making it into more of a long term actual full non-profit institution for promoting sustainable food, nutrition, and health related knowledge in regards to toxins both environmental and ingested. As for more direct goals I prefer to wait “until the water clears” as Lao Tzu said so that I/we can more clearly see the truth and know how to most effectively act. Essentially, I want us to win battles and causes as they come up and help make the world a happier, healthier, and more just place to live for all of us.