Categorized as
7156
Tagged as
poacherstradeWWF
Related

Cameroon has announced that is has sent special army units to stop Northern Sudanese poachers from entering its territory to hunt elephants for their ivory, in an operation it called “a first of its kind”. 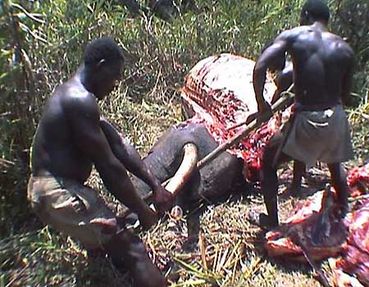 According to information obtained by WWF, this is the same group of poachers that in early 2012 travelled more than 1,000 km on horseback from northern Sudan across the Central African Republic and Chad to kill over 300 elephants in the Bouba N’Djida National Park in northern Cameroon. This information says that the group had decided to return earlier than usual this year in order to take advantage of the greater ground cover available during the rainy season and to catch the park guards by surprise by arriving sooner than expected.

On Friday, high ranking officials of the Rapid Intervention Battalion (BIR), Cameroon’s special forces, told WWF that the high command had as a priority “the conservation and valorization of biodiversity, including the fight against cross-border poaching.”

“We are committed to avoid a repeat of the elephant massacre of early 2012,” a BIR official said. “We are already on the ground, we know the poachers are coming, and we have forces deployed in the reserves.”

“It is highly unfortunate that the military had to be called in to address this situation, but the reality is that we are dealing with well-armed and highly trained individuals, who do not hesitate to terrorize local populations to achieve their aims.”

“It should be noted that this is one of the top priority missions that the BIR is dealing with at this time, and the operational and logistical scale of this operation is the first of its kind,” the BIR representative said.

High demand for ivory coupled with porous borders and weak law enforcement capacity is seriously threatening the survival of elephants in the region. Although concrete numbers are hard to come by, it is estimated that the population of elephants in the Central African region was cut in half between 1995 and 2007, with the number of elephants killed still increasing.

“The elephant killings in Bouba N’Djida earlier this year put the crisis on the map. But over the past decades, poachers have already wiped elephants across large swaths of the Central African Republic,” according to Bas Huijbregts, head of policy on illegal wildlife trade for WWF Central Africa.

“The elephant population in the north-eastern parts of Central African Republic, which used to number around 35,000 in the seventies, has effectively been massacred, with only some 50 individuals remaining. And in neighboring Chad, in the Zakouma National Park, elephant populations collapsed by 90 per cent compared to the levels that were recorded in 2006, with only 450 animals left in 2011,” Huijbregts explained.

“This is literally the last stand of elephants in these parts of Central Africa, and the operations of the Cameroonian Special Forces are indispensable to address this crisis,” Huijbregts added.

“Poaching is a harmful practice on so many fronts. Besides endangering wildlife, it degrades fragile ecosystems, corrodes respect for the rule of law, and weakens national security. It threatens the livelihoods and economic growth opportunities of local communities. Any nation that turns a blind eye to poaching essentially invites transnational criminal organizations to operate freely, bringing with them a host of other related problems and tainting the country’s international standing,” said Greg Thorne, Chargé d’Affaires at the US Embassy in Cameroon.

“The United States applauds Cameroon’s announced efforts to combat and eliminate poaching. These efforts, once launched, will have numerous positive benefits, including preservation of natural patrimony, strengthening of law enforcement and border security, and reduction in crime,” he said.

Chad and the Central African Republic are collaborating with Cameroon to fight this poaching threat, and are currently in the process of finalizing a tri-national urgency action.