Categorized as
6812
Tagged as
courtcropsevidencehomeMonsantoresultRoundup
Related

An Illinois beekeeper whose bee hives were stolen and allegedly destroyed by the Illinois Department of Agriculture has stirred up a hornet’s nest with his questions on why the state did this, and most importantly, what they did with his bees. 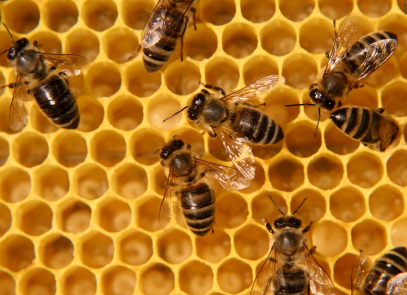 The state claims the bees were destroyed because they were infected with a disease called foulbrood.

But when the 58-year apiary keeper had his hearing—three weeks after the removal of his bees without his knowledge—the state’s “evidence” had disappeared, leaving more questions than answers about the raid on the beekeeper’s hives.

Some people, including the beekeeper, Terrence Ingram, suspect the raid has more to do with Ingram’s 15 years of research on Monsanto’s Roundup and his documented evidence that Roundup kills bees, than it does about any concerns about his hives.

Interestingly, the state’s theft targeted the queen bee and hive he’d been using to conduct the research.

A recent article by Tom Kocal in the Prairie Advocate retells the full story of how Terrence Ingram’s bees and hives wound up being taken by the Illinois State Department of Agriculture (IDofAG).

While the state claims the removal of the property was due to Ingram’s failure to comply with the Department’s notice instructing him to burn the affected hives, they have been less than open about why the inspectors came in and took the bees and hives without due process.

At a time when the Ingram’s were absent from the property. Ingram claims the Department also conducted three out of four inspections on his private property while no one was home.

While Department inspectors claim his hives had foulbrood—an allegedly highly contagious disease—Mr. Ingram believes he could prove that this was not the case. As reported by the featured Prairie Advocate article:

“Ingram knew that the inspectors could not tell what they were seeing and had warned the Department that if any of them came back it would be considered a criminal trespass. Yet they came back when he was not home, stole his hives and ruined his 15 years of research.”

Ingram initially reported the missing bees and hives as having been stolen on March 14, unaware that they’d been removed by the IDofAG. News of the theft was published in the Prairie Advocate on March 21.

As a result of that article, an area County Farm Bureau manager called the reporter, stating he knew the equipment hadn’t been stolen, but that it had been “destroyed” by the Department of Agriculture because they were infected with foulbrood and Ingram hadn’t disposed of them as instructed.

The most nonsensical part of this story is that Ingram didn’t get a hearing to determine whether his hives were affected by the disease until three weeks after they were removed and destroyed.

“I own four businesses. I am here all the time. Yet they took our bees and hives when we were not home. What did they do, sit up on the hill and watch until we left? We had not yet had our day in court to prove that our hives did not have foulbrood!”

Making matters worse, during that April 4 hearing, the Department couldn’t produce any evidence of what they’d done with the bees and the hives. Meanwhile, Ingram ended up being ordered to pay the $500 fine for violating Sections 2-1 of the Illinois Bees and Apiaries Act. According to Kocal:

“There are 2 questions that Ingram wants answered:

1) Did the IDofA, a state agency, have the right to enter Ingram’s property and confiscate a suspected “nuisance,” before Ingram had his day in court?

2) Where are his bees? The “evidence” has disappeared, and the IDofA refuses to tell Ingram where they are, before, during, and after the hearing.

“I have been keeping bees for 58 years,” Ingram said during an interview at his home and apiary. “I am not a newcomer to beekeeping, and I definitely know what I am doing. I have been teaching beginning beekeeping classes for 40 years…” At the April 4 hearing, Ingram said he felt he was able to show the court that the inspector could not tell the difference between “chilled brood” and foulbrood. He also proved to the court that the inspectors did not know the symptoms of foulbrood.”

Ingram believes the destruction of his bees and hives is more likely to be related to his research into the effect of Roundup on honey bees. He claims some 250 of his colonies have been killed off over the years by Monsanto’s broad-spectrum herbicide, used in large quantities on both conventional- and genetically engineered crops. Ingram’s research shows that Roundup can lead to what’s called chilled brood, which is an entirely different scenario.

According to Ingram, quoted from Kocal’s article:

“When Round-Up kills the adult bees there are not enough bees left in the hive to keep the young bees (brood) warm, and the young bees die from the cold (chilled brood). I tried to prove that just because foulbrood can be detected once the hive has been disturbed, doesn’t mean the hive has foulbrood.

Inside a honeybee hive is one of the cleanest places you can find. Anything that is a problem, if the bees can’t remove it, they cover it with propolis, which is an antiseptic… When you go into the comb and cut it up, disturb it like the investigators did, then send it to a lab, it exposes foulbrood to the world. In the beehive, it’s covered up. The bees aren’t affected by it. But you can find it by sending it in to a lab.”

Ingram has studied the effects of Roundup on honeybees for the past 15 years, and he believes he had built up sufficient amount of data to show that the herbicide causes not just bee die-offs, but also Colony Collapse Disorder (CCD)—a mysterious phenomenon that has decimated an estimated one-third of all honey bees since 2006. While some bees inexplicably die, many simply vanish and never return to their hives. Ingram told Kocal that:

“CCD is a calamity that is affecting honeybee colonies across the nation. In fact, I had one queen, which had survived three summers of spraying and three winters. I was planning to raise daughters from that queen to see if she may have had some genetic resistance to Roundup. But she and her hive were taken during the theft. I don’t even know where the bees and my equipment are. They ruined 15 years of my research.”

… “I asked Rep. Sacia to take the teeth out of the current law, preventing untrained inspectors from doing sneak inspections without the beekeeper present, killing their bees and burning their equipment, or forcing organic beekeepers out of business, telling them that they have to use chemicals to keep bees in Illinois. Are the chemical companies really running our food supply?”

… “Is Illinois becoming a police state, where citizens do not have rights?” Ingram asked in desperation. “Knowing that Monsanto and the Dept. of Ag are in bed together, one has to wonder if Monsanto was behind the theft to ruin my research that may prove Roundup was, and is, killing honeybees. Beekeepers across the state are being threatened that the same thing may be done to their hives and livelihood. I was not treated properly, I don’t want to see this happen to anyone else in this state, and I want this type of illegal action to end.”

Monsanto is the New Owner of Leading Bee Research Firm

Ingram is quite correct about chemical companies like Monsanto—they are seeking to take nearly full control of the food supply by controlling virtually every aspect of crop production. So he has cause to be suspicious when it comes to the question of who ordered the theft and destruction of his bees. It wouldn’t be the first time the biotech giant has used questionable tactics to get rid of its adversaries. And research implicating Monsanto as the cause of CCD could definitely cause some harm to the company’s bottom line.

One of the forerunning theories of colony collapse disorder (CCD) is that it’s being caused by genetically engineered crops—either as a result of the crops themselves or the pesticides and herbicides applied on them, such as Roundup. Ingram’s research could potentially have strengthened this theory. Monsanto’s Roundup herbicide is one of the most widely used herbicides there is. As a result, Monsanto has received increasing amounts of bad publicity over their potential role in the devastating demise of bees around the globe.

There’s no doubt that CCD is a serious problem. To get an idea of the magnitude of the importance of bees, the National Resources Defense Council (NRDC) estimates that without bees to act as pollinators, the United States alone could lose $15 billion worth of crops. Research into the phenomenon is therefore absolutely crucial, to identify the sources of the problem.

Monsanto however, keeping true to form, appears to have taken measures to control the direction of the research into their products’ effect on bees. As I recently reported, Monsanto has purchased one of the leading bee research firms – one that, conveniently, lists its primary goal as studying colony collapse disorder! Monsanto bought the company, called Beeologics, in September 2011, just months before Poland announced it would ban growing of Monsanto’s genetically modified MON810 maize, noting, poignantly, that “pollen of this strain could have a harmful effect on bees.”

The ongoing blight of genetically engineered crops has been implicated in CCD for years. In one German study,iv when bees were released in a genetically engineered rapeseed crop, then fed the pollen to younger bees, scientists discovered the bacteria in the guts of the young ones mirrored the same genetic traits as ones found in the GE crop, indicating that horizontal gene transfer had occurred.

But Roundup is not the only herbicide that has come under scrutiny. Newer systemic insecticides, known as neonicotinoids, two prominent examples of which include Imidacloprid and Clothianidin, are also frequently used on both conventional- and genetically engineered crops and have been implicated in CCD. In fact, bee colonies started disappearing in the U.S. shortly after the EPA allowed these new insecticides on the market. Even the EPA itself admits that “pesticide poisoning” is a likely cause of bee colony collapse as these pesticides weaken the bees’ immune system.