Germany’s voluntary GMO-free labeling program is gaining momentum, generating $11 billion in sales in the country in 2018, according to a report by the US Dept of Agriculture’s (USDA) Global Agricultural Information Network (GAIN) service. 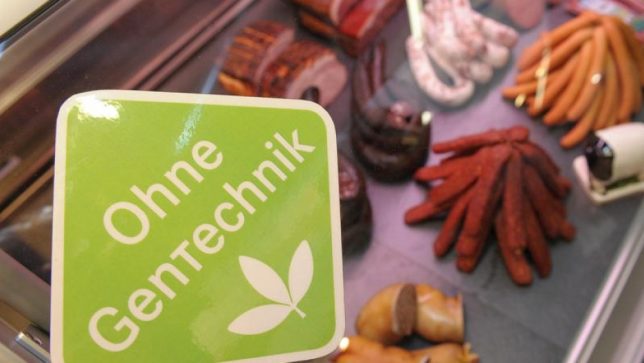 According to the report, German consumers’ increasing awareness of and preference for Ohne Gentechnik (“without genetic engineering”) labelled foods “is also driving demand in the market for GMO-free animal feed, leading to marketing opportunities for growers and producers of non-GMO feed ingredients and additives, while eroding demand for US exports of genetically engineered soy”.

The USDA’s report is a revealing admission from a body that has long been dedicated to promoting the US’s GM crop exports.

GMO labelling in the EU

Since 2004, the EU has required on-label disclosure for foods and animal feed products that contain GM ingredients. However, there is no mandatory EU labelling requirement for non-GMO food products or for foods derived from animals fed GMO feed.

In 2008, Germany enacted its own legislation establishing a voluntary GMO-free labelling program. The law set standards for the voluntary labelling of non-GMO plant-based foods and for products derived from livestock fed with non-GMO feed. In 2010, the German Federal Ministry of Food and Agriculture delegated authority to administer the voluntary GMO-free labelling standard to the Verband Lebensmittel ohne Gentechnik (Association for Food without Genetic Engineering), commonly known by its German acronym, VLOG.

VLOG is a non-profit company with the exclusive authority to license food manufacturers’ and retailers’ use of the standard Ohne Gentechnik (GMO-free) label and animal feed producers’ use of the VLOG Geprüft (VLOG Approved) label. VLOG is a membership-based organization open to any consumer or business; however, most members are farmers, processors, retailers, marketers, food producers, and trade associations.

A company does not have to obtain VLOG membership to secure a license to use the Ohne Gentechnik label on its products, but many licensees are also VLOG members. VLOG has over 700 members and licensees that represent nearly every food and agribusiness product sector, from dairy, eggs, and vegetables to cereals, meats, and beverages.

Sales of GMO-free foods in Germany, labeled as Ohne Gentechnik (without genetic engineering), are steadily rising, the USDA report says. In 2018, 10 years after Germany passed legislation establishing the Ohne Gentechnik standard, German consumers spent $11 billion on foods bearing the Ohne Gentechnik label — a 41 percent increase from 2017. Milk and dairy products comprised the bulk of those sales (66 percent), with poultry and eggs making up 18 percent and 12 percent of Ohne Gentechnik sales, respectively.

The growing popularity of Ohne Gentechnik products reflects German consumers’ food perceptions and preferences. In a study commissioned by Germany’s Federal Ministry for the Environment, Nature Conservation and Nuclear Safety, 93 percent of respondents said they wanted to know when their food came from animals fed genetically modified feed. Up to 63 percent of German consumers check food labels for GMO-free claims, which they cite as an important influence on their purchasing decisions. Of German consumers who purchase organic food, 58 percent claim to purchase organic products because they are GMO-free.