Wild, edible plants subject to drift from the herbicide glyphosate during forestry operations can be contaminated with the chemical an entire year after an initial application, according to a new study published in the Canadian Journal of Forest Research. 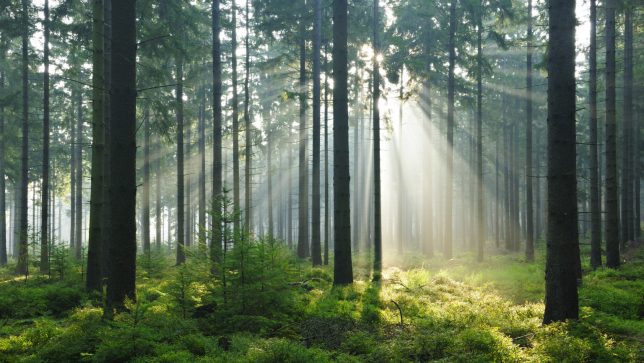 Glyphosate is often used in forestry to knock down unwanted trees, shrubs, and other plants after clear-cutting to provide room for the regrowth of trees deemed valuable. However, this new research shows that “non-target” species, such as raspberries and blueberries, eaten by wildlife and sometimes wild foraged by humans can retain significant levels of glyphosate contamination due to drift and overspray.

Forester Lisa Wood, PhD, from the University of Northern British Columbia began this research based on input and requests from Canadian indigenous First Nations communities. Back in 2013, shrubs foraged by traditional berry-pickers in northeastern British Columbia were sampled and found to contain glyphosate residues, leading to the need for a broader investigation.

Dr. Wood sampled the roots and shoots of 10 plant species from an area that had been aerially sprayed with glyphosate a year prior as part of forestry operations to clear aspen and make room for coniferous re-plantings. The 10 plants, which included highbush cranberry, prickly rose, bunchberry, pink wintergreen, blueberries and red raspberries, among others, were compared against those chosen from a control region where glyphosate was not applied.

Results show that 12 of 23 plant shoots (new growth) sampled contain detectable levels of glyphosate one year after application, with some levels ranging over 1 ppm. The roots of plants contain higher levels on average, ranging from .1 ppm to over 4 ppm. Researchers specifically analyzed the fruit of raspberries and blueberries, finding average glyphosate levels of roughly .14 ppm.

“If a plant dies from an application it falls to the soil and there are microbes that gobble up the glyphosate,” Dr. Wood told the Vancouver Sun. “When they don’t die, they have interesting ways of coping, often by storing and isolating the glyphosate.” In general, plants appear to store glyphosate in their roots during dormancy, but translocate the chemical to shoots during the growing season. Dr. Wood found that lower growing plants appear to contain higher levels of glyphosate contamination than those farther from the ground.

Many of the plants sampled have levels of contamination over the maximum residue limit of glyphosate the U.S. Environmental Protection Agency sets for some food commodities. Wild foragers and hikers will need to think about past chemical use in an area where wild fruiting berries occur. The study also has important ethnobotanical implications for North American indigenous First Nations, which use or have used the sampled plants for a variety of traditional means. As the study indicates, “Glyphosate may cause a disruption to the medicinal quality of plants harvested; there is evidence that glyphosate disrupts some plant secondary metabolites, and these metabolites could be the phytochemicals responsible for a given medicinal effect.”

Progressive forestry practices that forgo the use of toxic herbicides like glyphosate are gaining steam. In Canada, the Herbicides Alternative Project, a collaborative group consisting of the Tembec, Mushkegowuk Environmental Research Centre and other First Nations are working to reduce and eliminate forestry herbicides.