Two public health researchers who battled powerful corporate interests to uncover the deadly effects of industrial herbicides, solving a medical mystery and protecting the health of farming communities across the world, will receive the 2019 Scientific Freedom and Responsibility Award from the American Association for the Advancement of Science. 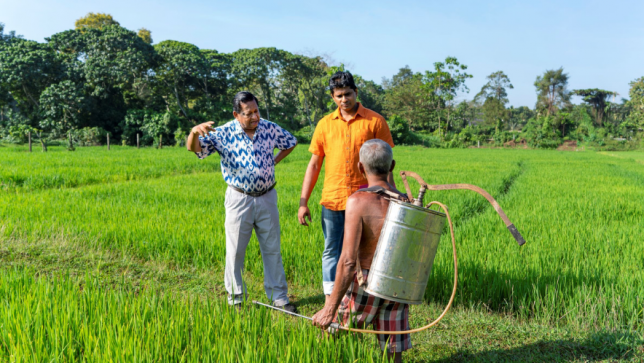 Drs. Sarath Gunatilake and Channa Jayasumana faced death threats and claims of research misconduct while working to determine the cause of a kidney disease epidemic that has claimed tens of thousands of lives in their home country of Sri Lanka and around the world. Ultimately, their advocacy led to the culprit, an herbicide called glyphosate, being banned in several affected countries.

“To right a wrong when significant financial interests are at stake and the power imbalance between industry and individual is at play takes the unique combination of scientific rigor, professional persistence and acceptance of personal risk demonstrated by the two scientists recognized by this year’s award,” says Jessica Wyndham, director of the Scientific Responsibility, Human Rights and Law Program at AAAS.

Beginning around 1994, rice farmers in Sri Lanka’s North Central Province began falling ill with Chronic Kidney Disease. The epidemic was unique in that those succumbing to the disease were relatively young and did not suffer from ailments associated with CKD, such as diabetes and hypertension. In 2011, the country’s Ministry of Health invited Gunatilake, a physician and researcher at California State University, Long Beach to investigate the cause of the disease.

At the time, Jayasumana, also a physician, was struggling to find funding to research the CKD epidemic for his doctoral degree at Rajarata University, in North Central Province. He decided to join California State University, Long Beach as a visiting scholar under Gunatilake’s supervision, bringing with him samples of urine, drinking water and rice. Gunatilake and Jayasumana found that glyphosate, marketed mostly by Monsanto as Roundup, was transporting arsenic, cadmium and other heavy metals to the kidneys of those drinking contaminated water, causing CKD.

In 2014, they published their results in the International Journal of Environmental Research and Public Health. Because similar epidemics were occurring in Central America, North Africa and Southeast Asia, the study earned worldwide attention. To date, the paper has received 23,000 downloads and 64 citations.

Jeopardizing the profits of glyphosate distributors, subsidiaries and importers, however, did not come without consequences. Gunatilake and Jayasumana received death threats, and twelve scientists who had obtained industry-funded grants filed a research misconduct complaint against Gunatilake. Eventually, he was exonerated, after a California State University, Long Beach scientific investigation panel dismissed the complaint.

Thanks to pressure applied by a massive public health campaign led by Gunatilake, the Sri Lankan president created the National Project for Prevention of Kidney Diseases, naming Jayasumana as director. In 2015, Sri Lanka became the first of many countries to ban the import of glyphosate. Three years later, Sri Lanka lifted the import ban, but continued to restrict the use of glyphosate on tea and rubber plantations.

In the past few years, Gunatilake has convened multi-disciplinary international conferences to discuss the dangers of glyphosate and raised more than $20,000 to help the families of victims. CKD has claimed the lives of at least 25,000 Sri Lankans and 20,000 Central Americans.

“What started as a bold effort to provide a voice for the impoverished, powerless rice paddy farmers in Sri Lanka has now blossomed into a worldwide environmental movement through research, advocacy, networking and collaboration,” wrote public health professional Hanan Obeidi in the award nomination letter.

The AAAS Scientific Freedom and Responsibility Award was established in 1980. It honors scientists, engineers or organizations whose exemplary actions have demonstrated scientific freedom and responsibility in challenging circumstances. Achievements that the award recognizes include acting to protect the public’s health, safety or welfare; focusing public attention on important issues related to scientific research, education and public policy; and establishing important new precedents in carrying out the social responsibilities of scientists or in defending the professional freedom of scientists and engineers. The award consists of a $5,000 prize and a commemorative plaque.