MegaFood®, an award-winning dietary supplement brand whose products are made with real, whole foods, has certified its entire line glyphosate residue free (GRF), the company announced on Thursday. 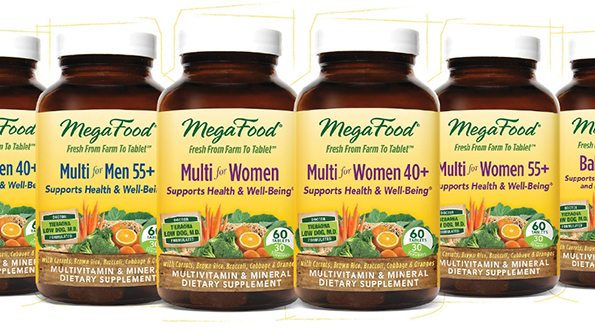 “We’re honored to be the first supplement company with a completely glyphosate residue free certified line of products,” said Robert U. Craven, president and CEO of FoodState, Inc., manufacturer and parent company of MegaFood. “Earning this certification is just one part of our continued commitment toward what we call ‘The Big T Transparency,’ which is complete operational transparency with our employees, suppliers, retailers and customers. More than that, it’s the principle our company was founded on: a commitment to quality and purity above all, so that we can provide our customers with the most authentic nourishment possible.”

Glyphosate, the active ingredient in Roundup®, is the number one herbicide used in the United States. It’s sprayed heavily on GMO- and conventionally-grown agricultures at harvest, and used frequently in home gardens, public parks and schools. Glyphosate use has skyrocketed over the past decade: its use has increased nearly 15-fold over the past two decades. The World Health Organization (WHO) has classified glyphosate as “probably carcinogenic in humans,” and linked its use to lymphoma.

“MegaFood customers are highly conscientious: they care just as much as what goes into their bodies as what doesn’t, including toxins. We share their concerns about the use of herbicides and pesticides in our food chain,” said Craven. “Our hope as a company is that other supplement manufacturers will eventually follow suit in earning their own GRF certifications: providing customers with top-tier products isn’t just good business, it’s good for people, period.”

Henry Rowlands, founder of The Detox Project, is also excited about his organization’s partnership with MegaFood:

“I’m delighted that MegaFood, as a leader for transparency within the supplement world, has decided to certify Glyphosate Residue Free. Consumers want to avoid toxic chemicals such as glyphosate in the food products and supplements they buy and currently one of the only ways to do this is to look for our label,” said Rowlands. “The Detox Project has received massive interest in Glyphosate Residue Free certification since it launched in May 2017, and brands like MegaFood joining us give our message a huge boost. We believe everyone has the right to know what toxic chemicals are in our bodies and in our food.”

About MegaFood®
Fresh From Farm To Tablet™, MegaFood is as real as it gets. Since 1973, MegaFood has been committed to creating products that use real food from family-owned farms to make a real difference, and has produced some of the most effective and award-winning supplements available today. A pioneer in the natural products industry, MegaFood was the first company to make their FoodState vitamin and minerals from scratch starting with farm fresh whole foods. MegaFood continues to innovate by manufacturing more than 44 individual FoodState nutrients using their proprietary Slo-Food Process, all in their own facility in New Hampshire. Their FoodState nutrients are blended and combined to create over 60 handcrafted supplements that make up the MegaFood product line today, found in over 2,400 natural products retailers and vitamin specialty shops throughout the United States.

About the Detox Project
The Detox Project is a research and certification platform that brings awareness to the public by testing for toxic chemicals.