Two United Nations experts are calling Tuesday for a comprehensive new global treaty to regulate and phase out the use of dangerous pesticides in farming, and move towards sustainable agricultural practices. They say: “excessive use of pesticides are very dangerous to human health, to the environment and it is misleading to claim they are vital  to ensuring food security.” 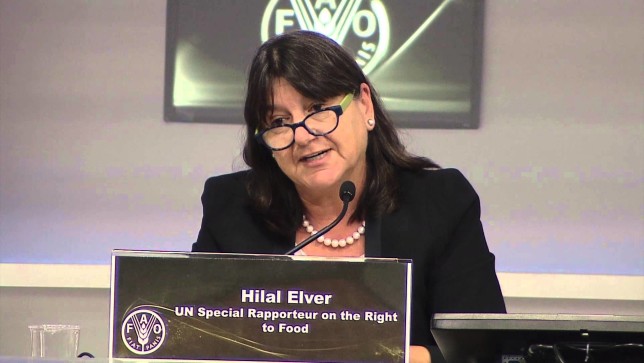 The full report is available here

The Special Rapporteurs pointed to research showing that pesticides were responsible for an estimated 200,000 acute poisoning deaths each year. The overwhelming number of fatalities, some 99%, occurred in developing countries where health, safety and environmental regulations were weaker.

The experts warn that certain pesticides can persist in the environment for decades and pose a threat to the entire ecological system on which food production depends. The excessive use of pesticides contaminates soil and water sources, causing loss of biodiversity, destroying the natural enemies of pests, and reducing the nutritional value of food. The impact of such overuse also imposes staggering costs on national economies around the world.

The experts say the use of neonicotinoid pesticides is particularly worrying because they are accused of being responsible for a systematic collapse in the number of bees around the world. Such a collapse, they say, threatens the very basis of agriculture as 71% of crop species are bee-pollinated.

While acknowledging that certain international treaties currently offer protection from the use of a few pesticides, they stressed that a global treaty to regulate the vast majority of them throughout their life cycle does not yet exist, leaving a critical gap in the human rights protection framework.

“Without harmonized, stringent regulations on the production, sale and acceptable levels of pesticide use, the burden of the negative effects of pesticides is felt by poor and vulnerable communities in countries that have less stringent enforcement mechanisms,” they emphasized.

The Special Rapporteurs point to denials by the agroindustry of the hazards of certain pesticides, the scale of the impacts, as well as the inappropriate shifting of blame to farmers for misusing its products. They express concern about aggressive, unethical marketing tactics that remain unchallenged, and huge sums spent by the powerful chemical industry to influence policymakers and contest scientific evidence.

The Special Rapporteur on Food highlights developments in agroecology, which replaces chemicals with biology, saying its approaches are capable of delivering sufficient yields to feed and nourish the entire world population, without undermining the rights of future generations to adequate food and health.  And the Special Rapporteur on Toxics points to examples of where safer alternatives to hazardous pesticides and other toxic chemicals were developed and adopted only after strong regulatory pressures by States on industry.

Urging a new approach to farming, they say: “It is time to overturn the myth that pesticides are necessary to feed the world and create a global process to transition toward safer and healthier food and agricultural production.”

Mr. Baskut Tuncak (Turkey) was appointed Special Rapporteur on the implications for human rights of the environmentally sound management and disposal of hazardous substances and wastes by the UN Human Rights Council in 2014.