GMO Free USA published Tuesday the results of independent lab tests documenting that a box of Kellogg’s Kashi GoLean Original cereal, which had not been verified by the Non-GMO Project, contained high levels of the World’s most used herbicide glyphosate residue and an even higher level of AMPA (aminomethylphosphonic acid), a metabolite of glyphosate. 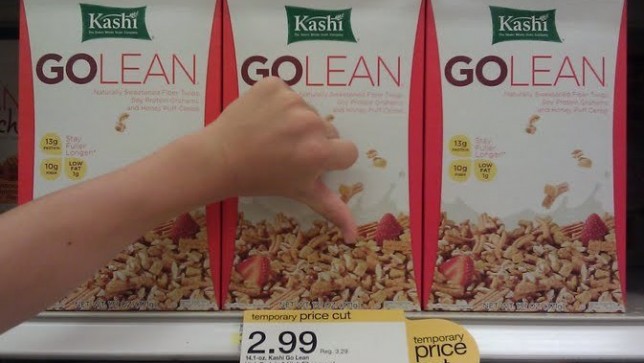 Meanwhile, Kellogg also reported second-quarter revenue on Tuesday that revealed a 5.1 percent decline in sales, which was the seventh time in eight quarters that sales had fallen. Sales in the company’s U.S. snacks business, its biggest, fell 2 percent, while sales in the U.S. morning foods business, which includes cereals, fell 2.2 percent.

Find Out Everything about Glyphosate Here

“During our July tour with Neil Young to educate concertgoers about GMOs, we were shocked to see unverified and Non-GMO Project verified boxes of Kashi GoLean Original mixed together on the same display at a Brockton, Massachusetts Stop & Shop grocery store. This is a shameless attempt to unload Kashi’s GMOs onto unsuspecting customers. There are likely thousands of boxes on store shelves across the nation and we’re calling on the public to demand that store managers remove those boxes immediately,” said Luan Van Le, GMO Free USA’s Communications Director.

Glyphosate is the active chemical ingredient in Roundup herbicide as well as many other name brand glyphosate-based herbicides. These herbicides are the most widely used in the world and their use has increased exponentially with the introduction of GM crops. In response to agrichemical industry requests, the EPA has incrementally increased the allowable tolerance levels of glyphosate residues in crops since their introduction into our food supply.

A glyphosate residue test was conducted by an accredited lab using the Specific LC/MS/MS testing method with a minimum detectable level of 0.02 ppm. The test documented the presence of glyphosate in the box of Kashi GoLean Original which was not verified by the Non-GMO Project, at a level of 0.68 ppm, or 0.68 mg/kg. This level is nearly 6 times higher than the levels detected in the independent testing GMO Free USA commissioned on Froot Loops. The test also documented the presence of AMPA (aminomethylphosphonic acid), a metabolite of glyphosate, at an even higher level of 0.81ppm or 0.81mg/kg. This is the first time the lab has documented the presence of AMPA in the products GMO Free USA had tested. The test results give significant reason for concern. There is a growing body of scientific evidence that links glyphosate to health and environmental harm.