A first study of its kind has found that GM maize transgenes have penetrated the informal seed supplies of smallholder farmers in the Eastern Cape, South Africa. The study screened for transgenes in external fields, home gardens and local household seed holdings in a village where GM insect-resistant maize had been previously grown from 2001–2008 and also analysed the seed management practices of farmers there. 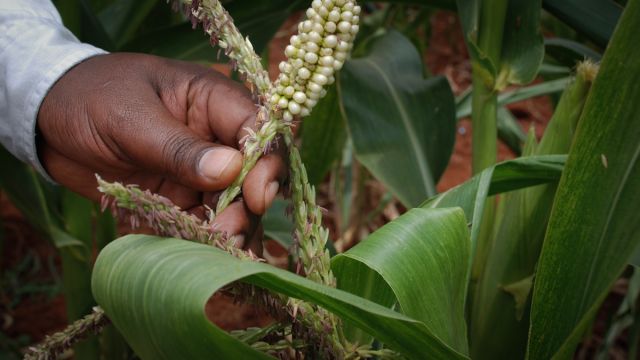 Genetically modified (GM) crops were introduced in South Africa in 1997. By 2013, South Africa had 2.3 million hectares of GM crops under cultivation, 78% of which was insect-resistant and/or herbicide-tolerant maize.

The researchers found that the commonly used transgene promoter p35s occurred in one of the 796 maize leaf samples (0.0013%) and in five of the 20 seed batch samples (25%). Three of the five included herbicide-tolerant maize (NK603) while the remaining two included genes for insect resistance (from MON810).

The researchers concluded that GM maize is grown in such close proximity to other locally recycled and purchased maize varieties that transgene flow must be expected at a high rate, evidenced by the findings that the transgenes have been mixed into seed storages of the small farmers of the study village who constantly share and recycle their seeds.

The repercussions include ecological risks such as resistance development as well as possible infringement of intellectual property rights and permit conditions. The study demonstrates how difficult it is to cultivate GM and non-GM crops together in small rural farms under current permit regulations for GM crops.

Small-scale subsistence farmers in South Africa have been introduced to genetically modified (GM) crops for more than a decade. Little is known about i) the extent of transgene introgression into locally recycled seed, ii) what short and long-term ecological and socioeconomic impacts such mixing of seeds might have, iii) how the farmers perceive GM crops, and iv) to what degree approval conditions are followed and controlled. This study conducted in the Eastern Cape, South Africa, aims primarily at addressing the first of these issues. We analysed for transgenes in 796 individual maize plants (leaves) and 20 seed batches collected in a village where GM insect resistant maize was previously promoted and grown as part of an governmental agricultural development program over a seven year period (2001–2008). Additionally, we surveyed the varieties of maize grown and the farmers’ practices of recycling and sharing of seed in the same community (26 farmers were interviewed). Recycling and sharing of seeds were common in the community and may contribute to spread and persistence of transgenes in maize on a local or regional level. By analysing DNA we found that the commonly used transgene promoter p35s occurred in one of the 796 leaf samples (0.0013%) and in five of the 20 seed samples (25%). Three of the 20 seed samples (15%) included herbicide tolerant maize (NK603) intentionally grown by the farmers from seed bought from local seed retailers or acquired through a currently running agricultural development program. The two remaining positive seed samples (10%) included genes for insect resistance (from MON810). In both cases the farmers were unaware of the transgenes present. In conclusion, we demonstrate that transgenes are mixed into seed storages of small-scale farming communities where recycling and sharing of seeds are common, i.e. spread beyond the control of the formal seed system.