300 farmers have taken over the building where Brazil’s GMO regulator CTNBio was meeting Thursday to decide about whether to approve GE eucalyptus trees. The meeting was cancelled. 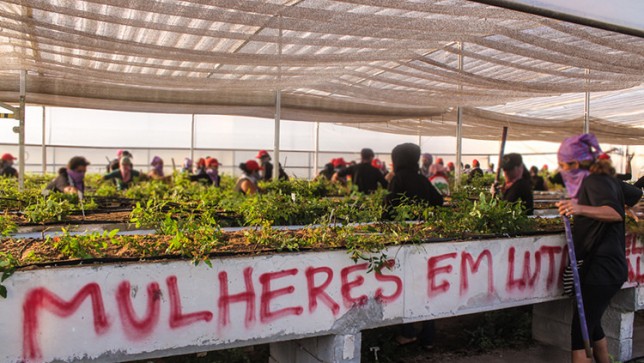 Also Thursday, 1,000 women took over operations of FuturaGene across Brazil. The action included the destruction of all GE eucalyptus seedlings. About 1,000 women of the MST occupied the Suzano company (parent corporation to GE tree company FuturaGene) in Itapetininga, Sao Paulo, Brazil.

On Thursday morning about 300 farmers organized by La Via Campesina occupied the meeting of the Brazil National Biosafety Technical Commission (CTNBio), which was convening to discuss the release of three new varieties of transgenic plants in Brazil including genetically engineered eucalyptus trees. The meeting was interrupted and decisions were postponed. Earlier in the morning on Thursday, 1,000 women from the Brazil Landless Workers’ Movement (MST) in the states of São Paulo, Rio de Janeiro and Minas Gerais occupied the operations of FuturaGene Technology Brazil Ltda, a subsidiary of Suzano timber corporation, in the municipality of Itapetininga, in São Paulo.

According to Atiliana Brunetto, a member of the National MST, the historic decisions of the Commission must respect the Brazilian legislation and the Biodiversity Convention to which Brazil is a signatory. “The precautionary principle is always ignored by CTNBio. The vast majority of its members are placed in favor of business interests of the large multinationals at the expense of environmental, social and public health consequences,” she said. For Brunetto all approved GMOs mean more pesticides in agriculture, since the packets always approved for marketing include a type of agricultural poison.

“Brazil is the largest consumer of the world’s pesticides since 2009. A recent survey by the University of Brasilia found that, in the most optimistic case, 30% of the food consumed by Brazilians is unsafe to eat due to contamination by pesticides,” added Brunetto.

In the case of the GM eucalyptus, the application for release was made by pulp and paper company Suzano.

“If approved by the committee these GE faster growing eucalyptus will mature in only 4 years, as opposed to 6-7 years presently in non-GMO eucalyptus. The water consumption will increase by 25 to 30 liters/day per eucalyptus planted. We are again calling attention to the danger of green deserts,” said Catiane Cinelli, a member of the Rural Women’s Movement.