In an open letter published in The Times newspaper and promoted through a digital billboard at Waterloo station, American celebrities, Susan Sarandon, Daryl Hannah and Robert Kennedy Jr joined US NGOs, trade groups and businesses such as Food & Water Watch, the Sierra Club, the Rachel Carson Council, Friends of the Earth, the Organic Consumers Association, Dr Bronner’s and NYR Organic to warn British citizens of the dangers of growing GM crops and urge them to speak out before it’s too late. 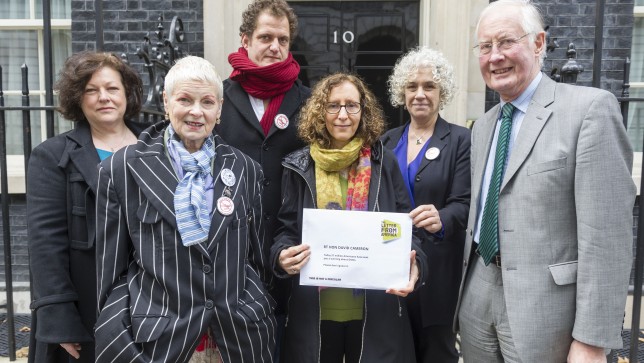 The warning comes at a critical time as the European Parliament will vote in January whether member states can decide for themselves to grow GM crops or not. If this legislation is passed, the UK could see the planting of commercial GM crops within the next six to eighteen months.

The letter, which highlights the problems and challenges which American farmers, consumers and others have faced over nearly two decades of growing and eating GM crops, was delivered to Downing Street today by a delegation which included fashion designer Vivienne Westwood, chef Val Warner and MPs, Zac Goldsmith and Michael Meacher. It also included the two campaigners from the US who helped drive the letter, Pamm Larry and Diana Reeves, as well as Beyond GM Director, Pat Thomas, who coordinated the effort in the UK.

The fully referenced letter, signed by groups and individuals representing some 57 million members and supporters, argues that GM crops have never delivered on their promises to increase yields and profits or to decrease pesticide use. In fact, they have done the opposite with the cost of growing GM crops now greater than conventional crops in the US and pesticide use 24% higher amongst GM farmers than non-GM farmers planting the same crops.

The environmental harm caused by this increased herbicide has also led to the destruction of vital insect and bee populations. The population of the Monarch butterfly, for example, has dropped by over 80% in some parts of the US as the herbicide, Roundup, kills milkweed – the Monarch’s key food source. It also damages soil structure and makes essential micronutrients unavailable to the plant and therefore our food.

The Americans warn that after nearly 20 years of use, GM ingredients are now everywhere in their food chain – over 70% of all processed foods in the US contain them. As a result, traces of glyphosate – the active ingredient in Roundup – have been found in high levels in the breast milk and urine of American mothers as well as in their drinking water. The levels in the breast milk were around 1,600 times higher than what is currently allowable in European drinking water.

The American signatories believe their experience of using what they call a “failing agricultural technology” serves as a warning to other countries about to journey down the same road. They conclude that GM food “has never really been about public good, or feeding the hungry, or supporting farmers. Nor is it about consumer choice. Instead it’s about private, corporate control of the food system”.

Actress, Susan Sarandon says: “Instead of bringing certainty and security, GMOs have raised more and more worrying questions about their effectiveness, their necessity, and even their safety. Polls show that the majority of US citizens – and in fact citizens everywhere – either want them labelled or taken out of the food system altogether.”

Activist attorney Robert Kennedy Jr says: “An informed and engaged public is one of our greatest weapons against widespread threats to health and environmental justice. Initiatives like The Letter from America highlight clearly the problems we have faced in the US in the 17 years we have been planting and eating GMOs.”

Vivienne Westwood, who was one of the British celebrities who helped deliver the petition to Downing Street this morning says: “GMOs are a democratic issue. They are a massive, unethical experiment in human and environmental health. People are voicing legitimate concerns about how they and their families will be affected by eating them, how planting them will affect the environment and biodiversity, how forcing them on developing countries will disempower and impoverish farmers there and most of all why, if so many unanswered question remain about GMOs, our government is continuing to try and force them on the British public.”

Pat Thomas, the campaign director for Beyond GM says: “The American experience of GMOs shines a light on how our own food future will unfold if we continue to race pell-mell down the road to a genetically modified Britain. It also can teach us about the importance and effectiveness of public engagement. Biotech companies have spent a lot of time and money sidelining public opinion, and turning the GM debate into an abstract and academic affair. It’s time the public was brought back into the ‘public debate’ about what they eat, and what they feed their children, and it’s time politicians and regulators started listening.”

For the full version of the Letter from America please visit: www.theletterfromamerica.org