The Global GMO Free Coalition welcomes the launch of the largest ever study on GMO and pesticide safety – Factor GMO. This is the type of study that should have been carried out on all GM foods before they were released into our food and feed supplies. 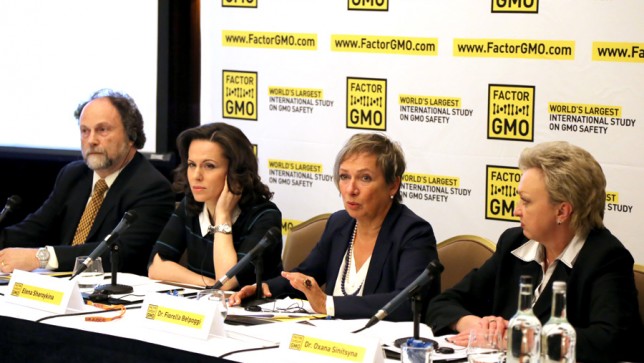 Factor GMO will include three arms: carcinogenicity, toxicity and multi-generational. These arms will give clear information on the health impacts of the Roundup Ready GM maize variety being studied and the glyphosate herbicide with which it is grown.

Find Out More and Donate: www.gmofreeglobal.org/en/news/post/global-gmo-free-coalition-helps-fund-worlds-largest-gmo-safety-study

The Global GMO Free Coalition (GGFC) urges governments and regulatory authorities worldwide to use the precautionary principle regarding GM crops and glyphosate / Roundup until the results of this comprehensive study are released over the next 3 years. Any other decision by regulatory authorities will leave them open to future accusations of endangering public health based on a lack of comprehensive evidence on the safety of GM crops and their associated pesticides.

Factor GMO has already raised more money than any other GMO/pesticide safety study in history and is close to the full $25 million needed for the full comprehensive experiment.

Factor GMO announced at its launch that it will accept funds from all sources except the biotech industry. It is for this reason that the GGFC is launching a worldwide fundraising campaign starting today and lasting until April 2015.

The Global GMO Free Coalition aims to help Factor GMO to raise the required funds – $3 million before April 2015 – to include the full multi-generational arm needed to identify whether the GM maize variety studied and/or glyphosate and Roundup cause infertility or birth defects.

Please help fund the study here. (The Global GMO Free Coalition’s fiscal sponsor in the U.S., Organic Consumers Association (OCA), has enabled us to give tax deductions to U.S. funders):

Find Out More and Donate: www.gmofreeglobal.org/en/news/post/global-gmo-free-coalition-helps-fund-worlds-largest-gmo-safety-study

Ronnie Cummins, International Director, the Organic Consumers Association: “For years, consumers have been exposed to Monsanto’s Roundup through multiple channels, including the pollution of groundwater that results from the planting of millions of acres of Roundup-resistant corn and soy crops. Last year, the U.S. Environmental Protection Agency again ruled in favor of Monsanto when the agency approved the allowance of higher levels of glyphosate, the key ingredient in Roundup, on fruits and vegetables sold for human consumption. We fully support this unprecedented study which we believe will provide, once and for all, irrefutable scientific evidence that Roundup should be banned.”

Claire Robinson, Research Director, Earth Open Source: “We welcome the announcement of this experiment and encourage everyone concerned about GMO safety to help fund it – even though, as is the case with all objective scientific research, the findings may not be what we expect. If no effects are found from the GMO and Roundup, we can draw some reassurance about the safety of this particular GMO and the Roundup herbicide that is used on 80% of GM crops worldwide. But if toxic effects are found, regulators and the GMO industry will have some serious questions to answer.”

Henry Rowlands, Director, Sustainable Pulse:  “It is with optimism that I welcome this opportunity to find out the full truth about the possible harm caused by GMOs and pesticides to human health. This is the Ultimate Study that we have all waited 20 years for.”

Sayer Ji, Founder and Director, GreenMedInfo.com; “In a day and age where we have either science through proclamation or published research that is merely an excreta of capital administered by multinational corporations with agendas contrary to the public good, nothing could be more important than crowd-funding studies that produce real science on the effects of agrochemicals and biotechnology whose promised benefits are not matched by objective, special interest free bias. The time is now for the world to say enough is enough and put their money where their mouth is, literally.”

Scott Kinnear, Director of The Safe Food Foundation & Institute: “The Australian Regulator Food Standards Australia New Zealand has consistently rejected research that is adverse to GM or Roundup on the basis that it is not published in a peer reviewed journal or is of poor quality (their opinion) and thus can be ignored. We welcome the announcement of this research that we hope will put to bed any doubt about the safety or otherwise of Roundup and the GM foods examined. We would hope that Regulators worldwide will support this independent research and provide their views on how it should be conducted in a constructive and meaningful manner.”

Diana Reeves, Director, GMO Free USA: “In the U.S., where genetically engineered crops receive rubber stamp approval based on voluntary industry safety assessments, we anxiously await the results of this study. We hope this comprehensive, multinational study will lead to the development of international protocols for safety testing, which should be required on each unique, genetically engineered variety prior to introduction into our food supply and our environment. The multigenerational aspect of this study is crucial to assess the impact of GE foods and glyphosate on fertility. The general public has a tremendous opportunity to ensure that this very important part of the study is conducted and we hope you will make a contribution toward the remaining $3 million required to cover the cost.”