GMO bans pass in counties in Hawaii and California, while millions in industry spending drown out labeling efforts in Colorado. 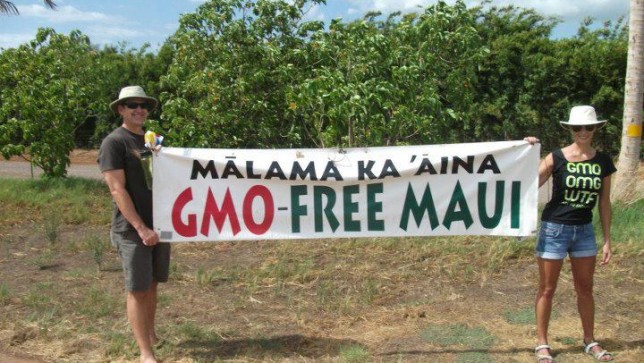 Residents of Maui County in Hawaii, frequently referred to as ‘GMO Ground Zero,’ claimed a victory Tuesday evening when a measure to ban the planting of genetically modified organisms (GMOs) passed with 50.2 percent.

Agribusiness giants Monsanto and Dow AgroSciences, which for decades have run enormous growing and testing operations on the island, spent nearly $8 million dollars to defeat the ban, making it the most expensive campaign in Hawaii’s history, according to Honolulu Civil Beat.

Known as the Maui County Genetically Modified Organism Moratorium Initiative, the measure will ban all GMO growth, testing or cultivation in the county until an environmental and public health study is conducted and finds the proposed cultivation practices to be safe and harmless.

“I think that this is a really strong message to the entire agrochemical industry in the state of Hawaii that we are no longer going to sit idly by and watch them expand their operations without the kinds of regulations that ensure the health and safety of people across Hawaii,” Ashley Lukens, who directs the Hawaii chapter of the Center for Food Safety, told Civil Beat.

Hawaiians have become increasingly concerned over GMO crop production and how its associated heavy pesticide use impacts the health of both people and environment. Over 80 different chemicals are sprayed on GMO fields, which ban proponents warn, creates billions of untested chemical combinations which then spread into “our neighborhoods, oceans, reefs, groundwater, drinking water, food supply and bodies.”

Last year, the Hawaiian Department of Health tested the surface water around the island and pesticides were found in 100 percent of the samples. According to official election results, the moratorium passed with just over 1,000 votes. In comparison to the millions raised in industry dollars by ban opposition group Citizens Against the Maui County Farming Ban (CAMCFB), supporters of the initiative raised just under $65,000.

“It’s only a matter of time before no amount of spending by Monsanto and Pepsi will be able to suppress the evidence against our industrial model of toxic monoculture crops.”
—Katherine Paul, Organic Consumers Association

A GMO ban also passed in the community of Humboldt County, California on Tuesday, marking the third county in California to pass such a prohibition. Efforts to mandate the labeling of GMOs faced a windfall in outside, industry spending in both Colorado in Oregon. In Colorado—where corporate contributions lead by Monsanto and DuPont Pioneer topped $16 million—the measure lost 66.78 to 33.22 percent.

Oregon Measure 92 also may have lost (this is not yet confirmed – on Friday it will be) by a slim margin, 50.5 to 49.5 percent. Multinational food and agriculture companies such as PepsiCo and Monsanto poured over $18 million into that race, shattering previous election spending records.

Organic food advocates say that the huge number of people who did back the labeling measures, despite industry-led misinformation campaigns, made it “clear that the GMO labeling movement is growing stronger with each of these initiatives.”

As Katherine Paul, communications coordinator for the Organic Consumers Association, told Common Dreams: “Change doesn’t happen overnight. But as we’ve seen with other movements (women’s right to vote, gay marriage) over time, the will of the people ultimately overcomes the opposition—even opponents like Monsanto that can, and do, spend millions to protect corporate power.”

“The science is on our side,” Paul continued, noting that in addition to the impacts from the countless toxic chemical combinations, GMO crops have also been linked to numerous chronic illnesses. “It’s only a matter of time before no amount of spending by Monsanto and Pepsi will be able to suppress the evidence against our industrial model of toxic monoculture crops.”