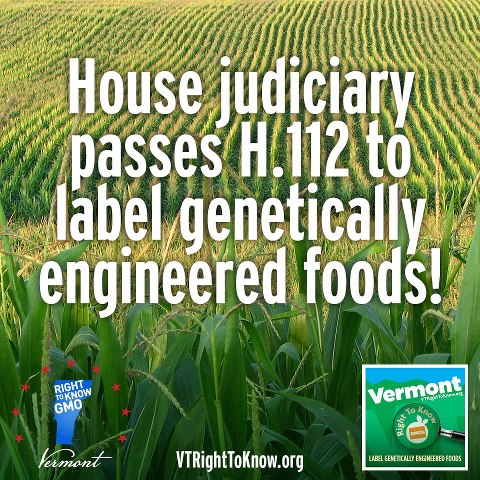 The measure isn’t expected to pass into law this year, because there isn’t enough time before the end of the session — scheduled this weekend — to get the bill through the Senate. If it passes the House, as expected, the Senate will likely take it up in January.

Rep. William Lippert, chairman of the Judiciary Committee, told his colleagues on Tuesday that the public interest in labeling is worth the risk of  attracting a lawsuit from the food or biotech industries.

Vermont is now on the road to becoming the first state in the U.S. to pass common sense GMO labeling legislation, they made a huge leap last year, passing a similar bill through the House Agriculture Committee.

Vermont Right to Know GMOs states on its website: “Big, out of state companies in the biotech and food producing industries are set on leaving GMOs unlabeled, and they’ll pay to prevent progress. Of course, what they have in money, we have in popular support. By taking action now, you can be part of the solution and help us guarantee your Right to Know what’s in the food you eat and feed your family.”

Meanwhile, in New Jersey the Assembly Health and Senior Services Committee on Monday debated legislation that would require labels on all genetically modified foods sold in the state, taking in testimony from biotechnology companies and from supporters advocating for consumer choice.

Committee members entertained a lively discussion on Assembly Bill A3192, which would require that every genetically modified food product that is offered for sale in New Jersey contain a label that is conspicuous and easily understandable to consumers indicating that they contain GMOs.