Three officials who had approved and conducted a controversial test of genetically modified (GM) rice on school children in central China’s Hunan Province had been sacked, authorities said on Thursday. 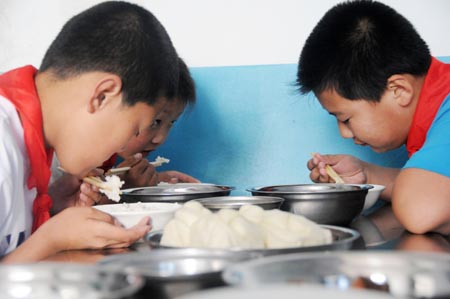 The officials were punished for “violating relevant regulations, scientific ethics and academic integrity,” according to a statement jointly released by Chinese Center for Disease Control and Prevention (China CDC), Zhejiang Academy of Medical Sciences, and Hunan provincial CDC.

The officials include Yin Shi’an from China CDC, Wang Yin from Zhejiang Academy of Medical Sciences and Hu Yuming from Hunan provincial CDC.

Earlier, the Ministry of Health ordered China CDC to investigate whether dozens of children in Hunan were used in 2008 as test subjects in a U.S.-China joint research project that included GM food Golden Rice.

Greenpeace broke the news on the controversial test in late August this year, saying that the joint research involved feeding Golden Rice, which is genetically modified to be rich in beta carotene, to 25 children aged between six and eight in Hunan.

It cited a paper published in the August edition of The American Journal of Clinical Nutrition.

The paper claimed that Golden Rice is effective in providing vitamin A to children.

The research, approved by the National Institutes of Health of the United States in December 2002, was led by Tang Guangwen, director of the Carotenoid and Health Laboratory of Tufts University in the United States. It was intended to explore ways in preventing deficiency of Vitamin A in children.

Tang conducted the research in cooperation with Yin Shi’an from China CDC and Wang Yin from Zhejiang Academy of Medical Sciences.

In 2008, the test was conducted on 80 pupils in Hengnan County of Hunan Province, with 25 of them being fed 60 grams of Golden Rice on June 2.

The research team had informed parents of the tested children about the experiment but withheld the truth that GM rice would be used.