For over 20 years in news story after news story they’ve been telling us that only GM can save the banana – and yet again, such claims turn out not to be true, a report by GMWatch recently stated. 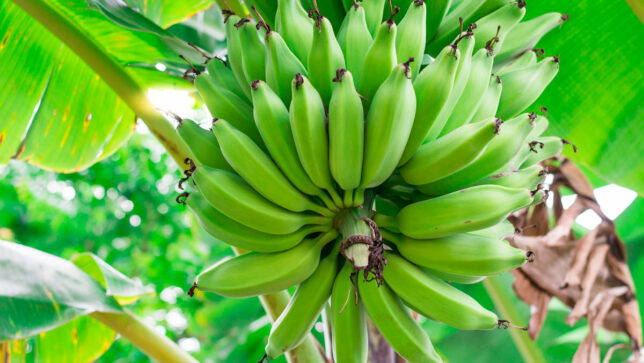 Edible bananas are sterile, they told us, and they can only be cloned, so if they’re very vulnerable to things like Panama disease you can’t give them resistance except via GM. But at the end of last week under the headline, This is how scientists are saving the world’s banana crop, the Telegraph reported that experts at Cambridge University have shown that different banana varieties can be grafted together to build in disease resistance and other traits to keep bananas healthy without any need for genetic modification.

Unlike genetic engineering, grafting has been in use since antiquity and is even mentioned in the Bible. It wasn’t thought to be usable with bananas but a novel approach has shown it is possible at a very early embryonic stage. That enables you to take a shoot from a vulnerable banana plant and place it on to the root of one that is resistant to the disease in question.

According to Professor Julian Hibberd of the University of Cambridge’s Department of Plant Science and senior author of the research published in the journal Nature, “We’ve achieved something that everyone said was impossible.”

Around 60,000 plant species, including food staples like rice, wheat and barley, are such monocots, which were previously thought to be impossible to graft. And as Dr Greg Reeves, who developed the technique and is the first author on the new paper, has pointed out, “Our technique allows us to add disease resistance, or other beneficial properties like salt-tolerance, to grass-like plants without resorting to genetic modification or lengthy breeding programmes.”

It’s particularly amusing to see this remarkable non-GMO breakthrough getting headline coverage in the Telegraph because in 2003 the same paper told us that without GM the Defenceless banana ‘will be extinct in 10 years’. In fairness, they were just one of many media outlets that churned out such claims. The Times, for instance, told us Bananas ‘will slip into extinction without GM’, while across the Atlantic the headline in the San Francisco Chronicle declared, Without a genetic fix, the banana may be history. In fact, so many such stories were generated between 2001, when New Scientist first reported this claim, and 2011 that we wrote a whole article debunking them.

At a considerably slower rate, such headlines have continued to do the rounds in the media ever since. More recently though, after GM had still not managed to “save” the banana, a wave of headlines with a new slant emerged. Amy Maxmen, for instance, wrote a piece in Nature telling us CRISPR might be the banana’s only hope, while other headlines assured us that CRISPR will save our bananas, or in the words of the industry’s Biotechnology Innovation Organisation, Bananas are on the brink of extinction. Gene editing can reverse that.

When, in contrast to all this continuing hyperbole, we flagged up the Cambridge scientists’ grafting breakthrough on Twitter, Dr Vandana Shiva commented, “Monocultures and genetic uniformity are at the root of all diseases that plague industrial crops. Industrial and globalised commodity production is a disease and sickness producing system – for the soil, plants and people. Non-industrial systems are based on biodiversity.”

And the fact that growing just one commercial variety of banana, the Cavendish, at a massive scale is simply unsustainable is exactly what the UN’s Food and Agriculture Organisation (FAO) flagged up when the first wave of claims that the banana would go extinct without GM broke in the media. Just Like Vandana Shiva, the FAO said the answer lay in promoting greater genetic diversity. The FAO also pointed out that small-scale farmers around the world grow a wide range of banana species which are less threatened than the Cavendish. There are, in fact, hundreds of different species of banana, and according to the FAO only 10 percent of the bananas produced and consumed globally are from the Cavendish, so bananas in general are not remotely on the verge of extinction.

Clearly we need resources to be targeted at encouraging greater biodiversity in our production systems alongside innovative non-GMO breeding, like that of the Cambridge grafters, and to get there we need to wean ourselves off the dead-end claims that we need GM to save us – by which they mean prop up the industrial monocultures at the root of so many of our agricultural and ecological crises.

For many more of the under-reported non-GMO breakthroughs solving exactly the kind of problems (drought-resistance, salt-resistance, biofortification, etc.) that GM proponents claim only genetic engineering can provide the answer to, check out the extensive catalogue of non-GMO successes on our website.

The University of Cambridge scientists have made an important and welcome proof-of-principle breakthrough and have proven in their research that bananas can be successfully grafted onto wild banana root material. But they have not yet come up with a grafted disease-resistant banana that is ready for commercialisation. That will be another step in their research. Also, the new technique is patented, raising the same worries about corporate control as apply to GM plants. Another concern is that the technique could conceivably be used to graft non-GM plant material onto GM rootstock, in order to profit from GMO patents.

In 2021 researchers announced that they had developed a GMO Panama disease-resistant Cavendish banana by introducing a gene from a wild banana, but there are no indications that this is close to commercialisation.

We speculate that they may be motivated by an aim to avoid the necessity to label the banana as GM, as they are now attempting to use the gene editing tool CRISPR to make a new line of ”new GM” bananas, which they are falsely claiming to be non-GM.

However, in our view, this is highly unlikely to work in the field, as lasting disease resistance is a genetically complex trait that involves many genes working together. This type of trait in wild bananas can be introduced into commercial bananas via the grafting method but is not amenable to GM techniques, including CRISPR gene editing, which can only manipulate one or a few genes.

Meanwhile, non-GMO breeders have already produced a banana resistant to the other major fungal threat to commercial banana production worldwide: Black Sigatoka disease. The new variety of banana, named the Pointe d’Or, can be produced using organic and agroecological production methods and is set to become commercially available in France. You can read about it here and here.