Until the drought, water engineers at the Des Moines Water Works had to make a difficult choice every morning between two rivers that supply the 600,000 people in Iowa’s capital city with clean drinking water. 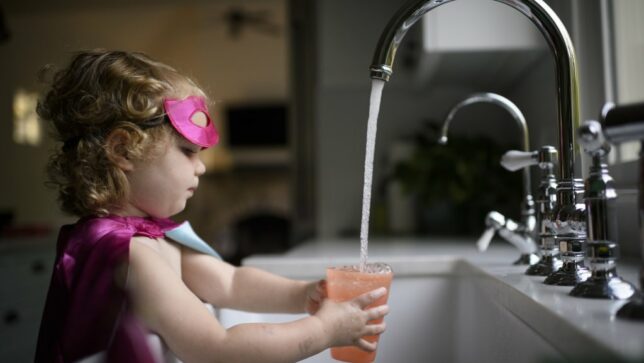 Would it be the Raccoon River, flowing from the northwest and often laced with levels of nitrates in excess of federal safety standards, or the Des Moines River, flowing from the north and often carrying dangerous concentrations of cyano-bacteria in burgeoning populations of algae? It’s a no-win choice: Extended exposure to nitrates in drinking water has been linked to a range of cancers, the consumption of algae to kidney and liver damage and an array of acute symptoms.

This story was jointly produced by Public Health Watch and the Investigative Reporting Workshop.

But there’s been a twist to this unappealing choice, some version of which is playing out in cities across the Midwest that lie astride major rivers. For much of the fall, the drought in Iowa made the decision easy for Ted Corrigan, a water engineer and CEO of the Des Moines Water Works. Less rain meant less nitrogen seeping from the fertilizer applied across the state’s millions of acres of farmland and running off the tiles that undergird many fields into the Raccoon. Since early September, Des Moines has been drawing from the Raccoon because the concentration of nitrates in it is way down, meaning Corrigan doesn’t have to switch on the city’s multimillion-dollar filtration system, the only way to keep the toxins within a safe range. That’s largely because the Raccoon’s water levels, as of June, were barely 10% of the average for that time of year over the past quarter-century. In some areas, Corrigan says, the river “was so low you could jump across it.”

In Iowa, drought, devastating to farmers, is intertwined with the flow of nitrogen, devastating to ecosystems and human health. You can monitor the effects of drought by tracking the nitrogen. From 2014 to 2018 the average level in the Raccoon River exceeded the EPA’s limit of 10 milligrams per liter, or 10 parts per million, every year. Then, in July 2020, the drought took hold and the nitrogen levels dropped below 3 ppm every month until October of this year, according to water works records.

In other words, the drought is bad for farmers, but good for those who live downstream from them. For a while.

The drought lifted on Oct. 23, when just one week of intense rains — two inches above the monthly average — catapulted that month into the sixth-wettest in the 148 years that records have been kept in Iowa. The water started flowing again, and so did the nitrogen. According to DMWW records, nitrogen concentration went from below 2 ppm from April to mid-October, then practically tripled to 5.5 in November after the record-breaking rains.

Corrigan and other water experts in the region now fear what’s on the other side of rainstorms to come: the return of a flood of nitrates to the water. Drought is one symptom of climate change. Another is disturbance to the moisture balance in the atmosphere, as more rain falls in torrents rather than over a season. In Iowa, the intensity of precipitation increased by more than 15% from 1986 to 2015 when compared to 1901 to 1960, according to the most recent National Climate Assessment. The rain hits harder, which means it reaches deeper into the sub-surface to upend pockets of nitrogen-rich fertilizers that have built up over decades.

Read More of This Article on Public Health Watch Here