As the Food and Agriculture Organization (FAO) Conference convened its 42nd Session on Monday, Pesticide Action Network Asia Pacific (PANAP) called on the FAO to review its desert locust program and stop the use of chlorpyrifos, a pesticide linked to brain damage and other neurodevelopmental disorders in children. 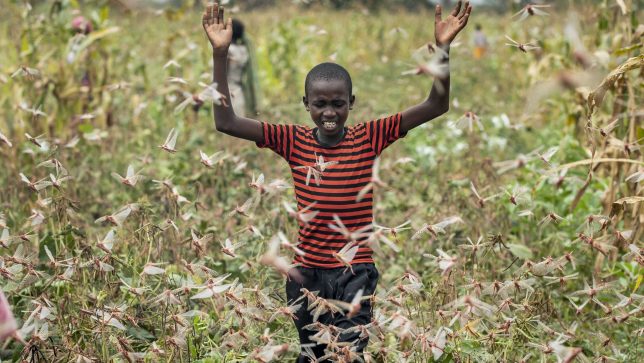 An overview of the FAO desert locust response shows the use of several Highly Hazardous Pesticides (HHPs), including chlorpyrifos. According to data available on the FAO’s website, more than half a million liters of chlorpyrifos was purchased and delivered by the FAO for desert locust control in Ethiopia (490,000 liters), Uganda (47,000 liters), Yemen (5,000 liters) and Sudan (4,800 liters).

Overall, both the FAO and governments have used around two million liters of pesticides in desert locust affected countries since January 2020, almost half of which (879,456 liters) is chlorpyrifos.

Chlorpyrifos, an organophosphate pesticide, is a potent neurotoxin at low levels of exposure, causing delayed cognitive and motor development, reduced IQ, and attention deficit/hyperactivity disorder (ADHD). It is associated with several cancers and causes birth defects. It is also extremely toxic to fish, birds, bees and other beneficial insects.

In addition, on April 7th this year, the Council of the European Union decided to submit a proposal to the secretariat of the Stockholm Convention on Persistent Organic Pollutants (POPs) for the listing of chlorpyrifos under Annex A of the Convention, for global phase-out of its production and use. POPs are chemicals that travel long distances to cold regions of the world, particularly the Arctic and Antarctic, where they persist in the environment, bioaccumulate in the food chain and, through their toxicity, threaten both wildlife and humans. “Peristent Organic Pollutants are particularly prone to evaporating from warm regions of the world, so it is highly likely that some of the chlorpyrifos sprayed in Africa will find its way to the Inuit children living in the Arctic,” said Dr. Meriel Watts, PANAP director of science and policy.

As part of its campaign to Protect Our Children from Toxic Pesticides, PANAP is calling for a global ban on chlorpyrifos. Chlorpyrifos is currently banned in 35 countries, according to PAN’s latest consolidated list of banned pesticides.

Other HHPs used in the FAO’s desert locust response program are malathion, deltamethrin, and fenitrothion. Clorpyrifos, malathion (banned in 32 countries) and deltamethrin are also among PANAP’s Terrible 20 pesticides that are especially toxic to children.

The FAO’s Practical guidelines on pesticide risk reduction for locust control recommends a minimum buffer distance for “ecologically sensitive areas” (1,500 meters or about one mile when aerially sprayed, and 100 meters or about 330 feet when sprayed on foot). It instructs locust control staff to wear appropriate personal protective equipment, and to tell local populations to “follow precautionary measures” before control operations.

However, environmental groups have reported that communities in Kenya were not given timely warning before spraying. Pesticide drift from aerial spraying can also reach several miles and cause extensive poisoning of village inhabitants and the surrounding ecosystem.

The FAO’s Pesticide Referee Group recommends organophosphate pesticides as a “last resort” method in locust control. But the FAO insists that the current emergency status of the desert locust crisis warrants the use of these pesticides as “the most appropriate tool.”

“The FAO’s path of choosing to use Highly Hazardous Pesticides, including potential POPs, for desert locust control when more agroecological alternatives are available is alarming. It may have disastrous outcomes for succeeding generations. It should be noted that the use of these toxic pesticides occurs at a time when the UN agency has forged a controversial partnership with CropLife International, the industry association of the world’s biggest pesticide manufacturers,” Watts added.

Hundreds of civil society organisations and scientists around the world are calling on the FAO to stop its deepening collaboration with CropLife, raising concerns that it ties the FAO with manufacturers of harmful pesticides and unsustainable technologies.  PANAP is co-coordinating the global campaign to stop this #ToxicAlliance.