“Gene-silencing pesticides” now under development pose unique risks to surrounding ecosystems and beneficial insects, including bees, according to a new report, released today by Friends of the Earth and Dr. Eva Sirinathsinghji. The report summarizes the gaps in research on experimental gene-silencing pesticides and the risks they pose to human health, the environment, and farmers. 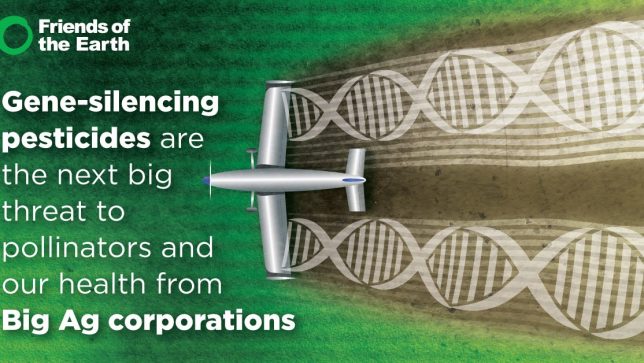 Several biotech and agrichemical companies are moving quickly to patent and bring gene-silencing pesticides to market. Corporations including Bayer, and Syngenta, are using genetic engineering to develop the new pesticide sprays that exploit a cellular process called RNA interference (RNAi), in order to switch off or “silence” genes that are essential for the survival of insects — thus killing them.

The first gene-silencing pesticide spray is slated to be submitted to the U.S. EPA for registration by the end of this year. The product, developed by GreenLight Biosciences, targets the Colorado potato beetle. The spray is designed to be applied to crop leaves. When a beetle eats the contaminated leaves, genetic material enters the cells of its body and silences a gene that is essential for healthy cell functioning, causing the beetle’s death.

“This open-air experiment poses a serious and unacceptable risk to our planet’s collapsing insect populations, particularly the pollinators essential to our food system and functional ecosystems,” said Dana Perls, food and technology program manager at Friends of the Earth. “There is no regulatory framework for responsibly assessing gene silencing pesticides, and huge gaps exist in our understanding of their possible impacts. Mounting evidence shows that these pesticides could harm ecosystems and human health, particularly farmworkers, farmers and rural communities.”

Recent studies suggest that RNAi genetic modification can last multiple generations. It is also imprecise — RNAi technology is widely associated with off-target impacts within the genomes of target organisms. Sprays may be applied to entire fields of crops, with the potential to harm thousands of non-target insects and drift to surrounding farms, communities and ecosystems. Research shows the potential for RNAi pesticides to target genetic sequences that are not an exact match for the targeted gene, potentially impacting an unknown number of non-target species, including beneficial insects like bees. A recent global metastudy found that 40 percent of insects are facing extinction and could disappear within a century due largely to industrial agriculture and heavy use of pesticides, threatening a “catastrophic collapse of nature’s ecosystems.”

Biotech and agrichemical corporations are filing patents for RNAi pesticide products that include claims of property rights to exposed organisms and their offspring. This could constitute a massive expansion of property rights over nature, further entrenching the power of biotech and agrichemical corporations over the food system, farmers, and the natural world itself.

“Gene-silencing sprays raise new concerns and challenges for risk assessment. While engineered crops can, at least in theory, be assessed in laboratories for certain unintended effects prior to cultivation, these RNA sprays would be applied to entire fields,” said Dr. Eva Sirinathsinghji, co-author of the report. “This opens the door for any exposed organism to potentially be genetically modified directly in the field, without any prior risk assessment. Such uses also have implications for property rights, with companies filing patents for products that include claims of property rights to exposed organisms and their offspring.”

The report covers more than two decades of research and dozens of studies and highlights serious warnings from scientists about the environmental and health risks of this new genetic modification application, as well as extensive gaps in knowledge. Examples include:

Based on the latest science, RNAi pesticides should fall within the scope of government regulatory oversight of genetic engineering and GMOs, using the Precautionary Principle to protect human health and the environment. Oversight and regulations for interfering RNA applications should include independent, transparent health and environmental assessment, including examination of potential long-term impacts, before being allowed to enter the market or environment, and products of all genetic modification should be traceable, and labeled as GMOs.