Categorized as
3349
Tagged as
BayerChilegmos
Related

In Chile, the largest seed exporter in the southern hemisphere, Bayer is expanding the GM seed production factories of its subsidiary Monsanto 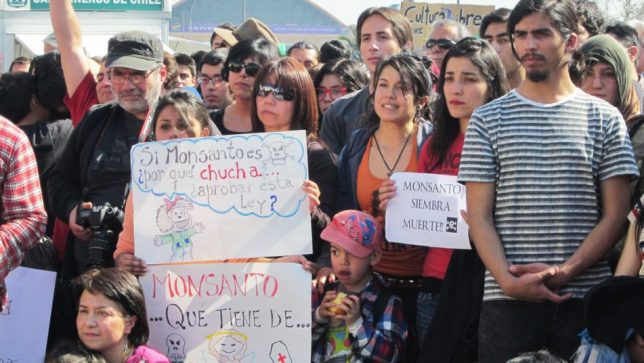 Following is an English translation of an article from the German newspaper Deutsche Welle (DW), translated by Google/GMWatch from a Spanish version circulated by Network for a Latin America Free of Transgenics (RALLT).

“Bayer-Monsanto: Get Out of Chile”, was the slogan on banners in Santiago on May 19 during the “March against Monsanto” protest, which took place in 30 cities around the world for an agriculture without pesticides and against the use of genetically modified seeds.

Just a few days earlier, the Bayer pharmaceutical consortium had been ordered to pay more than $2 billion to a couple in the United States who claimed to have had cancer due to the use of Roundup, a herbicide developed by Bayer’s subsidiary, Monsanto.

About 50 kilometers south of Santiago are two of the largest seed production plants in Chile. In September 2018, after the purchase of Monsanto, Bayer CropScience announced the modernization of the Viluco plant, the only factory that produces vegetable seeds in South America and one of the company’s three largest factories worldwide.

“We want to modernize the technology and processes, so that the factory reaches the standards of the factories in the Netherlands and the United States,” said Yuri Charme of Bayer CropScience. The project, called “Satisfaction of demand”, aims to increase seed production by 20% so that Chile can meet 70% of demand in the region in the near future.

Chile is the largest seed exporter in the southern hemisphere. According to figures from the Federation of Seed Producers (ChileBio), the country exported seeds worth $338.5 million in 2016/2017, a fifth of which were GM. One of the advantages of having a seed business in Chile is that when it is winter in Europe, there it is summer.

The vegetable seed that is processed at the factory in Viluco represents, so far, a small part of the seed exports. Far more important are corn, soybeans and rapeseed. These are processed in another factory, a few kilometers south of Viluco, in the rural community of Paine. There, the majority of the population subsists from agriculture. Already in 2016, before the merger with Bayer, Monsanto had announced the expansion of the factory, which led a group of citizens to found the Paine Defence Committee.

“The largest seed processing plant in Latin America is being built here. There are no studies on its environmental impact. Politicians approved the project without consulting people’s opinions,” says Camila Olavarría, spokesman for the committee. The inhabitants of Paine fear the contamination of local seeds by cross-pollination when pollen from modified plant fields is transported by wind to neighboring fields. This is particularly easy with rapeseed, because its pollen flies up to three kilometers.

“Most of the seeds here have been genetically modified”

In EU countries, the cultivation of genetically modified rapeseed is prohibited. In Chile, however, cultivation is allowed for research and export purposes. The only way to avoid cross-pollination would be a sufficient distance between crops. This prevention measure is not implemented in Chile.

Olavarría believes that the seeds in Paine are already contaminated: “Most of the seeds here have been genetically modified. Bayer-Monsanto gives local farmers seeds that they sow on their land. They then have to return some seeds that are then processed in Paine and Viluco and exported,” he explains. And he adds that “farmers receive the seeds along with a package of pesticide products like Roundup”.

“There are more and more cancer diagnoses”

Roundup, the brand name of glyphosate, is the best selling herbicide in Chile. In March 2015, the International Agency for Research on Cancer classified glyphosate as a “probable carcinogen”. Camila Navarro, also a member of the Paine Defense Committee, points out that in her community “the number of people with cancer is growing, not only among farmers, but also among seasonal farmworkers and people close to the fields.”

He points out that the children of seasonal farmworkers frequently suffer from speech defects and cognitive disorders. He adds that there are also reports about pregnant women who work in the fields, and who suffer miscarriages or whose babies are born with fatal malformations. There are no official studies on the relationship between pesticides and these diseases.

Action network calls for ban on glyphosate in Chile

Cancer is the second most common cause of death in Chile. Each year, there are 45,000 new cases, according to the Chilean Ministry of Health earlier this year. A network for action against pesticides calls for a ban on glyphosate in Chile. Lucia Sepúlveda, one of its members, told DW that “Bayer and Monsanto are not welcome in Chile,” and concludes that the cultivation of genetically modified plants and pesticides “damages the environment and the health of the population.”