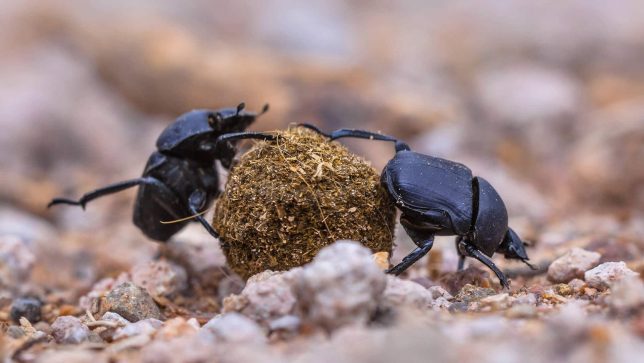 While these natural systems suppress pathogens on organic farms, coventional chemical-intensive farms are left with higher levels of fecal residues and are therefore significantly more likely to yield produce carrying such foodborne pathogens as E. coli. The authors emphasize that curbing the spread of common foodborne pathogens could save thousands of lives and prevent millions of illnesses each year.

Results from field analyses show that organic management practices lead to greater biodiversity among dung beetles and soil microbes, which translate to higher rates of feces removal. Microcosm results confirm that by removing fecal matter, the beetles and microbes retained by organic management reduce potential E. coli contamination. These new findings add to the list of ecosystem services unique to organic farms, further bolstering the case for organic as not only an ecological but an economical solution to global food production.

In the context of recently reviewed insect declines worldwide, this study also serves as a warning of yet another key ecosystem service that will certainly be lost unless a major agricultural transformation to organic systems is mobilized. Dung beetles, whose actions in soils not only protect against pathogens, but also unlock critical nutrients, are in decline. The impacts of dung beetles on soil fertility are vital to the sustainability of farms and pastures used to maintain livestock. By burying and processing feces on cattle farms, dung beetles introduce 80% more nitrogen into the soil than would otherwise remain. By increasing soil organic matter, dung beetles simultaneously increase water infiltration, thus stabilizing farms and heavily grazed areas against erosion, flooding, and drought.

Findings from the present study highlight the need for dung beetle diversity in addition to abundance, since some dung beetles bury feces more effectively than others. Notably, researchers find that the commonly introduced species O. nuchicornis, which tends to dominate over other species and reduce overall diversity, is less effective at burying feces, with consequences for both E. coli contamination and soil fertility. Similarly, previous work attests to the importance of soil microbial diversity for maintaining ecosystem services. The key to healthy produce and fertile soils, across the board, is diversity.

Due to agrochemical use, that precious diversity is in decline. Monitoring in Europe, according to the 2019 review of insect declines, shows the greatest terrestrial loss of insect biodiversity on record to date: more than 60% of documented dung beetle species are in decline. Soil microbial diversity, too, is threatened by continued application of pesticides in industrialized agriculture. Highly toxic gases known as “soil fumigants” are used on a wide range of high-value crops to control nematodes, fungi, bacteria, insects, and weeds. Soil fumigants wipe out entire soil communities, thus necessitating the use of other chemicals  to provide the fertility and pest control services that soil  organisms provide. In addition to fumigating soil, which intentionally kills all  living things in the soil, other chemical-intensive practices also threaten soil  life. Glyphosate, the most widely used herbicide, is also an antibiotic. Glyphosate-tolerant plants release glyphosate into the soil, where it has a continued impact on soil microbial diversity.

Beyond Pesticides holds the position that these patterns carry a lesson. Insects and microbes that act to control crop pests and fertilize the soil reduce the need for pesticide and chemical fertilizer use. Reliance on chemical controls creates a vicious treadmill: pesticide use kills natural agents of pest control, thus creating a demand for more pesticide use, which kills more of the beneficial organisms, and so on.

Join Beyond Pesticides in getting off the toxic treadmill and instead working to build a sustainable food system based on natural control systems. Be a model for your community by creating a pesticide-free zone in your home yard, neighborhood, or even jurisdiction. Add your pesticide free zone to the map by taking our Pesticide Free Zones Survey. Show your neighbors and beyond that a world free of pesticides is both desirable and achievable.

All unattributed positions and opinions in this piece are those of Beyond Pesticides.