A peer-reviewed article on GMO Bt brinjal in Bangladesh is claimed to prove its success. Claire Robinson from GMWatch looks at the evidence. 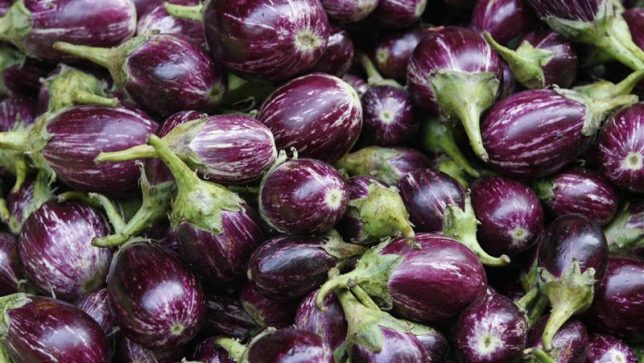 In past years, GMWatch has published many reports from within Bangladesh saying that GM Bt brinjal (eggplant) has suffered widespread failure.

But a tweet by GMO and pesticide-promoting writer Tamar Haspel links to a new peer-reviewed article[1] that claims dramatic benefits from the crop.

The article is published in the online journal Frontiers in Bioengineering and Biotechnology as a “Perspective Article” and the lead author is Cornell’s Tony Shelton, who has led the propaganda effort for Bt brinjal in Bangladesh. The GM “event” featured in the article is called EE-1. The GM gene inserted into the brinjal codes for a Bt toxin insecticide targeting a pest called the eggplant fruit and shoot borer (EFSB).

“Bt brinjal (eggplant) in Bangladesh is an unequivocal #GMO win.
– Drastically increases yields
– Drastically cuts pesticide use
– Increases farm profitability
– Helps some of the poorest
Developed by an Indian company. Seeds can be saved.”

I’ve often complained about the lack of peer-reviewed published data on Bt brinjal to back up the years of hype emanating from the likes of the Alliance for Science and its employee Mark Lynas.

Have those data finally been produced? And is the glowing picture that’s painted of Bt brinjal’s success reliable?

A closer look at the new study gives the answer: No. What is more, the elliptical approach and apparently calculated omissions of the article appear to confirm, rather than refute, the reports from Bangladesh to the effect that Bt brinjal isn’t working for anyone apart from the GMO lobby.

First and foremost, it’s surprising, given the massive interest in hard data on what is supposed to be the first commercialised “humanitarian” GM crop, that the authors chose instead to announce Bt brinjal’s commercial debut with what is little more than a data-free puff piece.

Now, there’s nothing wrong with “Perspective Articles” – last year I co-published just such an article in Frontiers in Public Health with Dr Michael Antoniou, in which we criticized the Cornell Alliance for Science’s “citizen science” initiative to evaluate studies on health risks of GM crops and foods.[2] But such articles represent a viewpoint on a topic – they don’t have to contain hard data. Bt brinjal has been trialled since 2005 and planted in Bangladesh since 2013. This is more than enough time to amass some proper data on yield, insecticide use, and other aspects of the project. So why didn’t the authors publish some, in a Frontiers “Original Research” article?

Granted, the authors note in the Acknowledgements that “This paper includes unpublished results of studies in Bangladesh that will soon be submitted to peer-reviewed journals.” But that just begs the question: Why not start by publishing the data, rather than the puff piece?

The one piece of data that is included in the paper is the large number of farmers (27,012) who allegedly “adopted” Bt brinjal in 2018. But this is not a sign that farmers were eager to plant Bt brinjal off their own initiative. It is only a sign that some entity (who?) has paid the Bangladeshi government to give seeds and accompanying chemicals to farmers.

You may ask: if the article is as data-free as it seems, what enables Haspel to make such inflated claims for Bt brinjal? Let’s address them one by one.

No yield data are given in Shelton and colleagues’ article. The authors almost seem as if they are trying to avoid the topic. They only state, rather cryptically, that “Inclusion of the EE1 event in a hybrid background would further increase the yield potential of Bt eggplant.” This suggests that the yield is not impressive and still needs to be improved.

No evidence for this statement is given in Shelton and colleagues’ article. The authors only state that with regard to insecticide use, “maximum fruit yield was obtained from sprayed plots compared to non-sprayed plots, indicating that other insects including whiteflies, thrips and mites can reduce plant vigor and subsequent fruit weight”.

This confirms years’ worth of reports from Bangladesh that Bt brinjal has fallen victim to attacks from pests not targeted by the Bt toxin in the plant, including whitefly and aphids, as well as various diseases.

The Bangladesh-based NGO and research platform UBINIG found that farmers enrolled in the Bt brinjal programme were told to spray “huge amounts of pesticides recommended by the supervising authorities” of the government’s Bangladesh Agricultural Research Institute (BARI) and its Department of Agricultural Extension (DAE). The roster of pesticides used on Bt brinjal even included some banned ones.

UBINIG said, “Thirty-five types of pesticides, including acaricide [kills ticks and mites], insecticide, and fungicide, were sprayed several times in the Bt brinjal fields” on the direction of the supervising officials.

Shelton and colleagues’ article claims that “farmers saved 61% of the pesticide cost compared to non-Bt brinjal farmers” and “experienced no losses due to EFSB”.

However, given that the Bt brinjal project has been closely supervised and the crops nannied through their lives by officials from BARI and the DAE, it seems possible that the farmers didn’t even have to buy the pesticides used but were simply given them along with the seeds. The article does not make this clear.

And the claim that there were “no losses due to EFSB” continues the lie of omission that has been at the centre of Bt brinjal hype from the start. What use is protection from the EFSB if, as reports from farmers indicate, this GM crop is susceptible to so many other pests and diseases?

In an investigation by the Financial Express of Bangladesh in 2014, a reporter visited the field of a farmer growing Bt brinjal and found “25-30 per cent of the plants dead and the rest… struggling for survival under a severe pest attack”. The farmer said that “his field now required more pesticides compared to that of last year” (when he grew non-GM brinjal). Other farmers visited by the reporter had similar experiences.

Dr Jonathan Latham, executive director of the Bioscience Resource Project, attended a talk at Cornell about the Bt brinjal project by Dr A.S.M. Mahbubur Rahman Khan of BARI. According to Dr Latham, Dr Rahman Khan said the crops still need pesticide since jassids and whiteflies become problems when you stop spraying, but added that they need less of it.

Diseases are also a problem. Dr Latham said that in Dr Rahman Khan’s talk, “There were suggestions that the Bt eggplant was susceptible to fungal pathogens and that farmers would have to take special steps to grow it. The pathogens mentioned were Phomopsis blight and little leaf, and bacterial wilt. Special steps include having nets over the crop.”

Dr Latham said, “These subtleties seem, at least in BARI’s opinion, to be a bit beyond the farmers, so they plan to nurture the crops in the roll-out phase. It seemed as if they were going to roll out a special management plan that would support the crop. They see its ‘success’ as eventually leading to adoption elsewhere, especially the Philippines.”

An article in Bangladesh’s Dhaka Tribune from 2017 confirmed that the government was set to “incentivise” farmers to grow Bt brinjal via just such a subsidised programme: “According to the plan, the Ministry of Agriculture will provide seeds and fertilisers among 2001 farmers in 64 districts to cultivate Bt brinjal on 2001 bighas (667 acres) of land next season.

“As an incentive, each farmer will receive 20 grams of seed and 15 kilograms of DAP [di-ammonium phosphate] and MoP [muriate of potash] fertilisers, at a total cost to the government of Tk1,630,800.”

A similar subsidised plan in Makhatini, South Africa enabled the introduction of GM Bt cotton. But the subsidies were not maintained. The project ended up failing miserably, with heavily indebted farmers losing vital skills in growing more sustainable crops.

Given Shelton and colleagues’ disingenuous omission of the Bangladesh government “incentives” to farmers, there appears to be no basis for claims that Bt brinjal increases farm profitability.

Moreover, Bangladesh government intervention in the project appears to go beyond financial “incentives”. It extends to almost total management of the crop in farmers’ fields.

In the documentary film about the project, “Bt brinjal In the Dock”, a farmer who complains about the poor performance of the crop calls it “government brinjal”, implying that he felt no ownership.

In 2015 UBINIG researchers found that the GM Bt brinjal crops were being nannied through their short lives by officials from BARI and the DAE. UBINIG said, “During the field cultivation the farmers were extensively supervised by BARI and DAE officials. The DAE officials… visited daily or at least weekly and supervised the growth of the plants.”

UBINIG added, “According to the farmers, most of the time, the officials took care of the plants themselves as they had to show a good performance.”

According to UBINIG’s investigation, the officials even replaced failing plants with new ones. Any published papers from proponents of Bt brinjal must address this allegation, which, if accurate, would alone invalidate any claims of the crop’s success.

Claim no 4: Bt brinjal “Helps some of the poorest”

In the absence of any evidence that Bt brinjal has succeeded on its own merits and without extensive government and other support, as noted above, there is also no evidence that any poor farmers have been helped by the project. And the following section suggests they may end up being harmed by it.

Claim no 5: Bt brinjal is “developed by an Indian company. Seeds can be saved”

As an article in the Financial Express newspaper makes clear, the “company” that developed Bt brinjal is, more precisely, “Multinational seed giant Monsanto and its Indian ally Mahyco, with the financial assistance of the USAID”.

A 2014 article in the Financial Express quoted an anonymous official at the ministry of agriculture (MoA) as stating that Mahyco still owned Bt brinjal. He said that an agreement had been reached between the Bangladesh Agricultural Research Institute (BARI), Mahyco and Sathguru, an India-based management consultancy, that “the IP (intellectual property) right of the Bt brinjal is surely of Monsanto-Mahyco’s”.

Revealingly, the MoA official added, “The most striking point of the agreement is that it has given an indemnity or BARI has given indemnity to Monsanto-Mahyco and Sathguru for any kind of disaster concerning Bt brinjal research.”

The article quoted the director-general of BARI as saying that “the right of the seed developed by the institute will be of BARI’s, but the Bt gene and the technology will be of Mahyco’s”.

He admitted that “Under the agreement BARI has to take permission from Mahyco if it wants to infuse Bt gene to new varieties.”

Zobair Al Mahmud, intellectual property rights expert and lecturer in clinical pharmacy and pharmacology at Dhaka University, pointed out a serious problem with Mahyco’s “sole right” over Bt brinjal: it actually deprives farmers of the rights to indigenous brinjals: “Nine indigenous varieties of Bangladeshi brinjals, which were infused with Bt gene by BARI, will be out of the farmers’ reach. It is surely a kind of bio-piracy.”

Whether or not under this patent regime seeds containing the Bt trait “can be saved”, as Haspel claims, is up to Mahyco. However, Shelton and colleagues state in their paper that farmers are being “discouraged from doing so for agronomic reasons”. This presumably means that GM Bt brinjals will not breed true to the parent – unlike traditional non-GM brinjals, where seed can be saved. Thus as well as depriving farmers of their rights to traditional varieties of brinjal, the genetic engineering of these plants will destroy their genetic integrity, along with the farmer-developed useful traits that they embody.

In conclusion, Shelton and colleagues’ article raises more questions than it answers and provides no evidence that GM Bt brinjal is succeeding in Bangladesh or has helped a single poor farmer. And Haspel’s “unequivocal GMO win” looks set to be just another unequivocal GMO deception.