A variety of bentgrass, genetically engineered by Scotts Miracle-Gro and Monsanto to tolerate the glyphosate herbicide Roundup, escaped from an experimental field planting in Eastern Oregon 15 years ago, and continues to plague area farmers. 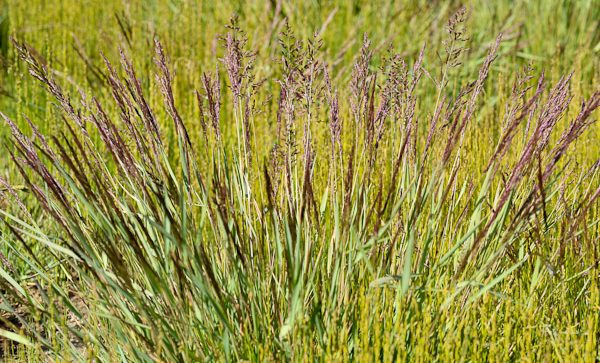 Bentgrass is prized by those who maintain golf course greens because of its fine texture and habit of spreading in even, horizontal mats. But the genetically engineered (GE) version has become a giant annoyance for farmers and other growers who battle its spread through the irrigation systems of Malheur County in eastern Oregon. The escape of this GE version of Agrostis stolonifera is especially alarming in Oregon, the grass seed capital of the world.

The GE grass showed up after crossing the Snake River from where it had been planted in seed fields in Idaho, despite the fact that the USDA had not approved its release into the seed market. By 2010, farmers and others found it spreading in mats across most of the irrigation canals and ditches that snake across Malheur County. It is now found in Jefferson County, Oregon, and Canyon County, Idaho, as well.

The growth habit of the perennial grass is what greenskeepers love, but its persistent presence in irrigation networks results in slowed water flow as the plant roots collect sediment, creating a constant trial for farmers who depend on irrigation. They use herbicides and mechanical removal to try to get rid of it, but efforts cost time and money, and are only partly successful.

This GE bentgrass episode is but one example of the concerns that many scientists, environmentalists, and advocates have not only for the use of GE organisms in agriculture, but also, for the cascading risks it introduces. Most notable among those is increased use of pesticides and the related development of resistant “superweeds,” akin to the issue of rising antibiotic-resistance among bacteria. The biotechnology enthusiasm in the 1990s and 2000s for what genetic engineering could do in agriculture — never mind for corporate profits — included claims that, for example, plants engineered to be resistant to certain pesticides or herbicides would mean that growers would need to use far less of the toxic stuff on crops.

In fact, a large-scale study published in 2016 showed that, although pesticide use on GE crops dropped in the very short term, as resistance quickly developed among target weed species, growers actually accelerated their herbicide use and added additional compounds, such as dicamba and 2,4-D, in an effort to control the “super weeds.” Chuck Benbrook, PhD (author of a previous study on pesticide use on GM crops, covered in 2012 by Beyond Pesticides), noted, ““When measured by acre-treatments (number of distinct, single applications of any pesticide), the trends look very ominous for farmers and the environment.”

The resistance problem has real potential to impact the economics of agriculture, as well. Beyond Pesticides noted in 2012, “Glyphosate-tolerant weeds were practically unknown before the introduction of Roundup-tolerant crops in 1996. But heavy reliance on the herbicide Roundup, whose active ingredient is glyphosate, has placed weed populations under progressively intense and unprecedented selection pressure, triggering a perfect storm for the emergence of glyphosate-resistant weeds. In general, in regions of the U.S. where Roundup-tolerant crops dominate, there are now evolved glyphosate-resistant populations of economically damaging weed species.”

In addition, genes from the ultra-light pollen of bentgrass can travel on wind currents. As far back as 2005, the U.S. Forest Service (USFS) expressed concern that the GE grass could not only spread herbicide resistance, but also, infect and fundamentally alter rare or native species with unfamiliar genes. Because varieties of bentgrass grow naturally across the North American continent, this GE species might easily spread and crossbreed with other grass species and/or exhibit glyphosate resistance.

These concerns are very real for Oregon’s billion-dollar grass seed industry, located largely in the Willamette Valley in the western part of the state. Though the problem has not yet migrated from eastern and central Oregon to that fecund valley, some growers think it may be only a matter of time. Were that to happen, it could both destroy the export grass seed market — because many overseas buyers will not purchase GE commodities or products — and make it monumentally challenging for growers to control the GE or hybrid plant contamination.

This points to one of the fundamental problems with GE plant organisms: once introduced into the environment, they can easily spiral out of control and contaminate other species with their genes and/or other features, such as Roundup resistance. Critics note that the government, through its various agencies (Environmental Protection Agency, USDA, et al.) continues to fail to protect both the general environment, and agriculture, specifically. Jennifer Kuzma, co-director of the Genetic Engineering and Society Center at North Carolina State University, said,“Neither the USDA nor any government agency must weigh the full social, economic and ecological impacts of GE products. . . . There’s really no place that’s looking at this broadly from a risk-benefit perspective.”

Malheur County locals do not think the GE bentgrass can be eradicated, and some fear that it may contaminate non-GMO crops and potentially invade natural areas. Jerry Erstrom, a retired Bureau of Land Management (BLM) natural resource specialist who chairs the Malheur County Weed Advisory Board, has lived his whole life in the county. When he led BLM’s regional weed program, his unofficial moniker was “Weed Czar.” His comment on bentgrass: “It just scares the bejeezus out of me.” He adds, “There are only one or two herbicides labeled to be used upon it. . . . The caveat is they can only be used in dry areas. Anything on a shoreline, in wetlands or along riparian, there’s nothing that can remove it. The only way is by hand or shovel.”

Scotts and Monsanto started work on the grass in the 1990s, looking to exploit a specific commercial niche: maintaining golf course greens. With a Roundup-resistant, GE version of the grass, greenskeepers would be able to plant the bentgrass, and use Roundup on it to beat back other grasses and weeds, leaving the bentgrass to thrive. After initial field trials, the companies petitioned the USDA’s Animal and Plant Health Inspection Service (APHIS) to deregulate — release from regulatory oversight — the new grass. Field trials continued, including one just north of Bend, in central Oregon and less than 100 miles from the Willamette Valley. A couple of windstorms in 2003 carried pollen far out of the “controlled” area of the field trial, and Roundup resistant pollen fertilized non-GMO bentgrass plants as far away as 13 miles.

With the horse out of the barn, USFS wrote, “The deregulation of this organism has the potential to adversely impact all 175 national forests and grasslands.” In 2007, Scotts paid a half-million-dollar fine for losing control of the organism, but that did little to rein in what had been loosed.

When landowners in Malheur County started noticing that Roundup no longer took down what they thought was regular bentgrass in their irrigation canals and ditches, they sought the plants’ genetic identity and discovered that the stuff filling their waterways was, indeed, the Roundup-resistant bentgrass. They discovered it could be kept down, more or less, during fall and spring, but in summer, the ditches swelled with new growth and pollen-laden flowers. And the only permitted use near water was . . . wait for it . . . Roundup.

Scotts has made some efforts to deal with the problem of its GE “escapee,” and says it has significantly reduced the territory of the grass’s proliferation. Yet the company has been allowed to escape ultimate responsibility by a number of USDA (United States Dairy Association) decisions in recent years that absolve Scotts and Monsanto from the responsibility to fund clean-up efforts (to the tune of $250,000 annually) in exchange for an agreement not to commercialize GE bentgrass. This, according to Mr. Erstrom, leaves the burden of annual routing of the plant to county and state governments, and to local growers.

Scotts and Monsanto abandoned plans to commercialize the grass, but quietly reapplied for deregulation. Oddly, USDA proposed this: “If the company promised not to sell the grass for the life of the patent and continued control efforts for three more years, APHIS would absolve Scotts of responsibility for controlling the plants. The company would have to maintain an educational website and provide technical support for managing the grass until 2023, including if it cropped up in a new location or in someone’s harvest. But it would not have to pay for cleanup.” An APHIS spokesperson characterized the offer as a way to protect farmers and get the company’s cooperation, given that under current regulations, APHIS would likely have to approve the deregulation because it is constrained to withhold deregulation only “if it concluded that the product itself was a pest, or if it could somehow boost pests.”

Indeed, very few plants have ever met this criterion; as a result, APHIS has not denied any of the 127 deregulation petitions it has received. The problem is growing; as Oregon Live reports,“Roughly 60 GE organisms now fall outside the agency’s authority because they weren’t made with a plant pest, and all can be released into the environment without review. A soybean has already been commercialized, and an anti-browning button mushroom has drawn media attention. But the list also includes four grasses developed by Scotts.”

Carol Mallory-Smith, PhD, a professor of weed science at Oregon State University, worries that something more harmful than bentgrass may get through this regulatory hole: “While Roundup resistance is a pain for growers and land managers, it’s a relatively benign trait in the wild; it offers a competitive edge only when plants get sprayed with herbicide. But what about a potentially weedy plant that’s been modified to tolerate drought or salt or heat? That would give the species a major advantage, she says. ‘All of a sudden, you are looking at something that could have very different environmental impacts.’” In January 2017, the USDA abdicated control over GE bentgrass.

Eastern Oregon landowners may be glad to hear that Scotts has come up with yet another herbicide, Reckon, that may control the GE bentgrass more effectively during summers. But every GE or pesticide-based “fix” proposed by industry seems to come with a litany of new risks and problems. That, of course, underscores Beyond Pesticides’ fundamental argument: use of pesticides and herbicides is not only toxic to human and animal health, and to the environment generally, but also, is a profoundly unsustainable approach to plant or animal “pests” because it generates a Pandora’s box of other problems.