An environmentally relevant concentration of Roundup caused changes in the gut microbiome of rats, according to a new study published by the team led by Professor Gilles-Eric Séralini at the University of Caen, France. 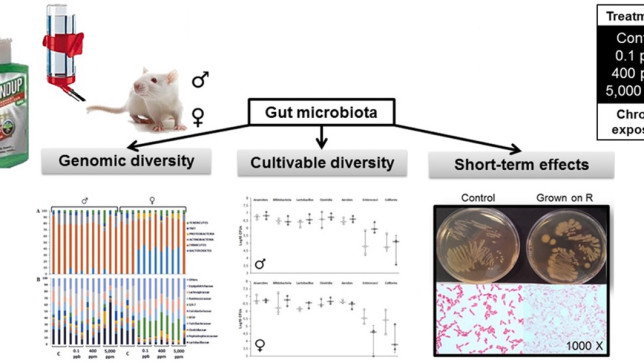 GM Watch’s analysis of the study and its findings follows. Find the full study here.

Analyses were carried out of the faecal samples from rats used in the long-term Seralini study. The faeces from 3 animals per Roundup treatment group were analysed for gut microbiome.

In addition, bacteria were grown in vitro from the faeces of control animals and treated with increasing concentrations of Roundup.

The main findings were a sex-specific alteration in the gut microbiome of female rats only, tested in vivo. Specifically, there was an increase in the Bacteroidetes family S24-7 and a decrease in the Lactobacillacea family of bacteria.

The same gut microbiome alterations were observed in vivo at all of the three doses of Roundup administered. Thus there was no dose-response effect (in which the effect changes with dose).

Bacteria grown in vitro from the faeces of control animals and treated with increasing concentrations of Roundup showed growth inhibition. This demonstrated a direct growth inhibitory effect of Roundup, but only at high concentrations that far exceeded the doses that the female rats were exposed to in the in vivo experiment.

One limitation of the study was that faeces from only three animals per test group of 10 from the long-term study were analyzed – a small sample.

A possible interpretation of the results is that there is a direct effect of Roundup on the gut microbiome. The authors offer extensive arguments supporting this interpretation. However, some counter-arguments cast doubt on it – notably, that there were no differences in effect between the different doses. Building on this fact, it is known from other studies that surfactants such as those present in glyphosate herbicide formulations (e.g. Roundup) have profound effects on the gut microbiome. Thus increasing doses of Roundup would be expected to result in a more pronounced alteration in gut microbiome. Yet this linear dose response (in which effect increases with dose) was not seen in this study. The in vitro experiments show gut bacterial growth inhibition only at high concentrations.

The authors suggest that gut microbiome “resilience” (that is, adaptation to external disruptive agents) may account for this lack of a dose response to increasing dose of Roundup.

However, there are two points worth taking into account that can provide a more consistent and coherent explantation for the lack of a dose response to Roundup exposure.

First, in vitro experiments in this study show gut bacterial growth inhibition only at high concentrations, suggesting that the alterations in the gut microbiome in vivo may be an indirect rather a direct effect of the Roundup.

Second, the authors acknowledge that it is well documented that functional disturbances in organs distant from the gut, especially the liver, are often associated with marked changes in the gut microbiome. It has been demonstrated that even the lowest dose Roundup treatment group in this study suffered from marked liver structural and functional damage reflective of non-alcoholic fatty liver disease (NAFLD) and non-alcoholic steatohepatosis (NASH). The lowest dose of Roundup produced as profound a liver dysfunction as the highest dose. In other words, with regard to the liver damage, the researchers did not see a linear dose response.

Similarly, and as we have seen, the alterations in the gut microbiome observed in these same female rats do not follow a linear dose response. Thus it is quite plausible that they are a result of the liver dysfunction.

This provides the most coherent explanation for the findings of alterations in the gut microbiome.

The health implications of this experiment for humans are unknown. However, this new study has produced the first in vivo evidence that Roundup can bring about alterations in the gut microbiome, including at an environmentally relevant dose, either directly or indirectly. These are interesting and very important observations and should be repeated using larger groups of animals. This should include a comparison of glyphosate alone and Roundup at equivalent concentrations, to ascertain which component of this herbicide formulation (active ingredient, adjuvants, or a combination of the two) is responsible for the changes in the gut microbiome. Furthermore, a strong link between Roundup exposure and liver damage has already been demonstrated and should be further investigated.
—

Sex-dependent impact of Roundup on the rat gut microbiome

• We have examined the long-term effects of Roundup on rat gut microbiota.
• 141 bacteria families were identified by a high-throughput sequencing approach.
• Roundup caused an alteration of the Firmicutes to Bacteroidetes ratio.
• An environmental concentration of Roundup has a sex-dependent impact on rat gut microbiome.

A growing body of research suggests that dysbiosis of the gut microbiota induced by environmental pollutants, such as pesticides, could have a role in the development of metabolic disorders. We have examined the long-term effects of 3 doses of the Roundup(R) herbicide (made of glyphosate and formulants) on the gut microbiota in male and female Sprague-Dawley rats. A total of 141 bacteria families were identified by a 16S sequencing analysis approach. An OPLS-DA analysis revealed an increased Bacteroidetes family S24-7 and a decreased Lactobacillaceae in 8 out of the 9 females treated with 3 different doses of R (n = 3, for each dose). These effects were confirmed by repetitive sequence-based PCR fingerprinting showing a clustering of treated females. A culture-based method showed that R had a direct effect on rat gut microbiota. Cultivable species showed different sensitivities to R, including the presence of a high tolerant or resistant strain identified as Escherichia coli by 16S rRNA sequencing. The high tolerance of this E. Coli strain was explained by the absence of the EPSPS gene (coding glyphosate target enzyme) as shown by DNA amplification. Overall, these gut microbiome disturbances showed a substantial overlap with those associated with liver dysfunction in other studies. In conclusion, we revealed that an environmental concentration of R (0.1 ppb) and other two concentrations (400 ppm and 5,000 ppm) have a sex-dependent impact on rat gut microbiome composition and thus warrants further investigation.