Three U.S. nonprofit groups filed  a suit Thursday against Mississippi based Sanderson Farms, Inc. for falsely advertising products that contain a wide range of unnatural and in some cases prohibited substances, as “100% Natural.” Substances include antibiotics, steroids, hormones and even a drug with hallucinogenic effects. 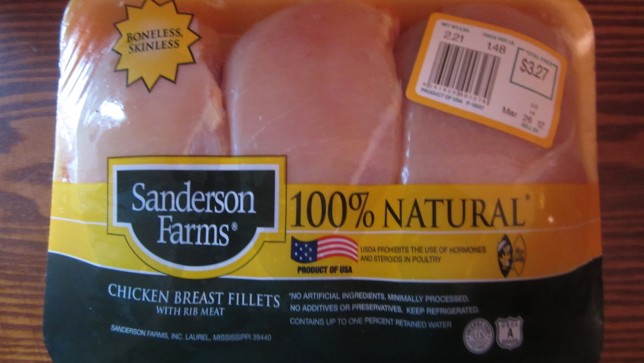 The groups suing Sanderson are Organic Consumers Association (OCA), Friends of the Earth (FoE), and Center for Food Safety (CFS).

Sanderson Chicken claims its chicken is 100% Natural or “nothing but chicken.” But recent testing conducted by the National Residue Program of the U.S. Department of Agriculture’s (USDA) Food Safety and Inspection Service (FSIS) found 49 instances in which samples of Sanderson products tested positive for residues of synthetic drugs that are not “100% Natural.”  Thirty-three percent of the 69 FSIS inspections, conducted in five states, uncovered residues that no reasonable consumer would consider “natural.”

• Eleven instances of antibiotics for human use, including chloramphenical, which is prohibited for use in food animals.
• Positive results for ketamine, a drug with hallucinogenic effects, using testing methods normally applied to beef and pork. Valid testing methods have not been developed for ketamine in poultry, because ketamine is not approved for use in poultry.
• Ketoprofren, an anti-inflammatory drug
• Predisone, a steroid
• Traces of growth two hormones: melengesterol acetate and a beta agonist ractopamine. Both are banned in chicken production.
• Six instances of residues of amoxicillin, a medically important antibiotic for human use and one that is not approved for use in poultry. Deserves further investigation because, similar to ketamine, valid testing methods have been developed only for beef.
• Three instances of penicillin residue at up to 0.285 ppb, for which the residue regulatory limit is zero.
• Positive test results for the pesticides abamectin and Emamectin, using testing methods that apply to pork.

“Consumers should be alarmed that any food they eat contains steroids, recreational or anti-inflammatory drugs, or antibiotics prohibited for use in livestock—much less that these foods are falsely advertised and labeled ‘100% Natural,’” said Ronnie Cummins, OCA’s international director. “Sanderson’s advertising claims are egregiously misleading to consumers, and unfair to competitors. The organic and free-range poultry sector would be growing much more rapidly if consumers knew the truth about Sanderson’s products and false advertising.”

“Drugs in our chicken is anything but natural,” said Kari Hamerschlag, FoE’s deputy director of food and technology.  “This scandal is a wake-up call to all the consumers who want healthier meat. The widespread presence of drugs in Sanderson Farms chicken reflects the excessive use of antibiotics and other chemicals used to keep animals alive in the filthy, inhumane, factory-farm conditions in which the birds are raised.”

“Sanderson Farms’ claim that there is ‘only chicken in [their] chicken’ is an outright lie,” said Paige Tomaselli, senior attorney at CFS, and co-counsel in the case. “The pharmaceuticals and other contaminants that FSIS found in Sanderson’s chicken present potential human health and food safety risks. Consumers are being deceived in thinking that these products are natural and wholesome.”

With FY 2016 sales of $2.816 billion, Sanderson Farms sells chicken in California and other states, under its own brand name and private labels, through retail stores such as Shaw’s, Albertsons, Food 4 Less, Foods Co, WinCo Foods and others. Sanderson chicken is also distributed to institutions, and is sold to casual dining outlets, such as Arby’s, Darden Restaurants (which owns Olive Garden, Longhorn Steakhouse, Yardhouse, Capitol Grill and others), Dairy Queen and Chili’s.