Glyphosate testing on urine and food products, carried out by the Portuguese No GMO Coalition in cooperation with the Detox Project, has revealed much higher levels of the World’s most used herbicide in Portugal than in other EU countries. 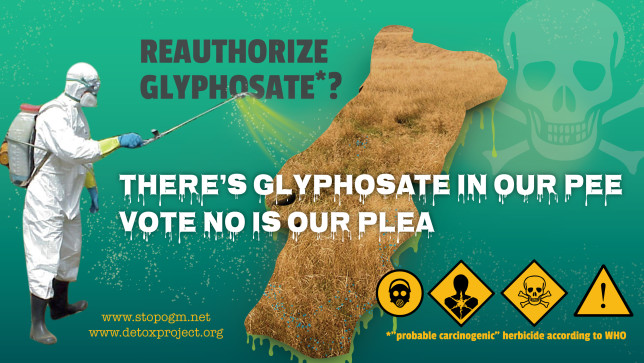 There has been a heated political and public debate since the release of the results in Portugal and the state-owned TV channel RTP has covered the story all week (see video of top headline news here).

Glyphosate, which is a probable human carcinogen according to the World Health Organization’s cancer agency IARC, is the most used herbicide in Portugal, as it is all over the World. More than 1600 tons of glyphosate are sold every year in the country which, beyond agricultural use, is also sprayed widely in urban areas both by local councils and gardeners.

It has been over ten years since any official testing for the presence of glyphosate in food, soil, water, air or people was conducted by the Portuguese authorities. This unprecedented void was partially filled last week with the publication of urine analysis results from 26 Portuguese volunteers as well as some food samples.

Although Portugal’s Ministry of Agriculture monitors food annually for the presence of over 300 pesticide residues, glyphosate has been excluded from these analyses. The same goes for tap water, since the Ministry does not include glyphosate in the list of substances to be tested by utility companies.

When formally asked at the beginning of this year, the Ministry produced no test results, not even those required by European Union regulations, claiming theoretical modeling showed routine analysis was unnecessary.

The testing comes at a crucial time for glyphosate in the European Union as member states are set to vote later this month on the re-licensing of the chemical, which is the base of both GMO and conventional agricultural systems.

The LC/MS/MS method used for this glyphosate testing in urine, at a U.S. based University laboratory, is recognized by regulators and mainstream science worldwide for producing accurate results on herbicides and pesticides. Previous testing methods, such as the ELISA method, used by some NGOs have been questioned by many due to the fact that they can give irresponsible and inaccurate results.

26 volunteers were tested by the Portuguese No GMO Coalition, glyphosate was detected in 100% of the urine samples. In Switzerland, in 2015, a similar testing program detected glyphosate in 38% of cases and, in 2013, sampling carried out by Friends of the Earth in 18 European countries showed 44% of the people to be contaminated.

The average level of glyphosate in the Portuguese urine samples was 26.2 ng/ml (parts per billion – ppb), which compared to previous bio-surveys is shockingly high compared to other EU results:

Some other relevant data from the Portuguese results:

– the three youngest volunteers (aged between 7 and 19 years old) presented an average value higher (26.7 ng/ml) than the whole group, a disproportion that was also identified in the German study;

– there was no clear difference in the average values of the 4 volunteers that, being professional gardeners, may have been expected to have higher levels (the other 22 were all urban dwellers with no professional exposure);

– the values above 20 ng/ml are, according to the available literature, the highest concentrations ever found in people with no professional exposure to glyphosate.

Some food samples were also analyzed with the support of The Detox Project, using a U.S. based laboratory and an LC/MS/MS validated testing method.

Director of Sustainable Pulse and The Detox Project, Henry Rowlands stated Monday; “These results from Portugal are just the start of a global testing revolution that aims to hold regulators, chemical companies and food producers to account. Glyphosate is now on the agenda for consumers and farmers across the World. The discovery of the herbicide in our bodies and our food at hormone hacking levels is very alarming.”

Stone-Age industry funded science suggested that the higher the dose of a chemical the more dangerous it was, however modern independent science has discovered that many toxic chemicals have as much or more of an influence on our health at low doses– these chemicals are known as hormone hackers (endocrine disruptors).

A study from March 2015 stated that the health costs to the European Union of hormone hacking chemicals is over $ 150 Billion per year! The study stated that lower IQ, adult obesity and 5% or more of autism cases are all linked to exposure to endocrine disruptors.

Glyphosate is likely to be one of these hormone hacking chemicals according to independent science. Find more information on this here.