Leading members of the European Parliament said Wednesday that they considered the European Commission’s plan to re-license glyphosate for 10 years as “inappropriate” and “unacceptable”. 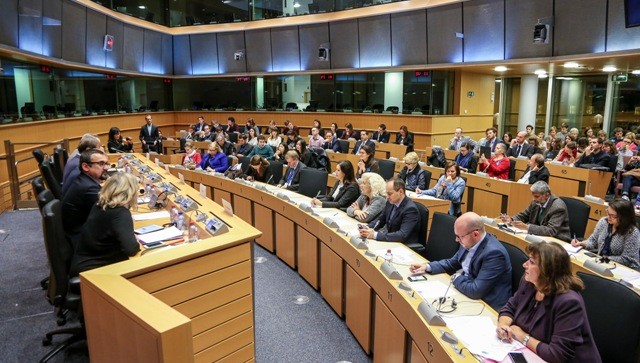 At a meeting of the European Parliament’s “MEPs Against Cancer”, a large audience listened to a briefing on “Cancer and Glyphosate”, regarding the most used herbicide in the EU and the World.

Concerns about the carcinogenic properties of glyphosate-based herbicides have increased after the World Health Organization’s International Agency for Research on Cancer (IARC) re-classified glyphosate as “probably carcinogenic to humans” last year.  The European Commission’s Pesticides Committee is due to take a decision on re-licensing in May, and is expected to vote on an adjusted Commission proposal to extend the licence for a decade.

The European Parliament recently voted to back a 7-year approval with many restrictions, including a ban on all non-commercial use, however the European Commission did not include the restrictions in its adjusted and leaked proposal.

President of MEPs Against Cancer Alojz Peterle MEP told the meeting: “Given the wide use of herbicides containing glyphosate in Europe, this forthcoming decision is an important issue for cancer prevention, not only for farmers but also for every consumer. The Commission should respect the Parliament’s resolution on glyphosate. I find it inappropriate for the Pesticides Committee to decide on this before further information is available.”

Pavel Poc MEP Vice-President of MEPs Against Cancer said: “The new Commission proposal to re-authorise glyphosate for ten years without any specific restrictions is completely unacceptable, for agricultural uses which contribute most to people’s exposures but especially when it comes to its use in public areas and its non-professional uses.”

“The contradictory assessments by the European Food Safety Authority (EFSA) and the WHO agency (IARC) on the safety of glyphosate show the need to revise the whole authorisation process for pesticides in the EU in favour of more transparency, efficiency and democratic control.”

Dr. Dana Loomis, from the monographs section of IARC producing the report, described the scientific evaluation of glyphosate carcinogenicity undertaken by the UN body for whom she works.

Wendy Tse Yared, Director of the Association of European Cancer Leagues, which brings together national cancer leagues in different European countries, said: “IARC’s findings suggest that banning glyphosate should be part of Europe’s cancer prevention policy. We have posted information on our website and will contact our members about concerns on glyphosate and cancer in coming weeks.”

Many different cancer societies and medical groups in Portugal, France, Belgium, UK and Malta are calling for greater health protection by reducing or eliminating glyphosate use. For example, le Ligue contre le cancer in France, with a membership of 700,000, has launched a petition against renewal of the licence for glyphosate by the European Union authorities. It recently welcomed the French government’s stance against the renewal of glyphosate’s authorisation.

The Health and Environment Alliance (HEAL) has called on Europe’s influential national cancer societies to urge EU member governments to put an immediate ban on glyphosate-containing herbicides at national level, and to oppose glyphosate renewal at EU level. Lisette van Vliet, HEAL’s Senior Policy Adviser is also very concerned about the inadequacy of the EFSA assessment. She says: “The WHO’s IARC has shown that EFSA is not infallible, and if EFSA had done as good a job as IARC, glyphosate could not legally be renewed in the EU because the EU law forbids cancerous substances from being authorised”.