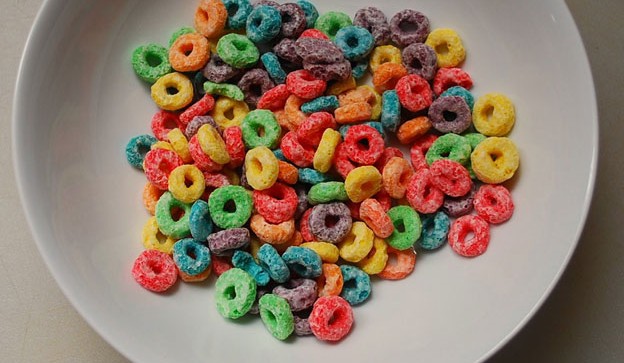 Tests also documented the presence of glyphosate at 0.12 mg/kg, the main chemical ingredient of Roundup® weedkiller.

The public interest nonprofit recently launched “OPERATION: LABEL GMOs” to test popular food products for genetically engineered ingredients (GMOs) and glyphosate, which is heavily sprayed on GMO crops. There is substantial and growing peer-reviewed scientific evidence that both GMOs and glyphosate are damaging to health (see supplementary information below). GMO Free USA plans to expand testing to include 2,4-D, dicamba, atrazine, and neonicotinoid insecticides.

“We find it disturbing that Kellogg’s is feeding children unlabeled GMOs and toxic herbicides. Statistics show that this is the first generation of children that are sicker than their parents. Is Kellogg’s endangering our children? Based on the growing body of scientific evidence, we believe so and we hold Kellogg’s accountable. Parents need to know what they’re feeding their children, and Kellogg’s is spending millions to keep the composition of their products hidden,” says Diana Reeves, Executive Director of GMO Free USA and mother of 3.

Reeves echoes the sentiment of a rapidly growing movement in the U.S. that is demanding the removal of GMOs from the food supply and the reduction of pesticide use in agriculture.

GMO Free USA is calling on Kellogg’s to commit to removing GMO ingredients from all of their products and enroll in Non-GMO Project Verification.

GMO Free USA is a 501c3 nonprofit that educates consumers and other stakeholders about the potential hazards of GMOs. GMO Free USA advocates for the application of the Precautionary Principle and the removal of GMOs from the food supply until they are proven safe. www.gmofreeusa.org Press may contact Diana Reeves or Luan Van Le at 347.921.1466 or [email protected]

The FDA, EPA, and USDA allowed the insecticidal GMO corn and the glyphosate discovered in Froot Loops to be commercialized without ever conducting human safety tests.

An in-vitro study found that the insecticides in this corn may be toxic to human cells. Feeding studies conducted on mammals found adverse effects, including immune system disturbances, signs of organ toxicity, disturbances in the functioning of the digestive system and male reproductive organ damage.

The level of glyphosate detected could kill beneficial gut flora as documented by a study on chickens. An in-vitro study on human cells at minute real-world environmental levels of exposure found that glyphosate was able to effectively substitute for estrogen in stimulating growth of hormone-dependent human breast cancer cells. Several studies also suggest that glyphosate bioaccumulates in our bodies.

Glyphosate was found in breast milk in recent tests. All of this research raises red flags that Kellogg’s and the FDA have ignored.

Despite testing for hundreds of pesticides in food commodities, the USDA claims they do not test for glyphosate residue. Why would the USDA not test for residue of the most widely used agricultural herbicide in the world?

Pediatrician Michelle Perro states, “Digestive health is rapidly declining in children. If children eat conventionally grown food, they will potentially be eating glyphosate, pesticide ingredients and GMOs, as documented by these laboratory tests [of Froot Loops]. What is happening to our children is several-fold: Alteration of their microbiome with subsequent issues of detoxification, production of vitamins and repair of their intestinal lining due to the anti-microbial effects of glyphosate. Additionally, they are mineral-deficient. Since glyphosate, applied to plants, is known to bind important minerals and make them unavailable to human and animal consumers, it may be contributing to this mineral deficiency. There is laboratory evidence of zinc deficiency, for example, which then leads to immunological weakness/impairment since zinc is an important co-factor in immune system function. The bioaccumulation effects of glyphosate have not been addressed in children and the standards of safety are arbitrary and not based on any clinical evidence.”