Following the announcement last week that 1200 litres of GM purple tomato juice is being sent to the UK from Canada for testing, before the GM tomatoes themselves enter shops across the country, EU and US scientists have expressed serious concerns. 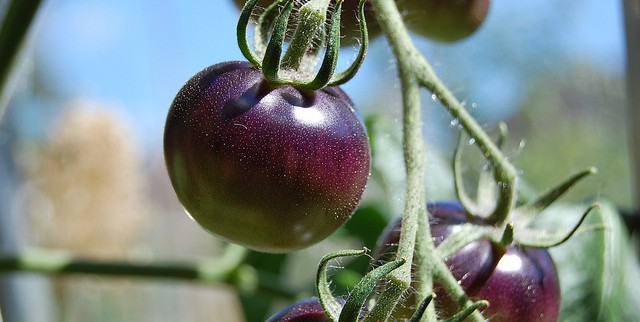 The aim is to use the GM tomato juice in research to conduct a wide range of tests including examining whether the anthocyanin they contain has positive effects on heart patients in UK hospitals. However, according to a number of EU and US scientist sources, these GM tomatoes have never been tested for toxicity in animal feeding trials, which is a legal requirement in the EU.

If regulators in the EU do allow human trials before animal testing, this will violate EU regulations for GMOs and at worst would border on a criminal act, given that it is possible that an adverse reaction might take place. Canadian regulators are also set for similar legal problems, if as expected they allow GM tomatoes to be sold in the country within 2 years.

The GM purple tomatoes were invented at the John Innes Centre in Norwich by a team led by Prof Cathie Martin. Due to EU regulations the tomatoes were then sent to Canada, where they were developed further.

The GM tomatoes contain the pigment, known as anthocyanin, which is an antioxidant and claims have been made suggesting that they could help fight cancer. These claims are based on the results of a small scale test on mice which has been refuted or questioned by experts, including the UK’s National Health Service (NHS) and Cancer Research UK (CRUK).

GM Watch has outlined the main points regarding why GM purple tomatoes are not required and also a number of scientific points on why they could be dangerous to human health:

1. A general point about anthocyanins: There are over 200 types and they constitute the main red/purple pigment class found in common fruit and vegetables, e.g. red cabbage, red onions, berries, etc. (Note: the purple of beetroot is not an anthocyanin but another nonetheless valuable antioxidant.) Thus one can have a diet rich in anthocyanins without resorting to GM purple tomatoes. What Cathie Martin and her colleagues have produced is totally unnecessary given the abundance of anthocyanins already in food plants.

2. The Ti-plasmid transgene cassette contains a kanamycin (antibiotic) resistance gene, which would have been used in the initial selection of the GM transformants. They don’t mention the use of kanamycin selection in the methods section of their paper but there is no other way they could have conveniently selected for transformants. It is conspicuous they avoid mentioning this, perhaps in order to avoid attracting attention to it, in light of the fact that the EU has asked for antibiotic resistance genes not to be present in the final GM plant.

3. The transgenes involved are two from snapdragons and are a class of proteins known as “transcription factors”; ie proteins that control the expression of many other genes. Thus there is no way that these two transcription factor genes would have just turned on the target genes for anthocyanin synthesis and not interfered with the function of others. The data they present looking at gene expression profiles is inconclusive in this respect using a somewhat outdated, crude method compared to what can be done now. The tomato genome sequence has now been determined and so state-of-the-art methods such as gene-chip microarrays or better still total mRNA (transcriptome) analysis by high throughput sequencing can now be used to properly assess what the GM process has actually resulted in.

5. No generic toxicity testing, either short- or long-term, of these tomatoes has been published and we must assume it has not been done. The only additional work published with these GM purple tomatoes is to show that high anthocyanin in the skin extends shelf life. No work has been done to see if nutrient content is preserved during the time of extended shelf life. If the nutrient content is not preserved, then it’s a rip-off in terms of what the consumer is getting.

6. The whole idea of GM “nutritionally enhanced” foods starts with two major conceptual flaws; (i) there is something wrong with the diversity of foods we have already and (ii) that high levels of a single nutrient is going to result in significantly improved health status – in this case, warding off cancer. This is nonsense on both counts.

So in allowing these GM tomatoes to be grown on their territory, the Canadian authorities, rather than being more “enlightened”, as Martin claims, appear to have been “endarkened” by pro-GM propaganda.

For those who are fixated on a purple tomato-related answer to cancer, a peer-reviewed study found that extracts of the fruit of non-GM anthocyanin-rich tomatoes inhibited two human cancer cell lines in a dose dependent manner.