The U.S. Supreme Court on Monday upheld Monsanto’s biotech seed patents, dealing a blow to Organic Seed Growers and Trade Association (OSGATA) who were attempting to ward off lawsuits by the company against farmers. 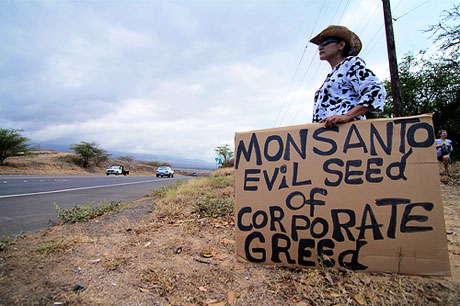 OSGATA, made up of 83 organic and conventional family farmers, seed companies and public advocacy interests, sued Monsanto in March 2011 seeking to prohibit the company from suing them if their fields became inadvertently contaminated with its patented genetic traits for corn, soybeans, cotton, canola and other crops.

The specialty seeds are genetically engineered to withstand dousings of glyphosate, the main ingredient in Monsanto’s Roundup herbicide.

“The Supreme Court failed to grasp the extreme predicament family farmers find themselves in,” said Maine organic seed farmer Jim Gerritsen, President of OSGATA. “The Court of Appeals agreed our case had merit.  However, the safeguards they ordered are insufficient to protect our farms and our families. This high court which gave corporations the ability to patent life forms in 1980, and under Citizens United in 2010 gave corporations the power to buy their way to election victories, has now in 2014 denied farmers the basic right of protecting themselves from the notorious patent bully Monsanto.”

“The Appellate Court decision could leave Canadian farmers out in the cold because their protection may not extend to Canada at all,” said Saskatchewan organic grain farmer Arnold Taylor, a member of plaintiff member Canadian Organic Growers (COG). “Like many Canadian farmers, we sell crop into the United States and can therefore be liable to claims of patent infringement by Monsanto.”

OSGATA asked Monsanto for a pledge not to sue, but the company refused, saying: “A blanket covenant not to sue any present or future member of petitioners’ organizations would enable virtually anyone to commit intentional infringement.”

The biotech crops are widely used throughout the United States. Monsanto has sued more than 100 farmers for patent infringement, winning judgments against those found to have made use of its seed without paying required royalties.

OSGATA lost the case in the district court and in the U.S. Court of Appeals for the Federal Circuit.

“Monsanto never has and has committed it never will sue if our patented seed or traits are found in a farmer’s field as a result of inadvertent means,” said Kyle McClain, the company’s chief litigation counsel.

“The lower courts agreed there was no controversy between the parties,” McClain added, “and the Supreme Court’s decision not to review the case brings closure on this matter.”